Crypto regulation world: How laws for digital assets changed in 2022

Effective regulations are one of the key gateways to cryptocurrency’s mainstream adoption. Due to greater compliance, crypto businesses saw broader acceptance from regulators worldwide. While the crypto ecosystem was awarded countless operational licenses and exposure to new markets, the fall of Terraform Labs, FTX and Celsius, among others, had a negative impact on the industry’s reputation with investors and regulators alike.

As we look back on 2022 and all it brought for the cryptocurrency industry, we’re highlighting how the regulatory landscape has changed for cryptocurrencies and the blockchain industry as a whole.

China’s blanket ban on crypto mining and trading from late 2021 positioned the United States as the torchbearer for crypto disruption by default. The U.S. is not only home to the biggest crypto ATM network, but is also is the highest contributor to the Bitcoin (BTC) hash rate.

Out of all crypto sub-ecosystems, nonfungible tokens (NFTs) took center stage in U.S. politics. What can be considered as a clear win for crypto, the Federal Election Commission (FEC) permitted the use of NFTs for political campaign fundraising incentives.

For many regulators, the collapse of FTX and the arrest of former CEO Sam Bankman-Fried were perceived as a representation of the wrongdoings of the entire crypto community. As a result, it helped recement anti-crypto sentiment among many U.S. politicians, such as Representative Brad Sherman. However, Representative Tom Emmer sided with the crypto community as he pointed out the community’s contribution to tracking Bankman-Fried’s illegal activities. 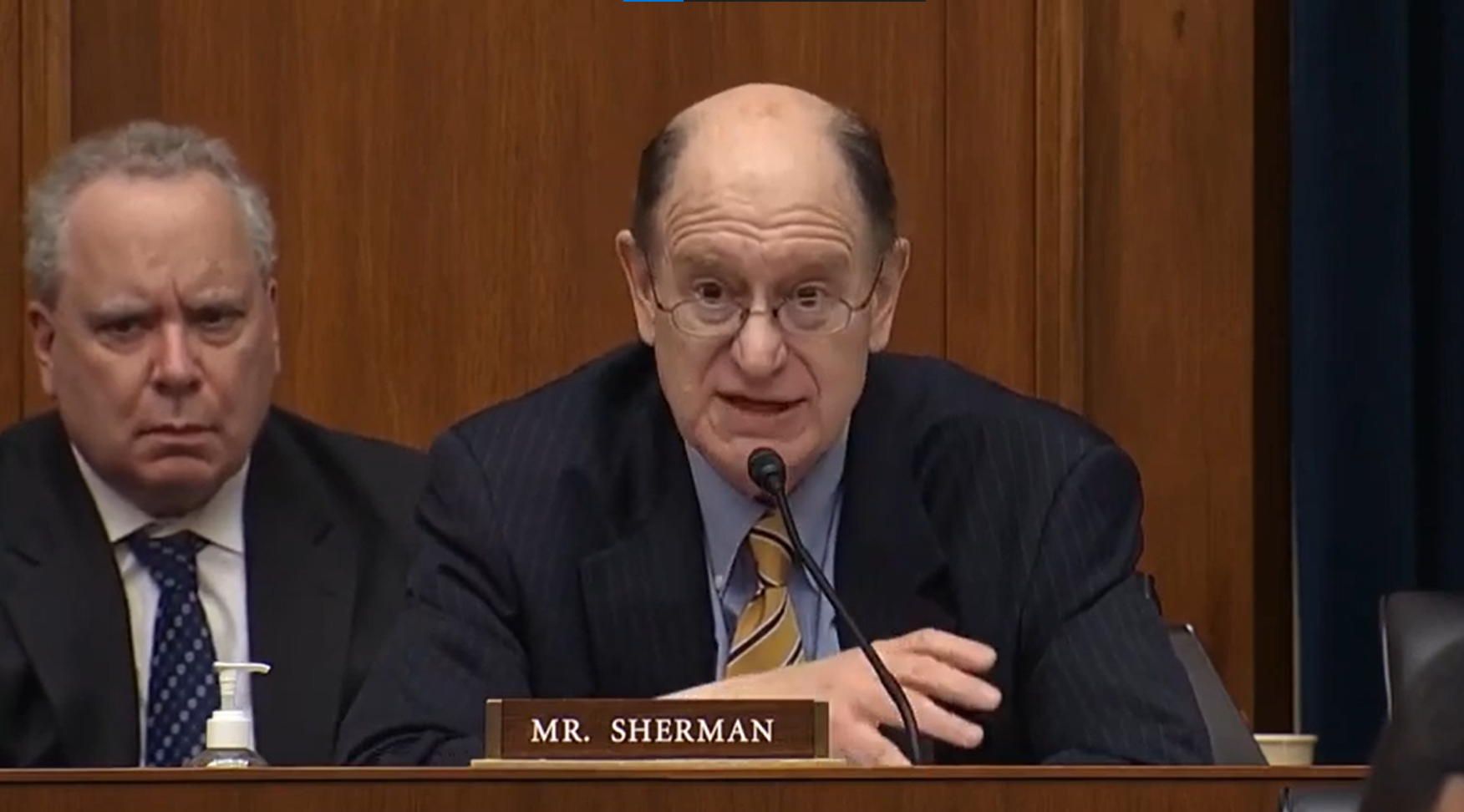 Rep. Brad Sherman during the FTX hearing in front of the U.S. House Committee on Financial Services. Source: YouTube

Similarly, U.S. regulators introduced the Crypto-Asset Environmental Transparency Act to direct the Environmental Protection Agency to report on the energy use and environmental impact of crypto miners.

Farther south, El Salvador still retains its position as the most significant contributor to mainstreaming Bitcoin worldwide. While many pointed out the unrealized losses owing to falling Bitcoin prices faced by the country, President Nayib Bukele announced a new BTC investment strategy in which the country would purchase 1 BTC per day starting from Nov. 17, 2022.

We are buying one #Bitcoin every day starting tomorrow.

Furthermore, in November, Economy Minister Maria Luisa Hayem Brevé introduced a bill confirming the government’s plan to raise $1 billion and invest it into the construction of a “Bitcoin city.”

Despite a slow start, Brazil saw the introduction of a pro-crypto regulation. Late last year, before former President Jair Bolsonaro left office, a bill that sought to legalize the use of crypto as a payment method within Brazil was signed into law. Brazil most recently issued a Payment Institution License to Crypto.com, allowing the crypto exchange to continue offering regulated fiat wallet services to Brazilians.

After careful consideration, numerous Asian regulators softened their anti-crypto stance and chose to allow crypto businesses to run operations. While China loosened its grip on its crypto permaban, India has implemented a new tax regime for crypto.

In the case of China, the Shanghai High People’s Court issued a ruling stating that Bitcoin is subject to property rights laws and regulations. With the court recognizing value, scarcity and disposability in the asset, Bitcoin owners received the right to compensation in a case involving an unpaid loan.

India imposed two new crypto tax policies at the start of the year – one imposing a 30% tax on crypto profits and the other imposing a 1% tax deduction at source on every crypto transaction. The laws had a negative impact on local trading volumes as investors continued to hold their assets in hopes of better regulations. India, during its G20 presidency, which will last until Nov. 30, 2023, has plans to pursue the development of standard operating procedures for cryptocurrencies.

Pakistan’s central bank, on the other hand, signed new laws to expedite the launch of an in-house central bank digital currency (CBDC) amid hyper inflation concerns.

Just like in the United States, the fall of Terraform Labs left a bad taste in South Korean regulators’ mouths. For the island nation, the majority of 2022 was spent tracking down the bad actors responsible for investor losses. Moreover, the country’s 2021 implementation of Know Your Customer requirements saw a drastic reduction in hacking activities throughout 2022.

Europe and the Middle East

The Russia-Ukraine war indirectly showcased cryptocurrency’s prowess in serving the unbanked. As millions lost access to their life savings, cryptocurrencies came into the forefront as a savior.

With $54 M raised by @_AidForUkraine, we’ve supplied our defenders with military equipment, armor clothes, medicines and even vehicles. Thanks to the crypto community for support since the start of the full-scale invasion! Donation by donation to the big victory. Report below. pic.twitter.com/lifHAP8R4f

The European Union’s Committee of Permanent Representatives approved the Markets in Crypto-Assets framework, which aims to create a consistent regulatory framework for cryptocurrencies among European Union member states.

The International Monetary Fund, a major financial agency of the United Nations, called for increased regulation of Africa’s crypto markets. The Central African Republic reportedly passed a bill to legalize the use of cryptocurrencies in financial markets.

The United Kingdom sought regulatory amendments to place the crypto industry under tighter scrutiny. Reacting to the FTX collapse, the U.K.’s HM Treasury issued guidelines for the Financial Conduct Authority to monitor the operations and advertising of crypto companies in the country. This further influenced an upcoming 2023 legislation to restrict crypto services from abroad from operating in the U.K.

This is an historic moment for South Africa:

Today the Financial Sector Conduct Authority (FSCA) declared a crypto asset as a financial product under the FAIS Act.

This Declaration was published in the Government Gazette as well as the FSCA website.

Nigeria banned ATM cash withdrawals over $225 (100,000 nairas) per week to enforce the use of its CBDC, the eNaira. African crypto exchange Yellow Card received regulatory approval to expand its services across the African continent.

While the Dubai Virtual Assets Regulatory Authority issued numerous operational approvals to crypto business in 2022, it had to revoke the Minimum Viable Product license from FTX MENA.

Most recently, Australia overtook El Salvador to become fourth largest crypto ATM hub after the United States, Canada and Spain. Australian financial regulators are carrying forward their efforts from 2022 to create a regulatory framework for stablecoins.

While the above-mentioned triumphs highlight just the cream of regulatory accomplishments, the crypto ecosystem made significant strides throughout the year. With the understanding that regulations are key drivers for mass adoption, crypto firms with robust compliance initiatives are setting the stage for mainstream adoption as we step into 2023.

Check out Cointelegraph’s crypto roundup of 2022 and what it means for the community in 2023.

Nearly 13 million bitcoins have not moved in over a year, an all-time high

Key Takeaways An all-time high of 12.7 million bitcoins have not moved in over a year That translates to two-thirds of the circulating supply Only 7% of bitcoins...
Lees meer
Crypto news English

DXY vs. Bitcoin/USD – a lead-lag analysis

Audius price is up by 95% in 7 days: brace for a major pullback

Audius price has been in a strong bullish momentum this week. It is soaring after the latest listing in Coinbase. Historically, these exchange-linked rallies don't last long. Audius...
Lees meer
Laad meer