On June 16, USDT’s market cap dropped below $70 billion for the first time since October 2021. The drop followed a cascade of repeated declines shortly after the USDT market value reached its all-time high above $80 billion in May.

At the time of writing, Tether USDT’s market capitalization stands at $69.3 billion, up around $300 million from the multi-month low, according to data from CoinGecko. 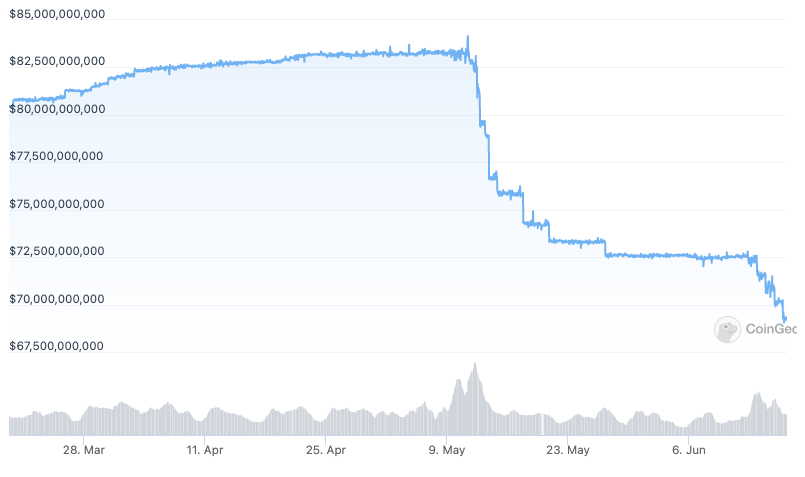 While Tether has been losing its market share over the past few weeks, other stablecoins like the USD Coin (USDC) have been gaining value recently. As such, USDC market cap surged from about $48 billion in mid-May to $55 billion in mid-June.

Tether’s shrinking market cap comes amid the ongoing market panic and uncertainty, with the market capitalization of all cryptocurrencies dropping below $1 trillion for the first time since February 2021.

Related: Total supply of stablecoins dropped sharply for first time ever in Q2

Tether firm has been actively posting statements to assure investors that the company has not been affected by the ongoing crypto lending crisis. On June 13, Tether declared that issues around the crypto lending platform Celsius had nothing to do with the firm and would not impact USDT reserves.

Tether subsequently announced plans to get rid of commercial paper backing for the USDT stablecoin on June 15. The firm did not respond to Cointelegraph’s request for comment.

Members of the crypto community on Twitter have been left bewildered by the beleaguered Celsius Network continuing to pay weekly rewards despite pausing withdrawals two...
Lees meer
Laad meer