The United States equities markets tumbled on June 10 after the consumer price index report showed inflation soaring 8.6% from a year ago, the highest increase since 1981. The latest figures show that talks of inflation having peaked were premature and according to Bloomberg, investors are pricing in key interest rates of 3% by the end of the year.

Continuing its tight correlation with the S&P 500, Bitcoin (BTC) dipped below $30,000 on June 10. Analysts are still divided about the near-term price action but Fundstrat co-founder Tom Lee said in an interview with CNBC that Bitcoin may have already bottomed. However, Lee seems to have toned down his expectations as he said that Bitcoin could “remain flat for the year, possibly up.” 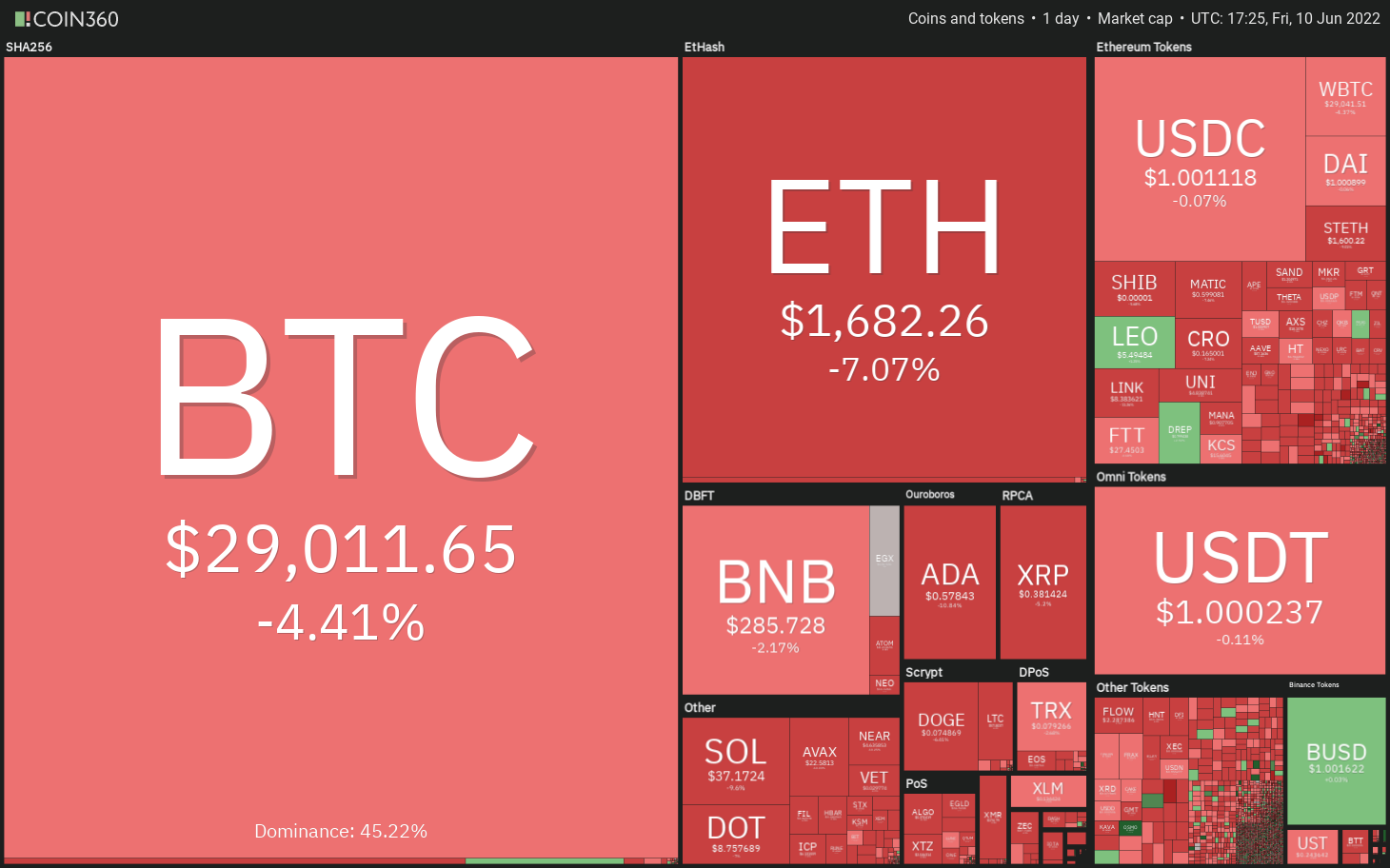 Among the constant flow of negative news, there was a ray of hope from news that Bloomberg expanded coverage of cryptocurrency data on its Bloomberg Terminal to 50 crypto assets. Bloomberg cryptocurrency product manager Alex Wenham, gave positive vibes as he said that institutional interest in digital assets continues to grow.

Now that Bitcoin is trading near swing lows again, is a capitulation-level crisis a threat? Let’s study the charts of the top-10 cryptocurrencies to find out.

The bulls tried to push the price above the 20-day exponential moving average ($30,365) on June 9 but the bears did not relent. The selling continued on June 10 and the bears have pulled the price below the trendline of the ascending triangle.

The 20-day EMA has started to turn down gradually and the relative strength index (RSI) is in the negative territory, indicating advantage to sellers.

If the price sustains below the trendline, it will invalidate the bullish setup. That could pull the BTC/USDT pair down to $28,630 which may act as a strong support but if this level cracks, the decline could extend to $26,700.

Strong selling on June 10 has pulled Ether (ETH) below the critical support at $1,700. If the price sustains below this support, the pair could resume its downtrend.

The ETH/USDT pair could first decline to $1,500 and if this level also gives way, the next stop could be the vital support at $1,300. The bulls are expected to defend this level with all their might.

Contrary to this assumption, if bears fail to sustain the price below $1,700, it will suggest accumulation at lower levels. The first sign of strength will be a break and close above the 20-day EMA. That could open the doors for a possible rally to $2,159.

The indicators are giving a mixed signal because the downsloping moving averages favor the sellers but the positive divergence on the RSI suggests that a relief rally may be around the corner.

Binance Coin (BNB) has been trading below the support line of the symmetrical triangle for the past three days but the bears have not been able to build upon the breakdown. This suggests that selling dries up at lower levels.

The buyers will try to push the price back into the triangle. If that happens, the aggressive bears who may have gone short on the break below the support line may get trapped. That could result in a short-covering, which could push the price above the resistance line of the triangle. Such a move will suggest that the bears may be losing their grip.

Contrary to this assumption, if the price continues lower from the current level and plummets below $273, it will increase the possibility of a break below the critical support of $260. The pair could then start a decline toward the vital support of $211.

The bulls pushed Cardano (ADA) above the 50-day simple moving average ($0.64) on June 8 and June 9 but could not sustain the higher levels. That may have tempted short-term traders to book profits.

The bears are attempting to sustain the price below the 20-day EMA ($0.58). If they manage to do that, the ADA/USDT pair could plummet to the next support at $0.53. If this level also gives way, the decline could extend to $0.44.

Alternatively, if the price rebounds off the current level, it will suggest that the sentiment has turned positive and the bulls are buying on dips. The bulls will then make one more attempt to clear the overhead hurdle at the 50-day SMA. If they succeed, the pair could rally to the breakdown level of $0.74 which may again act as a resistance.

Ripple (XRP) had been trading close to the downtrend line for the past two days. The failure to push the price above the overhead resistance may have attracted profit-booking from the short-term traders.

The XRP/USDT pair has dipped to the strong support of $0.38 where the buyers may attempt to stall the decline. If the price rebounds off the support and rises above the downtrend line, the pair could rally to $0.46.

On the contrary, if bears sink and sustain the price below $0.38, it will complete a bearish descending triangle pattern. That could intensify the selling and pull the price down to $0.33. A break below this support could signal the resumption of the downtrend.

Solana (SOL) is trading between the 20-day EMA ($44) and $37 for the past few days. The buyers tried to push the price above the 20-day EMA on June 9 but the bears held their ground.

The positive divergence on the RSI indicates a minor advantage to buyers while the downsloping moving averages suggest that bears have the upper hand. This uncertainty is unlikely to continue for long. If bears sink the price below $35, the SOL/USDT pair may resume the downtrend, The next stop on the downside could be $30.

Contrary to this assumption, if bulls propel the price above the 20-day EMA, the pair could rally to $50 and then to the overhead resistance at $60.

The bulls struggled to sustain Dogecoin (DOGE) above $0.08 on June 8 and June 9. This may have attracted further selling and the support collapsed on June 10.

The bears will try to build upon their advantage and attempt to sink the price to the vital support of $0.07. A break and close below this level could signal the start of the next leg of the downtrend.

This negative view could invalidate in the short term if the price turns up and breaks above the 20-day EMA ($0.08). That could attract buying from the aggressive bulls which could push the DOGE/USDT pair to $0.10.

The bulls tried to push Polkadot (DOT) back into the symmetrical triangle on June 9 but the bears defended the level aggressively. This suggests that the bears have flipped the support line into resistance.

This bearish view could invalidate if the price rebounds off $8.56 and rises above the resistance line. If that happens, the pair could attract buyers who may then attempt to push the price to $11 and later to $12.50.

Avalanche (AVAX) formed a Doji candlestick pattern for the past two days indicating indecision among the bulls and the bears. This uncertainty resolved to the downside on June 10 and bears are trying to pull the price to the strong support at $21.

The price is stuck between the 20-day EMA ($27) and $21. This tight-range trading is likely to resolve with a range expansion in the next few days. Although the positive divergence on the RSI indicates a minor advantage to buyers, the downsloping moving averages suggest that bears have the upper hand.

If the range expands to the downside and the price drops below $21, it will suggest the resumption of the downtrend, The AVAX/USDT pair could then decline to $18. Alternatively, if the price explodes above the 20-day EMA, it may clear the path for a possible rally to $33 and then $37.

Shiba Inu (SHIB) has been trading close to the strong support at $0.000010 since June 7. Although bulls have defended the support, they have failed to achieve a strong rebound off it.

This increases the possibility of a break below the strong support at $0.000010. If that happens, the SHIB/USDT pair will complete a bearish descending triangle pattern. The pair could then decline to the May 12 intraday low of $0.000009. If this support also cracks, the next stop could be $0.000006.

To invalidate this bearish view, the buyers will have to push the price above the downtrend line. That could clear the path for a possible rally to $0.000014.

A YouTuber started traveling the world to see whether he could survive solely on Bitcoin as a means of payment. In the latest episode of Cointelegraph's...
Lees meer
Crypto news English

For all the gloom and doom in the cryptocurrency market these days, our industry continues to make inroads into mainstream tech. This week, I had...
Lees meer
Laad meer