P2E gaming is in a rut, but Axie Infinity (AXS) could rebound for 3 key reasons

Play-to-earn gaming was one of the breakout sectors of the cryptocurrency market in 2021 and the trend was led by Axie Infinity (AXS), a mobile, blockchain-based game where users collect, breed, raise and battle NFTs called Axies for monetary rewards.

As the market topped and then entered what has become a deep bear market, AXS price retraced from an all-time high near $170 to its current price at $15.20 following several setbacks, including a $600 million hack of the Ronin sidechain that hosts the game. 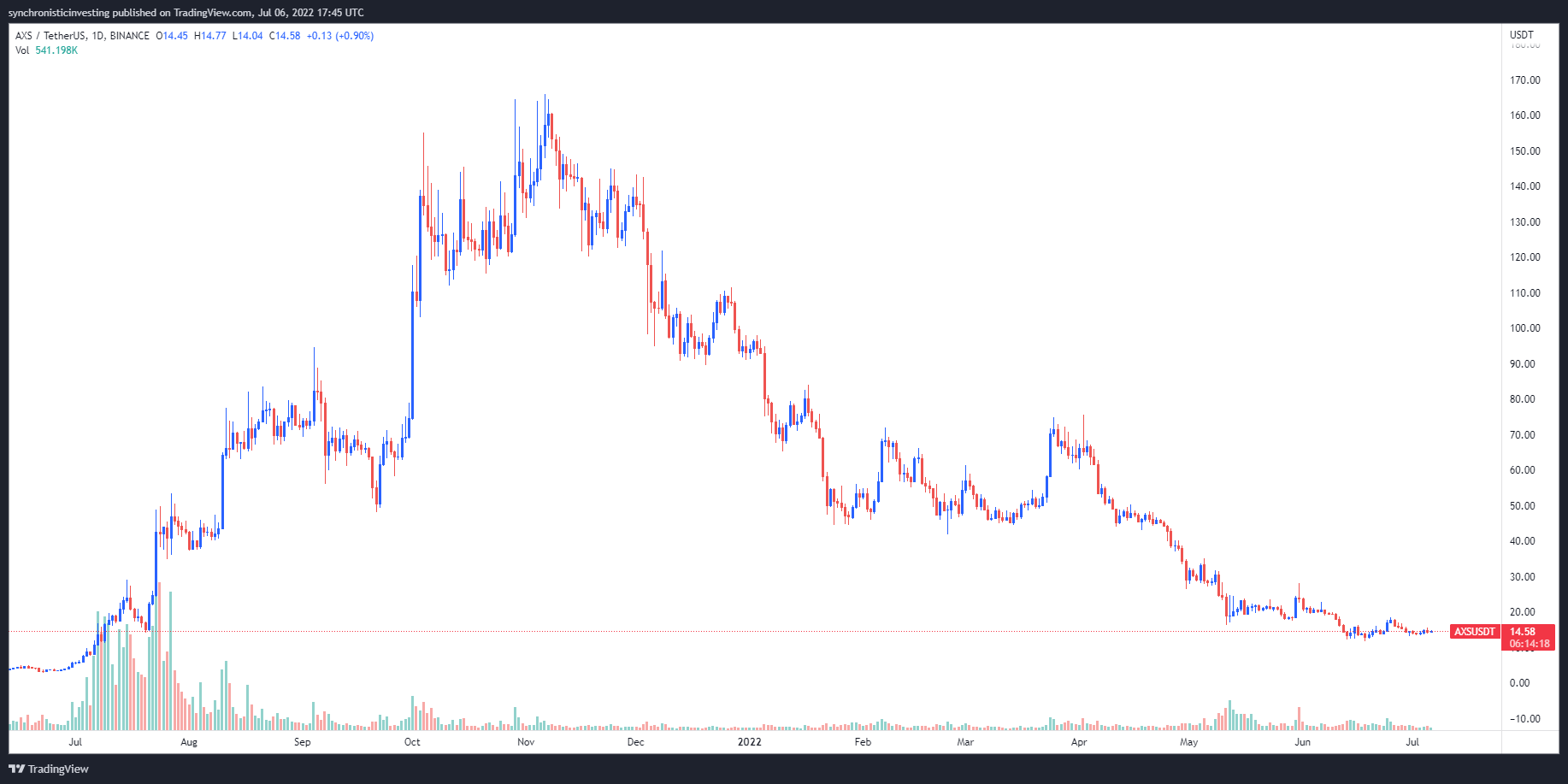 Currently, the future of P2E gaming remains in question and advocates are closely watching to see if this former unicorn had turn the ship around. Let’s take a look at some of the developments taking place within Axie Infinity and determine whether any of them are bullish for the short and longterm.

The launch of land staking

The most recent development to arise out of the Axie Infinity ecosystem is land stake parcels as a method for earning AXS tokens.

How much can you earn in Land Staking?

With Axie Infinity releasing land staking, we are curious about how much $AXS can holders accumulate per week!

Thoughts on this? #AxieInfinity #PlayToEarn pic.twitter.com/jNmahoxWSi

Based on the stats provided by the Ronin Chain explorer, land staking has been popular among holders and at least 87% of each of the different levels of plots have already been staked.

In addition to the success of land staking, several land plots recently sold for over 130 Ether (ETH) each, which suggests that the level of interest in the game is still high.

While land owners have been excited about the new income opportunity, some community members have concerns about what effect the daily rewards of 11,194.62 AXS will have on the price of the token as the supply inflates.

The platform also offers AXS staking with a current yield of 72%, but only 38.47% of the current circulating supply is being staked, which indicates that a majority of the supply is available in the open market and could potentially be sold off.

The recent reopening of the Ronin bridge could also be another positive sign for Axie, especially considering that it had been disabled following a $600 million hack in March of this year.

The Ronin Bridge is open!

• All user funds are fully backed 1:1 by the new bridge.
• The bridge has undergone an internal audit and two external audits.
• We are still on track to release Land Staking this week.

According to Axie Infinity, the assets on the bridge are “fully backed 1:1,” and the project added 11 new validators, circuit breakers and the two external audits were completed. All user funds that were lost have been reimbursed, making members of the community whole.

The reopening of the Ronin bridge and the launch of land staking has had a noticeable effect on the volume transacted according to data from DappRadar.

These developments have also prompted a slight uptick in the number of daily users and transactions on the network, but these figures remain well below the 2021 highs of 744,000 users and 6.7 million transactions.

The community responds positively to the current changes

Community reactions to the recent developments have been mostly positive, with many eager to re-engage with the game now that it has finally moved past a few major bumps.

According to early Axie Infinity investor and Cointelegraph contributor Alyssa Exposito, “land staking has brought about a surge of energy that the community needed after we lost a huge amount in the treasury fund.”

Exposito also mentioned the Axie creator program that enables community members to build out games on the software development kit (SDK) as something that is exciting users of the platform, “Especially with the integration of RON as a means to engage and transact on the network.”

Exposito highlighted the ecosystem’s effort to get community members more involved with governance and building on the protocol as the developments that the community is most excited about.

“I think once people begin to see and take notice of how the project enables and helps fund other creators to build on top of it, it’ll gain more traction on the possibilities of blockchain gaming.”

Generally, the protocol has taken the necessary steps to recover from the Ronin hack and it seems to be keeping up to date with the major milestones outlined on its roadmap. Aside from what the project can do internally, its fate is largely tied to the fate of the P2E sector as a whole.