Capitulation ongoing but markets not at the bottom yet: Glassnode

Bitcoin wealth is being distributed from weak hands to strong hands due to ongoing capitulation from retail investors and miners, signaling that the bottom may be close.

The latest ‘The Week On-Chain’ report from blockchain analysis firm Glassnode on July 11 explains that market capitulations have been ongoing for about a month and that several other signals suggest bottom formations in Bitcoin prices.

However, Glassnode analysts wrote that the bear market “still requires an element of duration” as Long-Term Holders (LTH), who tend to have greater confidence in Bitcoin as a technology, increasingly bear the greatest unrealized losses.

“For a bear market to reach an ultimate floor, the share of coins held at a loss should transfer primarily to those who are the least sensitive to price, and with the highest conviction.”

They added that the market may need further “downside risk to fully test investor resolve, and enable the market to establish a resilient bottom.”

Unrealized losses are losses in the dollar value of a holder’s position before selling.

Glassnode made this assessment based on the observation that in previous bear markets in 2015 and 2018, LTH held over 34% of the Bitcoin (BTC) supply that was in unrealized loss. The STH proportion accounted for just 3% to 4%.

Currently, Short-Term Holders (STH) are holding 16.2% of the coins in loss, while LTH are holding 28.5%. Coins are moving to new STH who aim to speculate on price but have less conviction about the asset, it added. 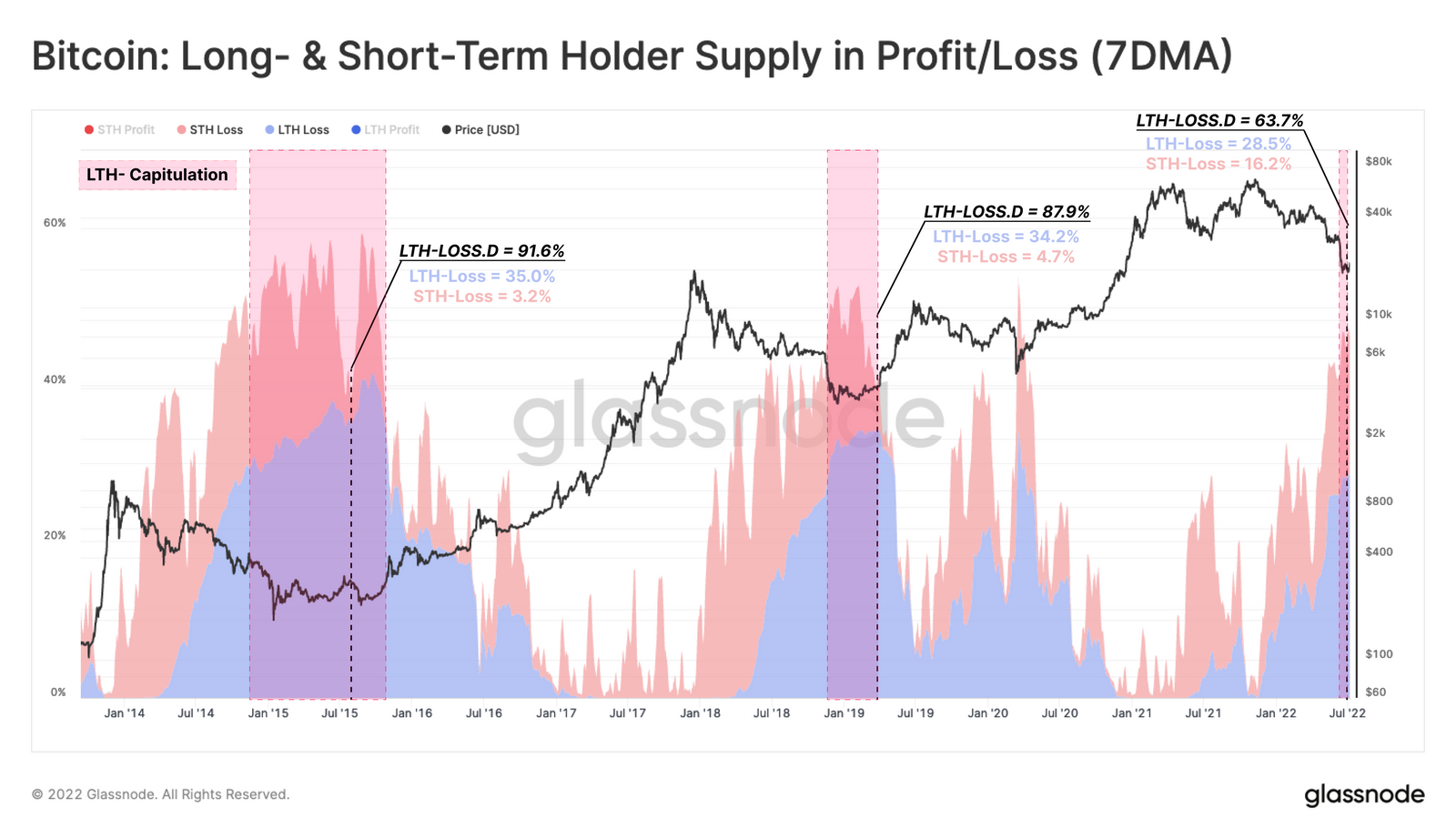 The proportion of LTH holding coins at a loss may still be too low.

This implies that as LTH scoop up more coins, they must have diamond hands, meaning they must not sell, for analysts to note a true market bottom. Cointelegraph echoed this idea acknowledging that Delphi Digital also believes that more time is required under current market conditions to call this the bottom.

Bitcoin miners selling coins is evidence that the market could be testing bottom ranges. Glassnode demonstrated that miners have sold 7,900 BTC since late May but have recently slowed spending to about 1,350 BTC per month.

Duration is again highlighted as a critical factor in determining where the market bottom could be. During the 2018-2019 bear market, miner capitulation took about four months to mark the bottom; they have only been selling in 2022 for about a month or two. Miners still hold about 66,900 BTC, so “the next quarter is likely to remain at risk of further distribution unless coin prices recover meaningfully,” the report concluded.

Overall, Glassnode noted that the market looks near the bottom, stating that it “has many hallmarks of the later stage of a bear market” but that investors should be aware that further pain could be in store.

“Overall, the fingerprint of a widespread capitulation and extreme financial stress is certainly in place.”