Bitcoin (BTC) visiting the $20,000 range after one and a half years made mining – the most important job of the ecosystem – a costly affair. However, if history were to repeat itself, BTC investors may witness another epic bull run that previously helped Bitcoin reach an all-time high of $69,000.

Changes in Bitcoin prices directly impact the miners’ income, who earn fixed block rewards and transaction fees in BTC for running their mining operations. In June 2022, the total mining revenue dipped below the $20 million range, with Blockchain.com data recording the lowest dip of $14.401 million on June 17. 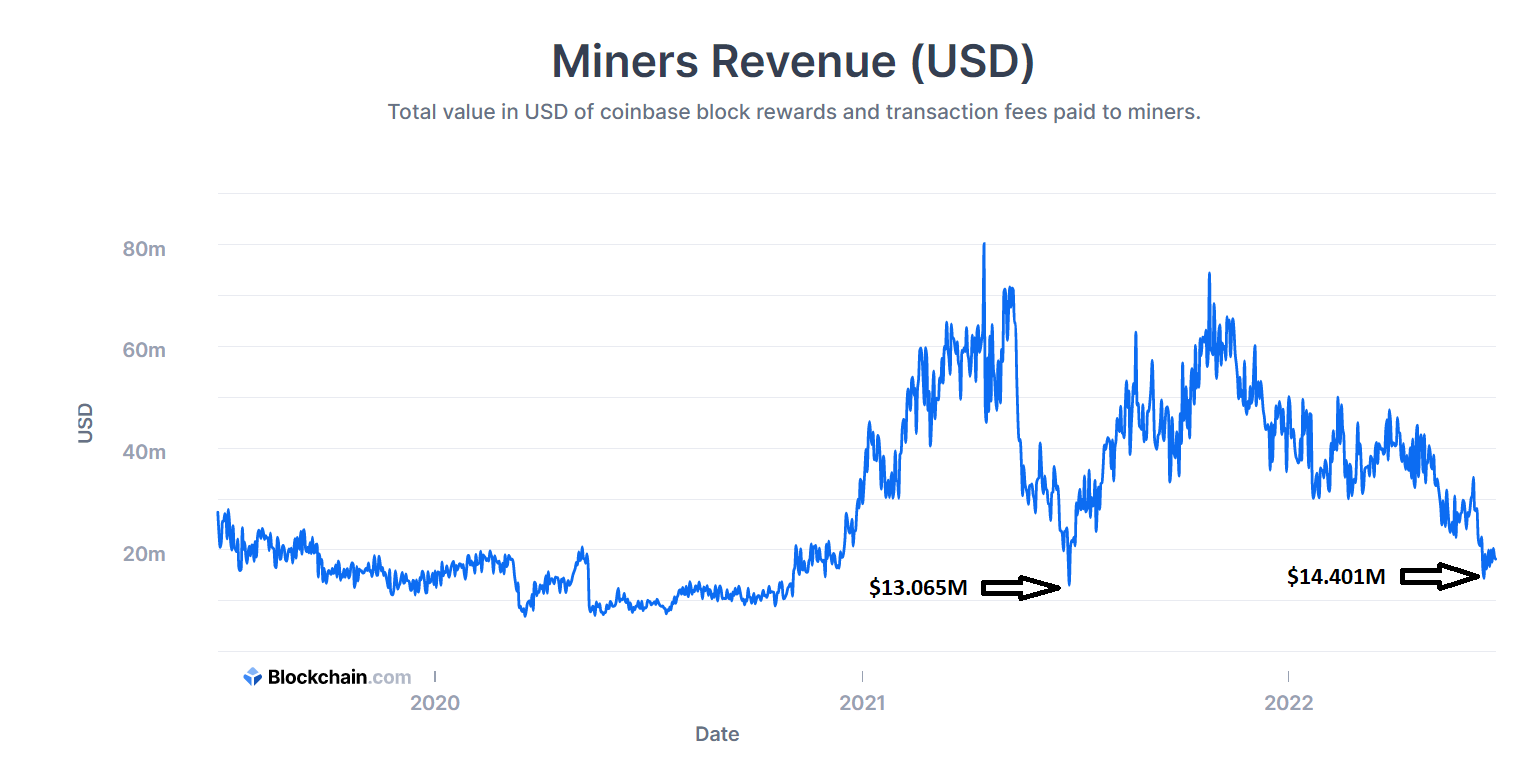 As shown above, the recent dip in Bitcoin mining revenue was last seen one year back when the total value tanked to $13.065 million on June 27, 2021 – back when BTC traded at roughly $34,000. What followed after that was Bitcoin’s 5-month-long epic bull run, which was supported by pro-crypto initiatives such as El Salvador’s BTC acceptance and crypto-friendly regulations across the globe.

Despite mixed sentiments about the recovery of the crypto ecosystem, small-time investors are found to have increased their investment efforts amid the bear market as they fulfill their long-term dream of owning one full BTC (1 BTC). Global recession, geopolitical tensions, falling crypto economies like Terra (LUNA) and an ongoing pandemic currently hold the Bitcoin ecosystem from unleashing its true potential.

A report shared by crypto-focused financial services firm Arcane Crypto revealed that potential of several public bitcoin miners to survive the ongoing bear market. The key to survival for Bitcoin miners boils down to the delicate balance between the revenue and the operating cash flow.

Based on the report, Argo, CleanSpark, Stronghold, Marathon and Roit are the best-positioned miners to sustain the crypto winter. At the same time, major player Core has nearly matched its operational costs to its total revenue.

Bitcoin mining hardware and hosting company Compass Mining lost one of its Maine-based hosting facilities after failing to pay the electricity bills.

Dynamics Mining, the owner of the mine hosting facility, alleged that Compass Mining has six late payments and three non-payments related to utility bills and hosting fees, stating “all you had to was pay $250,000 for 3 months of power consumption.”