The United States December nonfarm payrolls report showed a growth of 223,000 jobs, above the market’s expectation of an increase of 200,000 jobs. While this shows that the economy remains strong, market observers shifted their focus to the slower wage growth of 0.3% for the month, below economists’ expectation of 0.4%.

In addition, the euro zone’s headline inflation dropped from 10.1% in November to 9.2% in December. Both economic data boosted hopes that the central bank’s aggressive rate tightening may slow down. This triggered a rally in the U.S. and European stock markets. 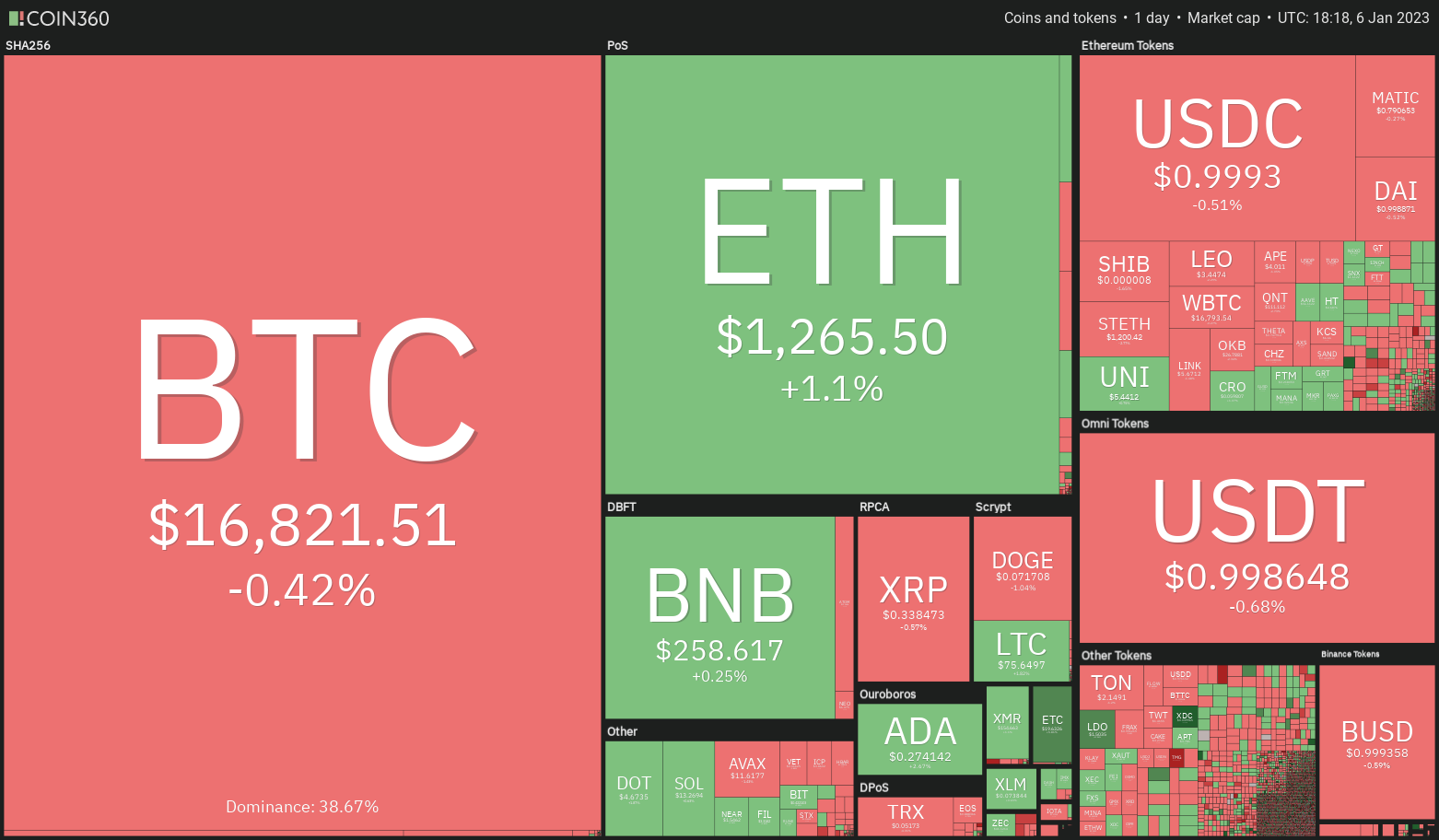 However, the reaction in the cryptocurrency space remains muted, with Bitcoin (BTC) continuing to trade inside a narrow range. The crypto investors may be taking a cautious approach due to rumors about Huobi’s insolvency, which the company’s representative said were untrue.

Several analysts believe that the extended period of low volatility in Bitcoin could be followed by an increase in volatility but John Bollinger, the creator of Bollinger Bands, thinks otherwise. Responding to a tweet by Wolf of All Streets podcast host Scott Melker, Bollinger said that “prolonged squeezes are rarely valuable signs.”

Are Bitcoin and altcoins showing signs of a breakout or will they remain stuck inside the range for some more time? Let’s study the charts of the top-10 cryptocurrencies to find out.

Bitcoin rose above the moving averages on Jan. 4 but the bulls could not clear the hurdle at $17,061. This shows that bears are fiercely defending the overhead resistance.

Although the price tumbled below the moving averages on Jan. 6, the long tail on the candlestick shows buying at lower levels. The bulls may make one more attempt to drive the price above $17,061.

On the other hand, if the price turns down from the current level or the overhead resistance, it will indicate that the pair may consolidate in the narrow range of $17,061 to $16,256 for a while longer.

Ether (ETH) has been range-bound between $1,150 and $1,352 for the past few days. The price action inside the range could be random and volatile.

The moving averages have flattened out but the RSI is in the positive territory, indicating that bulls have a slight edge. If the price turns up and breaks above $1,272, the ETH/USDT pair could rally to the overhead resistance at $1,352.

Another possibility is that the price turns down and dives back below the moving averages. In that case, the pair could decline to the immediate support at $1,150. This level could witness a tough battle between the bulls and the bears.

The bears are trying to halt BNB’s (BNB) relief rally at $261 but a minor positive in favor of the bulls is that they have not ceded ground to sellers.

The bears are likely to have other plans. They will try to sink the price back below $250. If that happens, the $236 support may come under attack. If this level also gives way, the pair could dive to the critical support at $220.

XRP (XRP) rose above the 20-day EMA ($0.35) on Jan. 4 but the bulls could not sustain the higher levels as seen from the long wick on the day’s candlestick.

The price turned down and slumped to the support line of the symmetrical triangle on Jan. 5. Both moving averages are sloping down and the RSI is in the negative zone, indicating that bears are in command.

If the price closes below the triangle, the XRP/USDT pair could start its downward journey toward the pivotal support at $0.30.

Alternatively, if the price turns up from the current level and climbs above the 20-day EMA, it will suggest strong buying near the support line. The pair could then reach the resistance line of the triangle.

Dogecoin’s (DOGE) rebound off the important support at $0.07 fizzled out at the 20-day EMA ($0.07) on Jan. 5. This suggests that bears are selling on every relief rally.

The price has dropped back to the $0.07 support where buyers are mounting a strong defense because if the level breaks down, the DOGE/USDT pair could tumble to $0.06 and thereafter to the vital support near $0.05. The downsloping moving averages and the RSI in the negative territory indicate that bears have the upper hand.

If bulls want to salvage the situation, they will have to propel the price above the resistance zone between the 20-day EMA and $0.08. That could start a sustained recovery toward $0.11.

Cardano (ADA) climbed and closed above the 20-day EMA ($0.26) on Jan. 4 which is the first indication that bulls are attempting a comeback. However, the bears are in no mood to surrender their advantage.

The long wick on the Jan. 6 candlestick shows that higher levels are attracting sellers. The bears will try to pull the price back below the 20-day EMA and yank the ADA/USDT pair toward the crucial support near $0.24.

On the contrary, the bulls will try to protect the 20-day EMA. If the price turns up from the current level, the pair could rally to the 50-day SMA ($0.29). This level could again witness strong selling by the bears.

The bears will now try to sink the price below the immediate support of $0.75. If they manage to do that, the MATIC/USDT pair could drop to the support of the range at $0.69. Buyers are likely to defend this level with all their might because a break below it could start a new downward move.

If bulls want to invalidate the negative view, they will have to quickly push and sustain the price above the moving averages. The pair could then rise toward $0.97.

Polkadot’s (DOT) recovery has stalled near the 20-day EMA ($4.59) but a minor positive is that the bulls did not give up much ground. This indicates that buyers expect a move higher, hence they are not closing their positions in a hurry.

If the price ascends above $4.68, the DOT/USDT pair could attempt a rally to the 50-day SMA ($4.98). This level may again act as a barrier but if bulls overcome it, the pair could surge to the downtrend line.

Instead, if the price turns down and slides below $4.50, it will suggest that bears continue to defend the zone between the moving averages. The pair could then again drop toward the vital support at $4.22.

Litecoin (LTC) turned down from the minor resistance at $78 on Jan. 4 but rebounded off the moving averages on Jan. 6. This suggests that bulls are viewing the dips as a buying opportunity.

The upsloping moving averages and the RSI in the positive territory indicate the path of least resistance is to the upside. If bulls thrust the price above the resistance at $78, the LTC/USDT pair could soar to $85.

On the other hand, if the price turns down from the current level or the overhead resistance, it will suggest that bears are selling on rallies. A break and close below the moving averages could tilt the advantage in favor of the bears. The pair could then slide to the next support at $65.

Uniswap’s (UNI) recovery hit a roadblock at the 50-day SMA ($5.56) on Jan. 4. This may have tempted short-term traders to book profits, which pulled the price to the support line of the triangle on Jan. 6.

The bulls purchased the dip and pushed the price back above the 20-day EMA ($5.36). This indicates that the bulls are aggressively guarding the support line. Buyers will again try to overcome the obstacle at the 50-day SMA. If they can pull it off, the UNI/USDT pair could start its march toward the resistance line.

The bears will have to sink and sustain the price below the support line to gain the upper hand. The pair could then decline to the $4.94 to $4.71 support zone.

A former product manager at cryptocurrency exchange Coinbase has moved to dismiss charges of alleged insider trading, with his lawyers arguing the tokens he allegedly...
Lees meer
Crypto news English

North Korea stole more crypto in 2022 than any other year: UN report

A confidential United Nations report has revealed North Korean hackers stole more crypto assets in 2022 than in any other year so far. The UN report,...
Lees meer
Crypto news English

The Bank of England (BoE) and U.K. Treasury are gearing up plans to create a digital currency that could "provide a new way to pay"...
Lees meer
Crypto news English

The creator of the nonfungible token (NFT) collection Bored Ape Yacht Club has settled a lawsuit with one of the developers behind a copycat collection...
Lees meer
Laad meer