Bitcoin mining in a university dorm: A cooler BTC story

The humble university dorm is a place for students taking their undergraduate degrees to study, rest, make new friends, host wild dorm parties and, of course, mine Bitcoin (BTC).

A master’s student in market research and self-described “data guy,” Blake Kaufman, has hooked up an S9 Bitcoin miner to the Bitcoin network.

He won the S9 miner in a raffle at a mid-Michigan Bitcoin meetup and immediately set about learning how to use it.

Blake has consistently shown up to every https://t.co/2Q6OuIwW4O event with at least one friend, a tremendous attitude, and unmatched enthusiasm.

Glad you won the S9 raffle!

Hash away at those KYC free sats, and enjoy the heat this winter! https://t.co/AQNzDjnDGC

During a video call with Cointelegraph, Blake joked that he knew next to nothing about mining prior to the raffle. The moment he won, he raced to the nearest place offering a power cable and an ethernet connection to try it out, his dad’s office.

“We turned it on, never hearing one [an S9] before. And if you know, when they start, they immediately rev up to 100% and we’re all just in the room like – oh my gosh – this thing is loud! We ran it for probably two hours and we walked into that office and it was hot.”

The hot and noisy realization kicked his brain into gear. The Michigan winter was fast approaching and his university provides free electricity. Why not mine Bitcoin from a dorm and take advantage of the waste heat? There was one minor but audible hurdle to overcome. “How can we fix the noise,” he questioned.

“I just looked up online, like, how to noise cancel S9, and this picture of a cooler on Pinterest popped up. Me and my Dad were like, ‘Let’s build it. Why not?’ So we bought a $5 cooler on Facebook Marketplace and we had the tubes in our attic and we spent about two hours drilling holes and it ended up working.”

The pair constructed the Bitcoin mining cooler box, which now takes up residence in Blake’s dorm. The finished product would not look out of place in any dorm room and is “actually quieter than an air conditioning unit,” he explains. 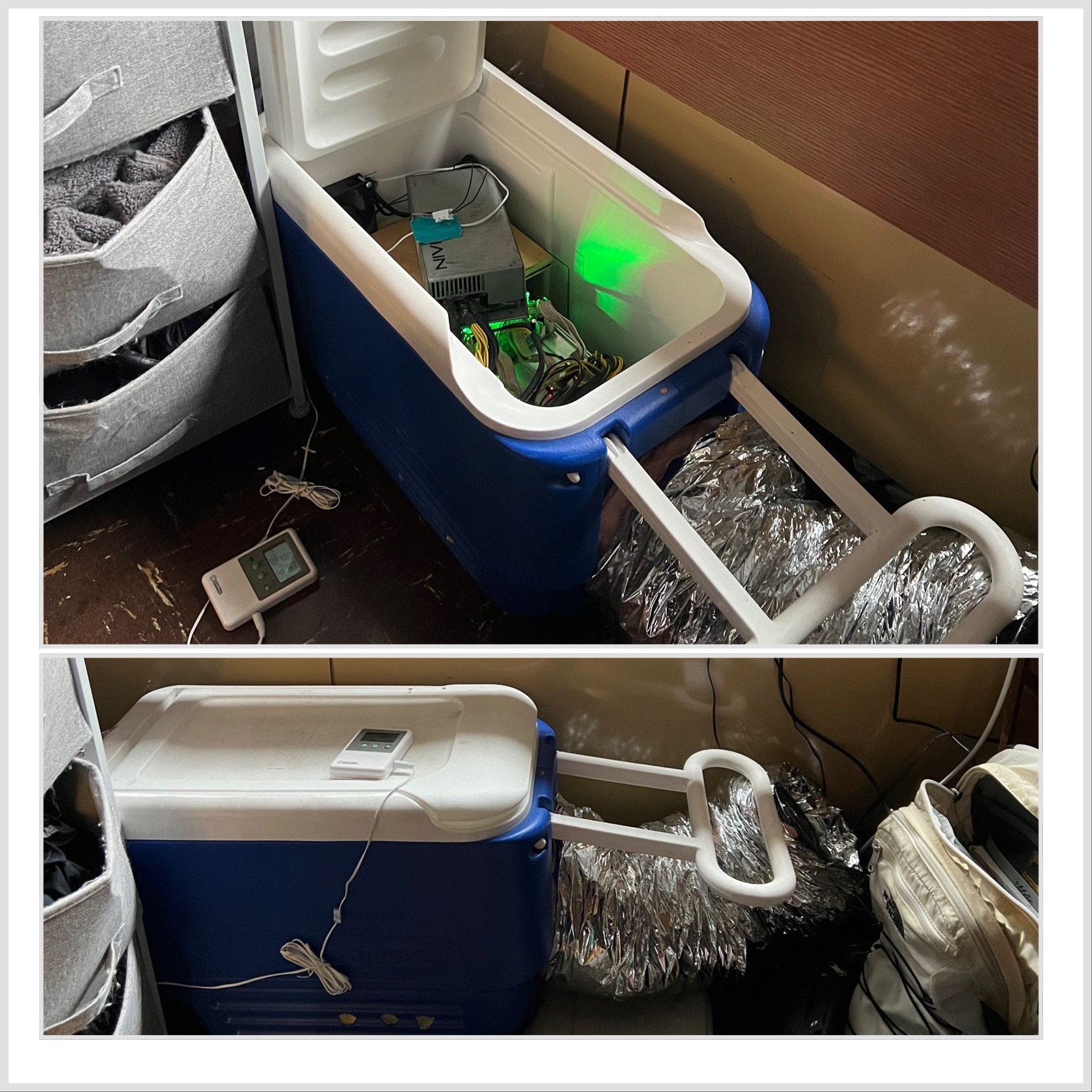 But aren’t there rules against this sort of thing at university? Won’t the energy-hungry Bitcoin miner put a dent in the university’s electricity overhead?

“So the miner is about 900 watts an hour, a mini fridge is about 60 to 100 watts a day. So it’s pulling a decent amount of electricity there. I looked up all the rules and it didn’t say anywhere you couldn’t mine a Bitcoin or use a Bitcoin miner. So if they say you can’t do this, I’d be like, okay, you didn’t say I couldn’t.”

In a nutshell, Blake’s not breaking any rules. What’s more, one miner in one dorm in a large university home to thousands of students is unlikely to raise suspicion. It’s an ode to the famous saying attributed to Rear Admiral Grace Hopper that sometimes, “It is better to ask for forgiveness than permission.”

The ASIC S9 now whirrs away, generating roughly 0.000001 BTC or 100 satoshis –  the smallest amount of a Bitcoin – per Bitcoin block, which occurs on average every 10 minutes. It translates to “about a dollar a day” in fiat-money terms. It’s a paltry amount but not to be sniffed at as a student.

Blake’s total outlay to start his Bitcoin mining venture was a coolbox and a few cables at less than $20 and he can probably reuse the cooler come summertime.

Incidentally, Blake’s next challenge is to work out what to do when the weather improves and the mercury rises. Peak summer days in Michigan can hit 95 degrees Fahrenheit (35 Celsius). As a result, the outside air temperature will not cool the miner, a vital part of its operation:

“So I’ll have to figure out something, maybe put it in a box of ice cubes and then something like that. I don’t know yet.”

Blake has already considered using the Bitcoin miner to heat his family home after graduation. The idea, Blake explains, is to experiment with whether he can offset the gas cost at home and make it profitable. “It’s just unfortunate because, in Michigan, our electricity cost is $0.14 a kilowatt hour.”

Michigan’s energy costs are relatively high in the United States, as shown by a darker purple color. Source: Chooseenergy.com

Electricity and heating costs are higher in Michigan than in energy-producing states like Texas. Using the waste heat from Bitcoin mining could be a way of offsetting the energy costs.

“Chicken shack” miners are the backbone of the Bitcoin network hash rate. It’s incredible to see all the different ways they come up with to mine. They provide an invaluable service in keeping hash rate decentralized.”

Armed with oodles of Bitcoin knowledge, Blake has since tried to orange pill his classmates and even professors. Unfortunately, some of them hold the belief that “Bitcoin is a scam.” He has taken it upon himself to set the record straight:

“I’m emailing those teachers being like, Hey, office hours, when are they? Let’s have a chat. You can’t just come out and say Bitcoin is a scam with a Bitcoiner in the room.”

In the meantime, the S9 is whirring away in his dorm room, contributing to a network Blake strongly supports and generating 100% “free money.”

The creator of the nonfungible token (NFT) collection Bored Ape Yacht Club has settled a lawsuit with one of the developers behind a copycat collection...
Lees meer
Crypto news English

Sam Bankman-Fried's (SBF's) lawyers have reached an agreement with federal prosecutors concerning his use of messaging apps. According to a Feb. 6 court document, both parties...
Lees meer
Laad meer