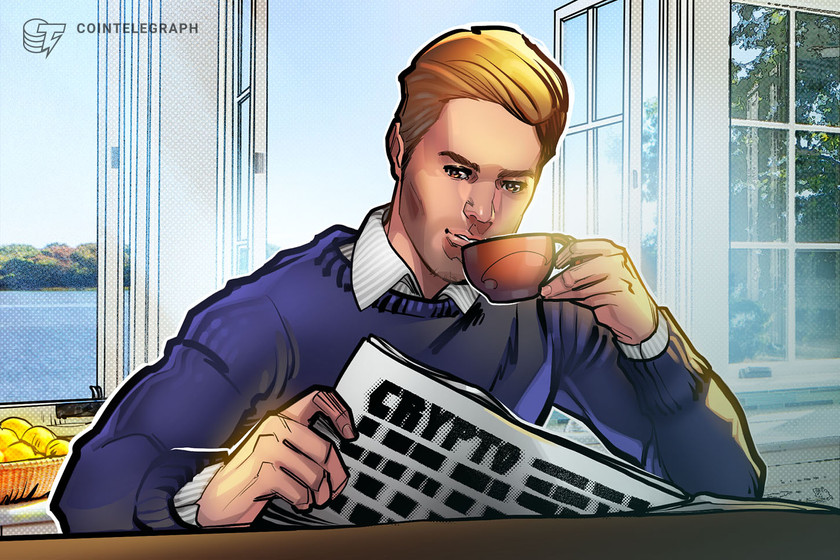 An AWS outage sent shockwaves around the crypto industry, Delong left his role as Sushi CTO, and Coinbase opened a cryptography library — all coming to you in this week’s Finance Redefined.

Welcome to the latest edition of Cointelegraph’s decentralized finance newsletter.

Although the markets may be down and technical indicators built upon AWS malfunctioning, fear not young degens, fundamental news and the spirit of Wagmi is abundant as ever. So, read on and discover all you need to know about the most important events of this week.

What you’re about to read is a shorter, more succinct version of the newsletter. For a comprehensive summary of DeFi’s developments over the last week, subscribe below.

AWS is the world’s largest cloud service infrastructure, which provides an array of services, including network servers, storage capacities, remote computing and mobile development, to name a few.

According to data published this year by Synergy Research Group, the tech titan holds a 33% share of the cloud infrastructure market, followed by Microsoft and Google with 20% and 10%, respectively.

Details on the incident were largely undisclosed; however, it was stated on the company’s service health page that “multiple AWS APIs in the US-EAST-1 Region,” located in Northern Virginia, were experiencing connectivity issues.

In a Twitter statement shared on Dec. 7, and into the early hours of Dec. 8, dYdX spoke about enhanced latency across the network, as well as website loading failures, before disclosing its overreliance on the centralized servers, one of which is AWS.

Unfortunately, there are still some parts of the exchange that rely on centralized services (AWS in this case). We are deeply committed to fully decentralizing and this remains one of our top priorities as we continue to iterate on the protocol. We apologize for this outage.

Analytical data from DappRadar reveals that dYdX is the 13th largest decentralized finance application built on the Ethereum Network, registering approximately $1.5 billion in daily trading volume. In September this year, dYdX achieved a historic transactional milestone in surpassing the volume of Coinbase over the course of a single day, with $4.3 billion in comparison to $3.7 billion.

Decentralization is understood by many early crypto adopters to be a core component of the industry’s architecture. Alongside security and scalability, the former makes up the so-called blockchain trilemma, a concept coined by Ethereum co-founder Vitalik Buterin, to denote the necessity to sacrifice one side of the triad to experience the benefits of the other two.

In the world of crypto exchanges, many opt to prioritize security and scalability in pursuit of mass adoption but, therefore, operate with largely centralized, Web 2.0-like structures.

SushiSwap chief technology officer Joseph Delong, announced his immediate departure from the decentralized exchange this week, pledging to honorably pass the proverbial batten onto the next leader, alongside necessary accounting and information data.

Delong explained the reasoning behind his decision in a candid Twitter thread, citing internal conflicts and a lack of unified vision for the project, stating:

​​“I wish Sushi the best and am saddened that Sushi is so imperiled within and without. The chaos that is occurring now is unlikely to result in a resolution that will leave the DAO as much more of a shadow than it once was without a radical structural transformation.”

Delong has experience working in the Web 3.0 space as a blockchain engineer and developer. Formerly employed as a senior software engineer at ConsenSys, Delong took up the position of CTO at SushiSwap at the beginning of 2021 following Chef Nomi’s infamous exodus in the months prior.

Over the past year, Delong has guided SushiSwap to the 12th ranked position in nominal total value locked value (TVL) with $2.85 billion but also suffered obstacles with stringent whitelisting acceptance on layer-two protocol Optimism, as well as a $3-million supply chain exploit on launchpad MISO and, more recently, rumoured vulnerability in its smart contracts to the value of $1 billion.

One of the leading cryptocurrency exchanges, Coinbase, this week announced the launch of an open-source library-themed platform, titled Kryptology, designed to provide developers with a suite of “secure, audited, and easy-to-use application programme interfaces (APIs).”

In an official blog post, Coinbase outlined its intentions for the library in fostering the continued development of this long-standing technology:

“While enabling further innovation is our primary goal, we also aim for Kryptology to elevate the standard for what is considered to be a robust, usable cryptographic library.”

Analytical data reveals that DeFi’s total value locked has decreased 11.3% across the week to a figure of $143.95 billion.

Terra (LUNA) was the sole gainer of the top 100 this week with a mere 1.81%. Not the most memorable technical week for DeFi, let’s put it that way, but unsurprising considering the wider context of the crypto-wide market pullback.

Interviews, features and other cool stuff

Thanks for reading our summary of this week’s most impactful DeFi developments. Join us again next Friday for more stories, insights and education in this dynamically advancing space.

Arbitrum’s TVL surges to $1.5B as DeFi degens ape into ArbiNYAN