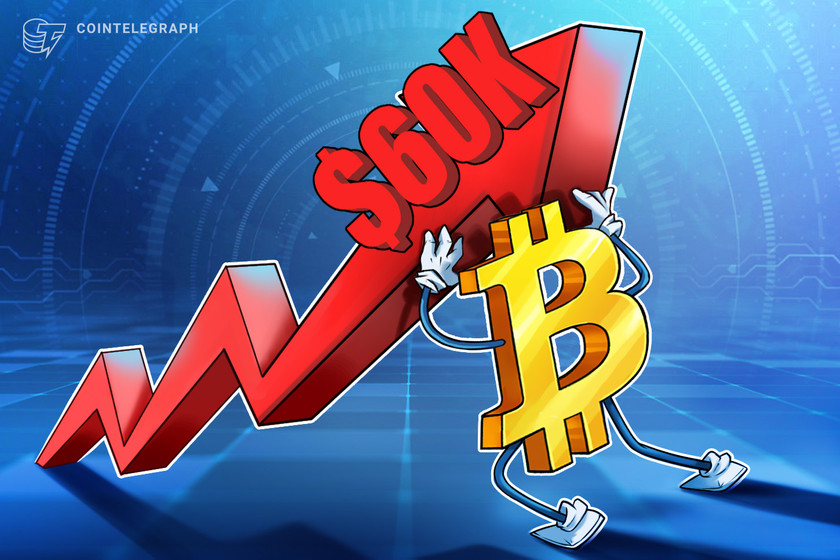 Bitcoin (BTC) chopped and changed on Nov. 18 but held a critical support level to preserve the chance of new all-time highs.

Data from Cointelegraph Markets Pro and TradingView followed BTC/USD as it ranged between $59,000 and $60,000 Thursday, seeing $1,000 swings in minutes.

“Based on the Futures Markt structure, the funding rate and OI momentum trends are forming a perfect setting for a ‘Short-Squeeze’ scenario,” one contributor to on-chain analytics firm CryptoQuant argued Wednesday.

“Then the question is, what price range would act as a support level?”

A similar event occurred at the end of September when Bitcoin suddenly surged into a week of almost unchecked gains which topped out at $55,000.

For popular trader Crypto Ed, the chances were there that the $58,400 lows of recent days may be a more definitive floor.

“Maybe a bit early to post as the bottom might not be in yet, but I’m getting excited when checking next targets which don’t seem to be that far away!” he ventured Wednesday.

This week, PlanB reiterated the difference between that prediction and his stock-to-flow Bitcoin price models, with a failure to hit it leaving the latter intact.

To clarify: 98K Nov prediction is NOT based on S2F model but on my floor model.
As I said before (in tweets and latest podcasts), I use 3 models:
1) S2F
2) Floor model
3) On-chain model
If for example 98K Nov floor model prediction fails, that does NOT mean S2F or on-chain fails. https://t.co/tj6SSwSzKR

For the short term, however, some considered the market still unprepared to support a fresh BTC price run-up.

Highlighting a lack of “fear” in sentiment, trader and analyst Rekt Capital was sober on the likelihood of a full-on trend reversal.

“Doesn’t seem that BTC investors are fearful enough towards price for this retrace to be over just yet,” he warned.

“It is Extreme Fear that precedes maximum financial opportunity, not neutrality.”