XRP addresses that hold at least 10 million native units have returned to accumulating more in the past three months, a similar scenario that preceded a big rally for the XRP/USD and XRP/BTC pairs in late 2020.

The return of XRP ‘mega whales’

A 76% spike in XRP “mega whale” addresses since December 2021 has been noted by analytics firm Santiment showing that they added a total of 897 million tokens, worth over $712 million today, to their reserves.

The platform further highlighted that the XRP accumulation witnessed in the last three months was the second-largest in the coin’s existence. The first massive accumulation took place in November-December 2020 that saw whales depositing a total of 1.29 billion XRP to their addresses. 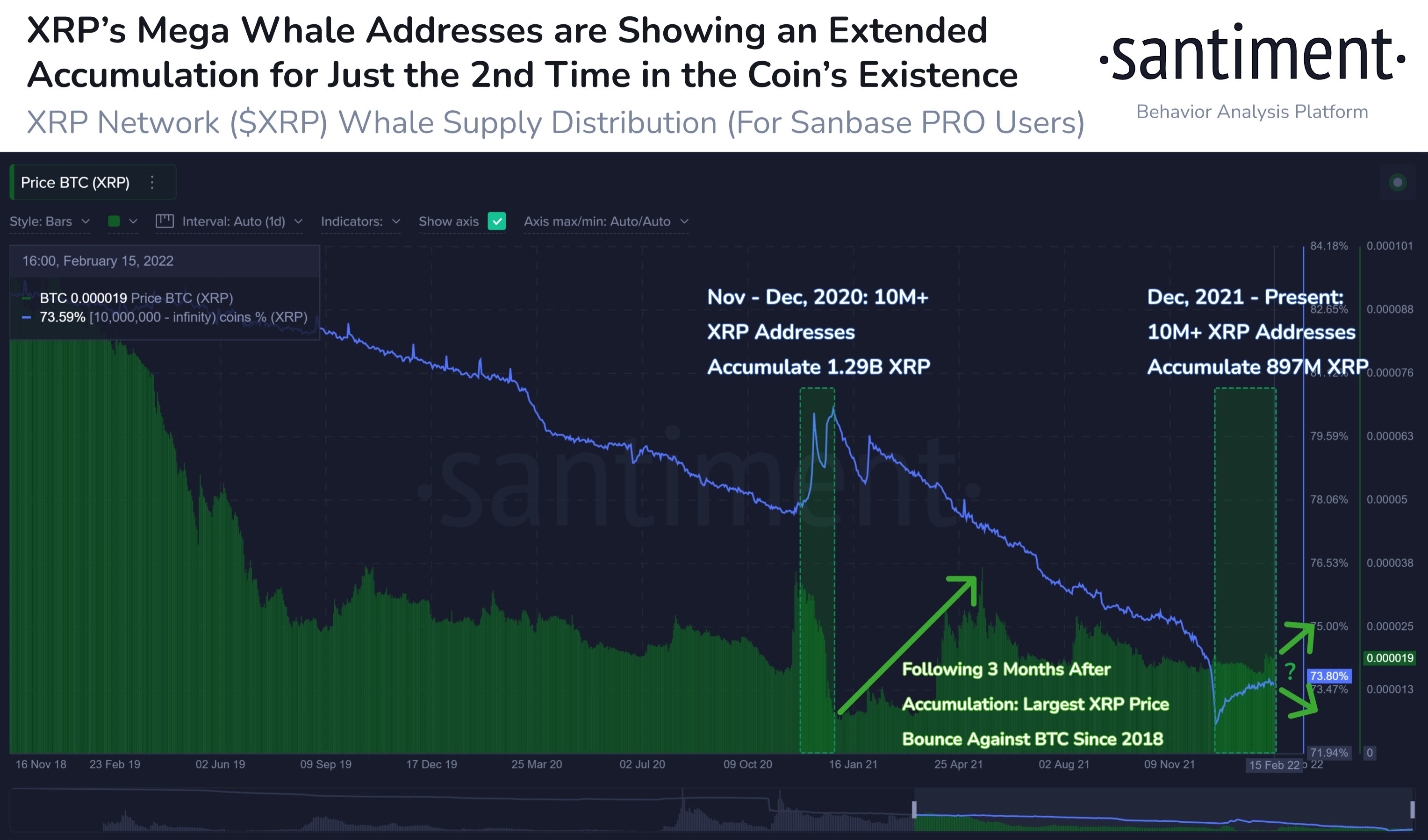 Interestingly. the spike in XRP supply into the whale addresses coincided with a price bounce against Bitcoin. The XRP/BTC exchange rate surged by nearly 150% to as high as 3,502 satoshis between Nov. 1, 2020, and Nov. 24, 2020.

XRP also strengthened against the dollar as with XRP/USD rallies by more than 250% to $0.82 in the same November period. As a result, the recent uptick in whales-led accumulation raised possibilities of a similar upside trend in the XRP market, Santiment hinted.

Nonetheless, it is vital to mention that XRP’s massive boom in November 2020 came primarily in the wake of Ripple’s move to purchase $46 million worth of XRP to “support healthy markets.”

The recent bout of XRP accumulation among whales partially appeared alongside a recovery over the past weeks.

Cointelegraph discussed a similar pullback setup in its analysis last week, suggesting that a selloff near the 50-week EMA could trigger an extended downside move toward the 200-week EMA (the blue wave) near $0.54.

Conversely, the setup also indicated that a decisive move above 50-day EMA might push the price to its multi-month descending trendline resistance near $1.

The price action on shorter-timeframe charts also suggests an imminent rally toward $1. For instance, XRP has been forming what appears to be a bull pennant setup on a four-hour chart, confirmed by an ongoing consolidation in a symmetrical triangle.

A basic rule of the bull pennant setup is that it prompts the price to go higher once it decisively breaks above the structure’s upper trendline, and thus eyeing levels above $1.

Bitcoin (BTC) needs to hold current levels and work to reclaim higher ones to avoid a crash in the $20,000 range, the latest analysis warns.  BTC/USD...
Lees meer
Crypto news English

The Brazilian Stock Exchange will launch Bitcoin and Ethereum futures

B3, the Brazilian Stock Exchange, confirmed that within six months it intends to launch its first official product aimed at the cryptocurrency market - Bitcoin...
Lees meer
Crypto news English

Digital euro could come as soon as 2026 — ECB official

Fabio Panetta, an executive board member of the European Central Bank, or ECB, has said that a digital euro could come within four years, potentially...
Lees meer
Laad meer