Bitcoin (BTC) plummeted to $17,622 on June 18. This marked the first time in Bitcoin’s history that it has fallen below its previous cycle high. The United States Federal Reserve’s aggressive monetary tightening, a crisis at crypto lending platform Celsius and liquidity issues at investment fund Three Arrows Capital are creating a sense of panic among traders.

Markets commentator Holger Zschaepitz said that Bitcoin has crashed more than 80% four times in history. That puts the current fall of about 74% within historical standards. Previous bear markets have bottomed out just below the 200-week moving average, according to market analyst Rekt Capital. If history repeats itself, Bitcoin is unlikely to stay at the current depressed levels for a long time. 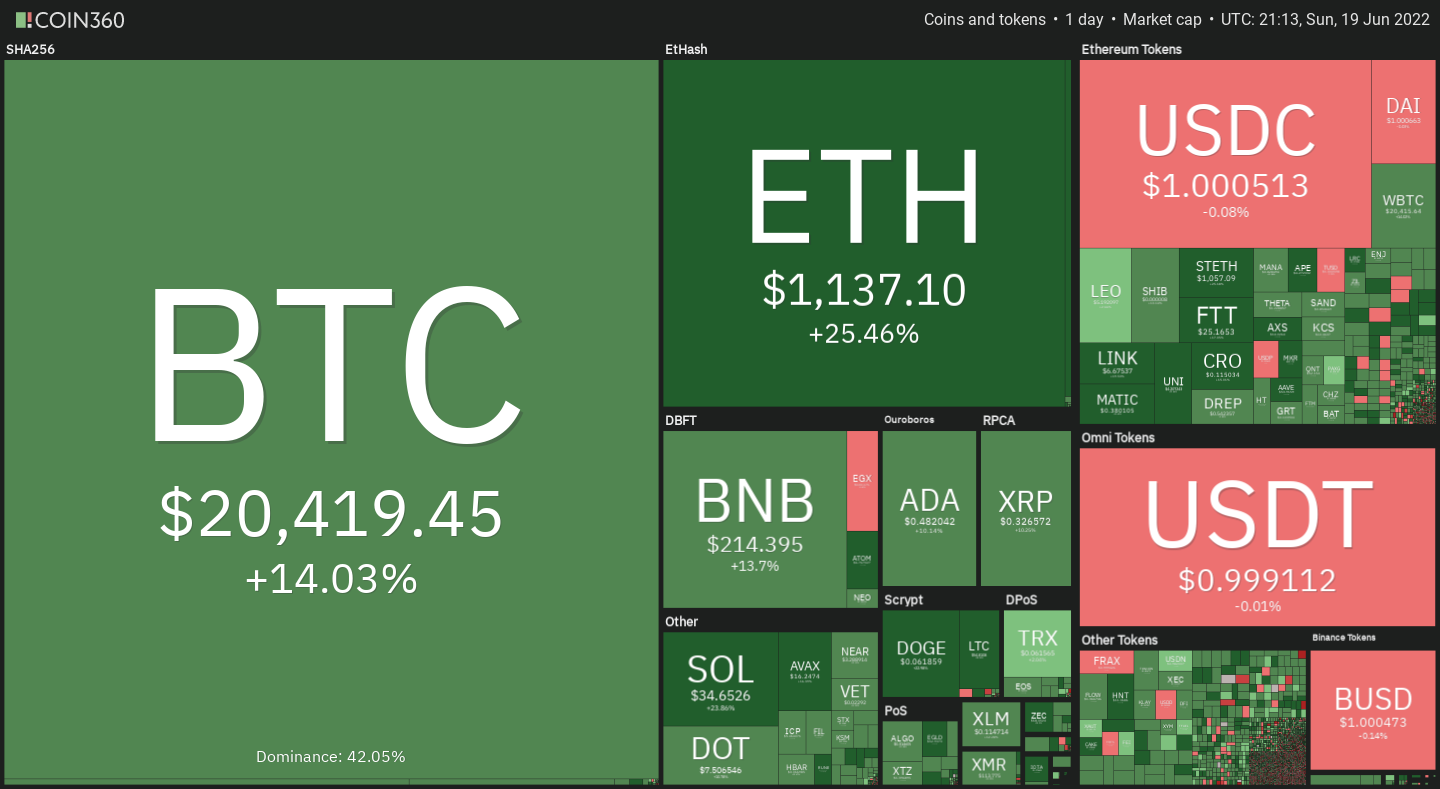 Coinglass data suggests that Bitcoin’s 39% loss in June of this year is the worst ever since 2013. While several investors expect Bitcoin to bottom out soon, crypto critic Peter Schiff warned that the selling could continue and the largest cryptocurrency may drop to $3,000.

Could bulls arrest the decline in Bitcoin in the short term? If that happens, let’s study the charts of the top-5 cryptocurrencies that may outperform the other coins.

Bitcoin plummeted below the crucial support of $20,111 on June 18, indicating the resumption of the downtrend. A minor positive is that the bulls purchased the dip as seen from the long tail on the day’s candlestick.

The buyers are attempting to push the price back above the breakdown level of $20,111. If they manage to do that, it will suggest that the drop to $17,622 on June 18 may have been a bear trap. The BTC/USDT pair could then rally to $23,362 where the bears may again mount a strong resistance.

The relative strength index (RSI) has been trading in the oversold zone for the past few days which suggests a relief rally in the near term.

This positive view could invalidate if the price turns down from $20,111. That will suggest the bears have flipped the level into resistance and increase the possibility of a break below $17,622. The next support on the downside is $16,000.

The positive divergence on the RSI suggests that the bears may be losing their grip. The 4-hour chart shows that the price has recovered to the 20-exponential moving average.

This is an important level for the bears to watch out for because a break and close above it could push the pair to the overhead resistance zone between the 50-simple moving average and $23,362.

Conversely, if the price fails to sustain above the 20-EMA, it will suggest that bears are active at higher levels. The sellers will then again try to pull the pair to $17,622.

Solana (SOL) has been in a strong downtrend but the positive divergence on the RSI suggests that the bearish momentum could be weakening.

The bulls will try to push the price above the 20-day EMA ($36). If they succeed, it will suggest that the bulls are on a comeback. The SOL/USDT pair could thereafter rise to the 50-day SMA ($50) where the bears may again mount a strong defense.

On the contrary, if the price turns down from the 20-day EMA, it will suggest that the bears are in no mood to surrender their advantage. The sellers will then again try to sink the price below $25 and start the next leg of the downtrend.

The bulls have pushed the price above the moving averages on the 4-hour chart and will attempt to clear the overhead hurdle at the downtrend line. If they do that, it will suggest that the downtrend may have ended in the short term. The buyers will then try to push the price to $42.50 and later to $45.

Conversely, if the price turns down from the current level or the downtrend line and breaks below the moving averages, it will suggest that bears continue to defend the overhead resistance aggressively. That could pull the price to $27.50 and later to $25.

The bears attempted to sink Litecoin (LTC) below the strong support at $40 on June 18 but the long tail on the day’s candlestick suggests that the bulls are defending the level aggressively.

The relief rally has reached the 20-day EMA ($55) which is an important level to keep an eye on because a break and close above it could suggest a potential change in trend. The LTC/USDT pair could thereafter rise to the 50-day SMA ($68).

Contrary to this assumption, if the price turns down from the 20-day EMA, it will suggest that the trend remains negative and traders are selling on rallies. The bears will then make another attempt to sink the pair below $40 and resume the downtrend.

The price has broken out of a symmetrical triangle pattern on the 4-hour chart. Although this setup usually acts as a continuation pattern, sometimes it indicates a possible reversal. The moving averages have completed a bullish crossover, suggesting advantage to buyers. If buyers sustain the price above the triangle, the pair could rise to the pattern target of $62.

This positive view could invalidate in the short term if the price turns down and re-enters the triangle. Such a move will suggest that the break above the triangle may have been a bull trap.

Chainlink (LINK) is in a downtrend but it is trying to form a bottom near $5.50. The bears pulled the price below this level on June 13, June 14 and June 18 but they could not sustain the lower levels. This suggests that bulls are buying on dips.

The positive divergence on the RSI suggests that the bearish momentum may be weakening. The buyers will try to push the price toward the downtrend line, which is likely to act as a stiff resistance.

If the price turns down from the downtrend line, the bears will again attempt to sink and sustain the LINK/USDT pair below the $5.50 support. If that happens, it will suggest the resumption of the downtrend.

Alternatively, if buyers thrust the price above the downtrend line, it will suggest a potential trend change. The pair could then rise to $10 and later to $12.

The rebound in the pair has reached the 50-SMA which may act as a minor resistance. The 20-EMA is flattening out and the RSI is near the midpoint, suggesting that the bears may be losing their grip.

If buyers push the price above the 50-SMA, the pair could rise to $7.51. A break and close above this resistance will complete a double bottom pattern in the short term. This reversal setup has a pattern target of $9.50.

To invalidate this bullish view, the bears will have to pull and sustain the price below the strong support at $5.50.

Bitcoin SV (BSV) has formed a broadening pattern and the buyers are attempting to push the price above the resistance of the setup. The RSI is showing a positive divergence, indicating that the bearish momentum is weakening.

The BSV/USD pair could rally to the resistance line where the bears may try to stall the recovery. If that happens, it will suggest that bears continue to sell on rallies. That could keep the pair stuck inside the broadening formation for some more time.

Conversely, if bulls drive the price above the resistance line, it will suggest that the pair may have bottomed out. The pair could then start a new up-move which could push the pair to $80 and then $87. 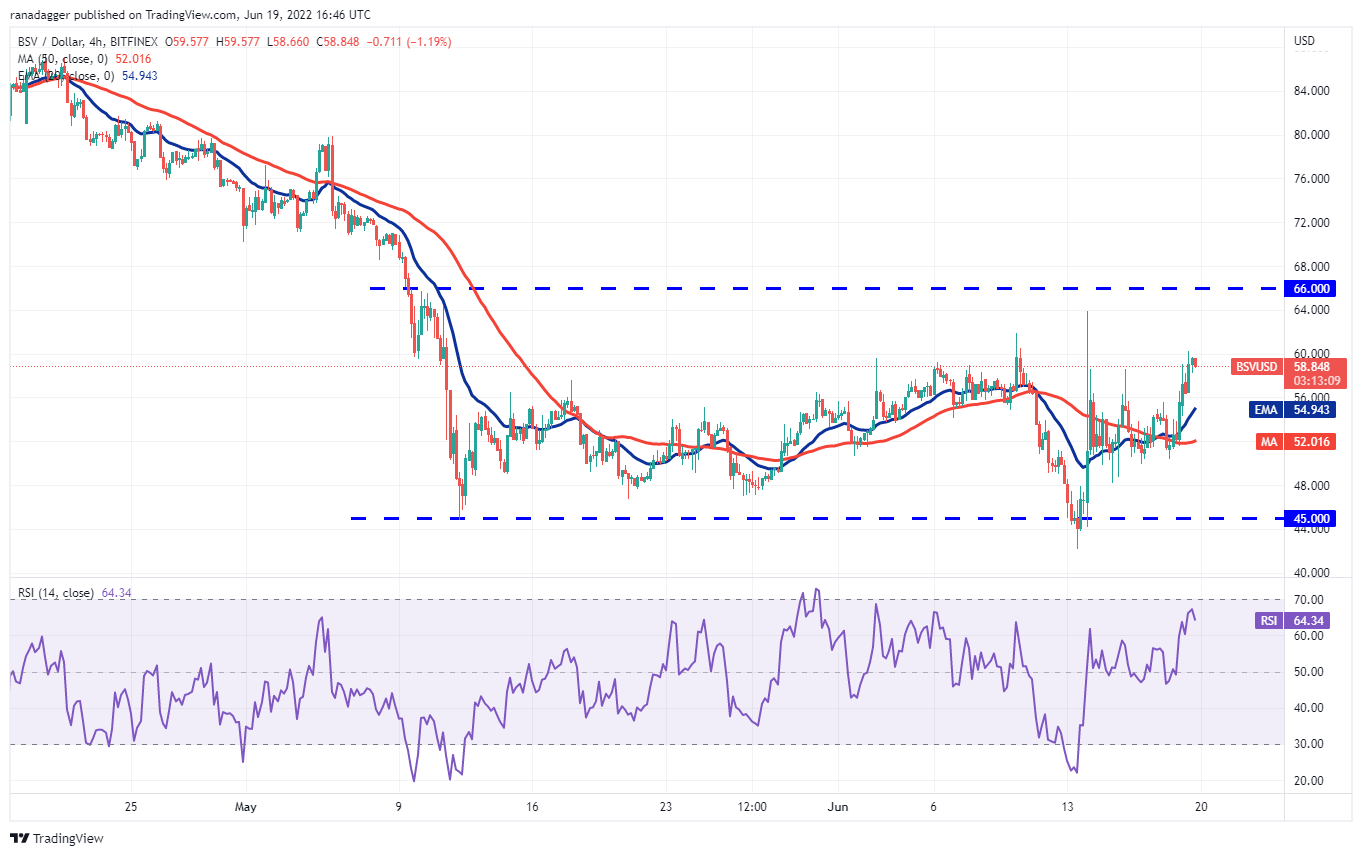 The 4-hour chart shows that the pair has been trading inside a large range between $45 and $66. After a failed attempt by the bears to pull the pair below the range, the bulls will attempt to push the price above the resistance.

If they succeed, the pair could start a new up-move. The pattern target of this setup is $87. Another possibility is that the price turns down from $66. If that happens, it will suggest that the pair may remain range-bound for some more time.

Members of the crypto community on Twitter have been left bewildered by the beleaguered Celsius Network continuing to pay weekly rewards despite pausing withdrawals two...
Lees meer
Crypto news English

Securities and Exchange Commission Chairman Gary Gensler riled up Crypto Twitter on Monday after affirming that Bitcoin (BTC) is a commodity. Questions were raised about...
Lees meer
Crypto news English

The funds from Harmony's Horizon Bridge have begun to move into the Tornado Cash Ethererum mixer, signaling that the attacker has no intention of accepting...
Lees meer
Laad meer