The bulls are attempting to achieve a strong weekly close for Bitcoin (BTC), while the bears are attempting to regain their advantage. Analysts are closely watching the 200-week moving average which is at $22,705 and BTC’s current setup suggests that a decisive move is imminent.

Many analysts expect a weekly close above the 200-week MA to attract further buying but a break below it could signal that bears are back in the game. Although the short-term picture looks uncertain, analyst Caleb Franzen said that Bitcoin has been in an accumulation zone since May. 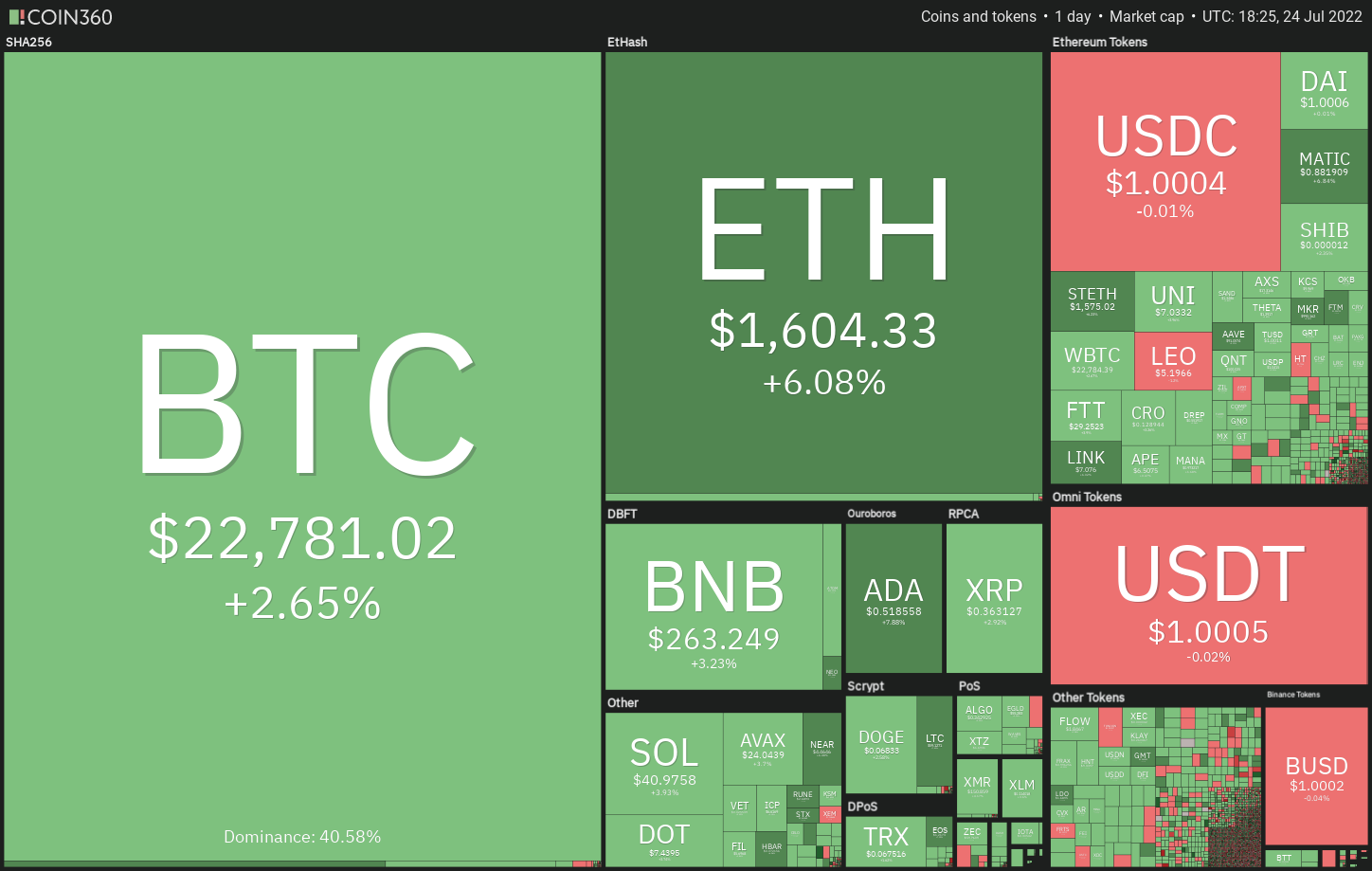 Meanwhile, on-chain analytics firm CryptoQuant highlighted increasing outflows of Ether (ETH) from major exchanges, totaling $1.87 million coins on July 22. Usually, outflows from crypto exchanges suggest that traders are bullish for the long-term hence they may be moving their coins to safety.

Could Bitcoin resume its recovery, attracting buying in select altcoins? Let’s study the charts of the top-5 cryptocurrencies that look strong on the charts.

The bears tried to sink Bitcoin back into the symmetrical triangle on July 23 but the bulls had other plans. The rebound off the breakout level from the triangle indicates that buyers are defending the level aggressively.

Conversely, if the price slips below the 20-day EMA, the pair could decline to the next support at $20,500.

The pair has formed a falling wedge pattern on the 4-hour chart. If buyers drive the price above the wedge, the pair could retest $24,276. A break and close above this level could signal the resumption of the uptrend.

The 20-EMA is flat and the RSI is near the midpoint, indicating a balance between supply and demand. If the price turns down and breaks below the 50-SMA, the pair could drop to the support line of the wedge.

Ether is facing stiff resistance at $1,700 but a positive sign is that buyers have not given up much ground. A tight consolidation near the overhead resistance increases the likelihood of a break above it.

The upsloping 20-day EMA ($1,384) and the RSI in the positive territory indicate that bulls have the upper hand. If buyers drive the price above $1,700, the bullish momentum could pick up and the ETH/USDT pair could rise to $2,000 followed by a rally to $2,200.

The pair bounced off the 50-SMA, indicating that bulls are buying on dips. The buyers will attempt to push the price to the overhead resistance at $1,700. Both moving averages are sloping up and the RSI is in the positive territory, suggesting that the path of least resistance is to the upside.

If bulls push the price above the $1,650 to $1,700 resistance zone, the momentum could pick up and the pair could resume its uptrend. To invalidate this positive view, the bears will have to sink the pair below $1,450.

Binance Coin (BCH) is attempting to form a bottom after an extended downtrend. The price turned down from the $135 overhead resistance on July 20 but a positive sign is that the bulls defended the 20-day EMA ($117) aggressively.

The price action of the past few days has formed a rounding bottom pattern, which will complete on a break and close above $135. If that happens, it will suggest that the BCH/USDT pair may have bottomed out at $95. The pair could then rise to the pattern target at $175 and later to $200.

Another possibility is that the pair may consolidate between the 20-day EMA and $135 for some time. A break below the 20-day EMA could tilt the advantage in favor of the bears.

The bulls have pushed the price above the resistance line on the 4-hour chart, opening the doors for a possible retest of $135. The upsloping moving averages and the RSI in the positive territory indicate that the path of least resistance is to the upside. If buyers drive the price above $135, the pair could pick up momentum and rally toward $157.

Contrary to this assumption, if the price slips below the 20-EMA, the pair could drop to the 50-SMA and later to $117. A break below this level could tilt the advantage in favor of the bears.

Axie Infinity (AXS) has been consolidating in a downtrend. This suggests that the bulls are attempting to form a bottom.

The 20-day EMA ($15.55) has flattened out and the RSI is in the positive zone, indicating a balance between supply and demand. This balance could tilt in favor of the buyers if they propel the price above the overhead resistance at $18.53. If that happens, the AXS/USDT pair could start a rally toward $25.21 and then to $28.20.

Alternatively, if the price turns down from $18.53 and breaks below the moving averages, it will indicate that the pair may spend some more time inside the range. The bears will have to sink the price below $11.85 to gain the upper hand.

The 4-hour chart shows that the price turned down sharply from the overhead resistance at $18.53, indicating aggressive selling by the bears. The sellers will now try to pull the pair to the 20-EMA. If the price rebounds off this level, the buyers will again attempt to clear the overhead resistance. If they manage to do that, it will indicate the start of a new up-move.

On the contrary, if the price breaks below the 20-EMA, the pair could slide to the 50-SMA. This is an important level to keep an eye on because if it cracks, the bullish momentum may weaken.

The moving averages have completed a bullish crossover and the RSI is near the overbought territory, indicating that bulls have the upper hand. The price could rise to $1.46 where the bears may mount a strong defense.

If the EOS/USDT pair does not give up much ground from $1.46, it will suggest that traders are not dumping their positions. That could improve the prospects of a rally above $1.46. Such a move will suggest a potential change in trend.

This positive view could invalidate if the price turns down from the current level and breaks below the moving averages.

Both moving averages are sloping up on the 4-hour chart and the RSI is near the overbought zone, indicating that the pair is in an uptrend.

The pair is facing resistance near $1.26 but the buyers have not given up much ground. This suggests that the bullish momentum remains strong. If the price turns up and breaks above $1.26, the rally could reach $1.33 and then $1.46.

Contrary to this assumption, if the price slips below $1.20, the next stop could be at the 20-EMA. If this support also cracks, the decline could extend to the 50-SMA.

2022 has been a lucrative year for hackers preying on the nascent Web3 and decentralized finance (DeFi) spaces, with more than $2 billion worth of...
Lees meer
Crypto news English

Is it foolish to expect a massive Ethereum price surge pre-and-post Merge?

Ether's (ETH) impressive 85% gain in the past thirty days will have surprised even the most bullish investors and it makes the $800 range seen...
Lees meer
Crypto news English

Over 1,900 block-producing nodes in the Solana ecosystem, new report reveals

Solana released its first ever, 'Validator Health Report' which revealed information on its network operators. According to the report the network has over 1,900 block-producing...
Lees meer
Crypto news English

Jackson, WY, USA, 11th August, 2022, Chainwire Gala, one of the leading innovators in blockchain gaming and music, has announced the launch of Gala Film. This...
Lees meer
Laad meer