Cardano (ADA) has dipped this July 21 as the market favors mounting selling pressure around its most reliable resistance levels in 2022 over a major upcoming hard fork.

ADA’s price fell 5% intraday to $0.476. The downside move came as a part of a broader retreat that started a day after it briefly climbed above its 50-day exponential moving average (50-day EMA; the red wave in the chart below) near $0.50.

The 50-day EMA has been serving as ADA’s curvy resistance level since October 2021.

Additionally, the upper trendline resistance of a broader descending channel pattern strengthened the selling sentiment around the ADA’s 50-day EMA wave. Earlier in June, the same resistance confluence had triggered a 35% price drop toward the channel’s lower trendline.

Therefore, ADA’s renewed correction move risks leading the price toward $0.384 by July or early August, down about 20% from today’s price.

However, a separate analysis sees ADA falling to deeper levels than $0.384.

Penned by TradingShot, the bearish ADA forecast draws comparisons between the ongoing correction and the one witnessed during the 2018 market crash, as shown below.

In detail, the 2018 chart above shows ADA undergoing multiple bearish rejections near its 50-day EMA (the orange wave) while trending downward in a descending channel pattern. The token’s downtrend became exhausted after correcting by nearly 93% from its local high.

“Based on 1D RSI terms, we also seem to be on the third (3) and final leg below the collapse,” TradingShot wrote, adding:

“So if ADA holders want to avoid this, they need to see the price break above the 1D MA50 and sustain trading above it for a week at least. Otherwise, completing a -93% drop from the top is possible at around 0.200.”

The latest ADA price correction appears in the days leading up to Cardano’s hard fork.

Dubbed “Vasil,” the hard fork was supposed to go live in June but was delayed until the last week of July over several outstanding bugs. Nonetheless, as of July 21, Input Output Hong Kong (IOHK), the firm behind the Cardano blockchain development, has not announced the exact launch date.

Vasil is expected to bring significant performance and capability upgrades to the Cardano blockchain, including faster block creation and higher transaction speeds. From a fundamental perspective, the upgrade could boost ADA adoption due to improved network efficiency.

But Cardano has a history of logging sharp price corrections after most network upgrades, suggesting a prevailing “sell the news” sentiment in the market. 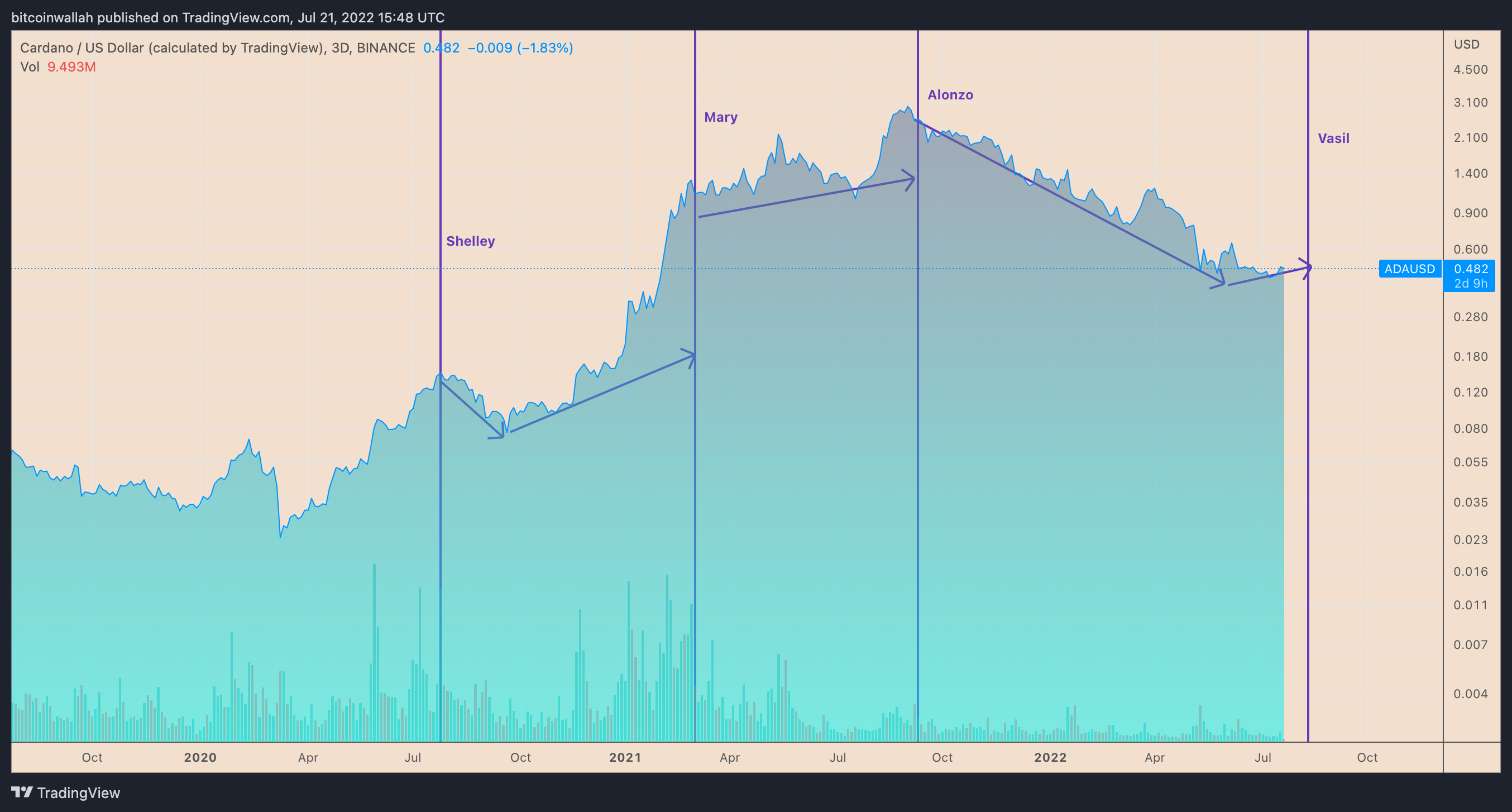 For instance, the blockchain’s Alonzo upgrade in September 2021 partly prompted ADA to rise by over 200% to its record high of $3.16 before launch. But after the upgrade, the Cardano token fell by more than 85%.

ADA has risen by only 25% after bottoming out locally at $0.384 on May 10, suggesting that Vasil’s impact on the market has been limited.

But not everyone is convinced. For example, analyst Lark Davis believes the token will “rip” after the hard fork, given it manages to hold 50-day EMA as support.

#cardano $ada has broken past its 50 day EMA, now we just need Charles to announce the date of the Vasil hard fork and this puppy will rip! pic.twitter.com/yQTiCiCE6H

Until then, ADA will likely stay under the “sell the news” pressure, pressured further by ongoing macro risks and their negative impact on crypto markets.