Bitcoin has declined about 14% this month, making it the worst performance for August since 2015 when the price had dropped 18.67%. That may be bad news for investors because September has a dubious record of a 6% average loss since 2013, according to data from CoinGlass. 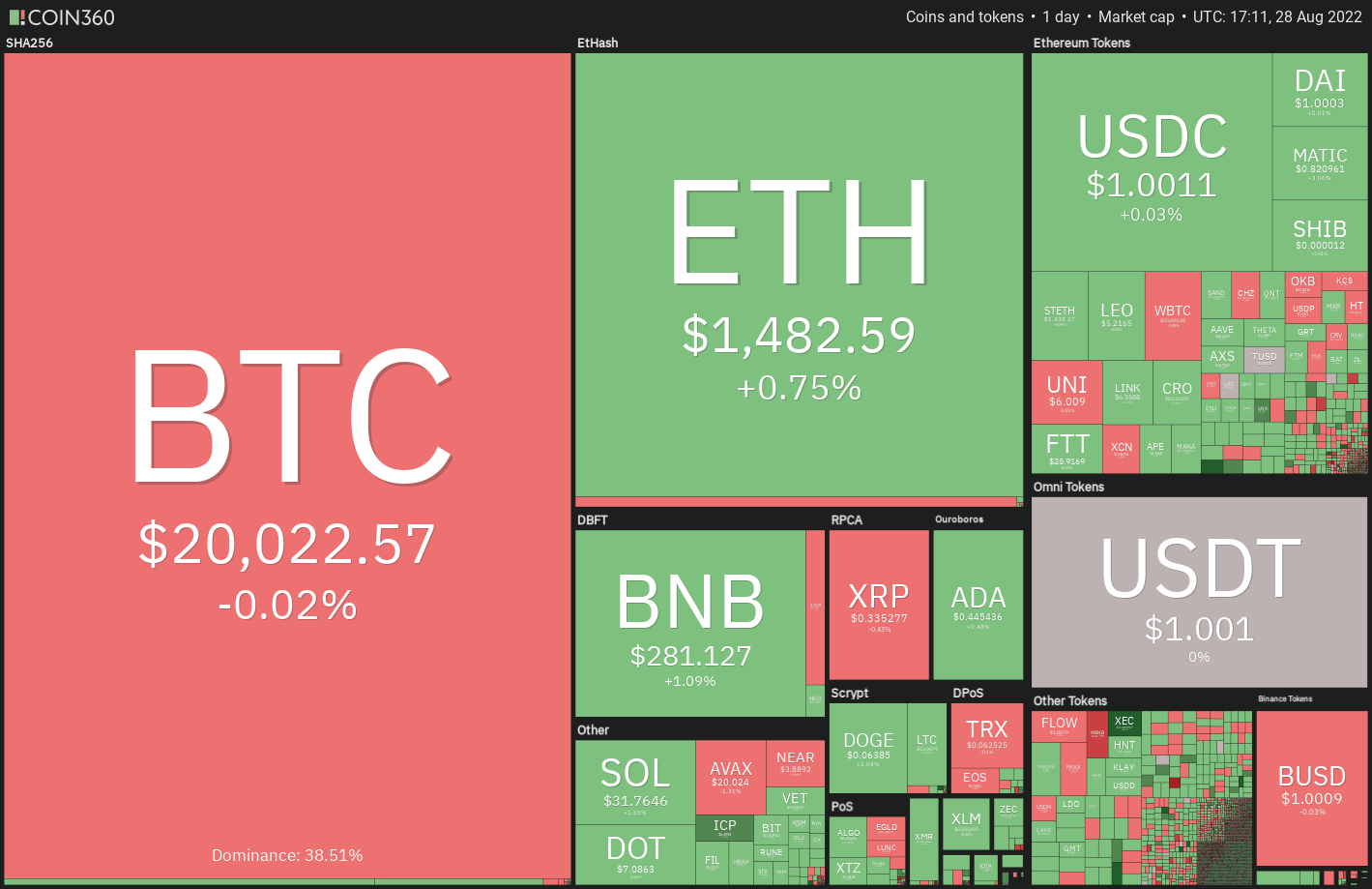 Although buying in a downtrending market is not a good strategy, traders can keep a close watch on cryptocurrencies that are outperforming the markets because, in case of any turnaround, these are likely to be the first off the block. In a bear market, traders should be patient because they are highly likely to find plenty of opportunities to buy after the market stabilizes.

A weak rebound off a strong support indicates that bulls are hesitant to aggressively buy at the level. The bulls successfully defended the support line for several days but could not push the price above the 20-day exponential moving average ($21,806). This shows a lack of demand at higher levels.

Bears pounced upon the opportunity and pulled the price below the ascending channel on Aug. 26. The 20-day EMA is sloping down and the RSI is near the oversold zone, indicating that bears are firmly in the driver’s seat.

Conversely, if the price breaks below $18,626, the pair could retest the June 18 intraday low at $17,622. The bears will have to sink the price below this level to signal the resumption of the downtrend.

The downsloping moving averages on the 4-hour chart indicate that bears are in command but the positive divergence on the relative strength index (RSI) suggests that the sell pressure could be reducing.

The first sign of strength will be a rise above the 20-EMA. If that happens, the pair could rise to the 50-SMA. A break above this level could signal that the correction may be over.

Polygon (MATIC) has rebounded off its strong support, which shows that bulls are defending the level aggressively. This increases the likelihood of the range-bound action continuing for a few more days. That is one of the reasons for focusing on this altcoin.

The bulls are attempting to push the price above the moving averages. If they can pull it off, it will suggest that the MATIC/USDT pair could attempt a rally to the overhead resistance at $1.05. This level could attract strong selling by the bears.

Alternatively, if the price turns down from the moving averages, it will suggest that bears are selling on rallies. The bears will then attempt to sink the price below the crucial support at $0.75. If they succeed, the pair could decline to $0.63.

The bulls have pushed the price above the moving averages, which is the first indication that the selling pressure may be reducing. Another positive sign is that the RSI has made a positive divergence, a sign that the bears may be losing their grip.

The buyers will try to push the price above the overhead resistance at $0.84. If they succeed, the pair could rally to $0.91 which may again act as a strong resistance. To invalidate this positive view, the bears will have to sink the price below $0.75.

Cosmos (ATOM) has been selected because it is trading above the 50-day SMA ($10.58) and is near the psychological support at $10.

The bulls are expected to defend the zone between $10 and the 50-day SMA aggressively. If the price rebounds off this zone and rises above the 20-day EMA ($11.39), it will indicate that the selling pressure may be reducing.

The ATOM/USDT pair could then rise to the overhead resistance at $12.50 and later to $13.45. A break above this level could suggest that the downtrend may be over.

Contrary to this assumption, if the price turns down and slips below the support zone, it could start a deeper correction. The pair could then decline to $8.50.

The 20-EMA has turned down on the 4-hour chart and the RSI is in the negative territory, indicating that bears have the edge in the near term. The sellers will have to sink and sustain the price below the uptrend line to challenge the psychological support at $10.

Conversely, if the price rebounds off the uptrend line, it will suggest that bulls are buying the dips to this level as they have done on previous occasions. The buyers will have to push the price above the moving averages to open the doors for a possible rally to $12.50.

Monero (XMR) has made it to the list because it is holding above its immediate support at $142. This suggests that lower levels are attracting buyers.

This positive view could invalidate in the near term if the price turns down and breaks below the strong support at $142. If that happens, the pair could slide to $132 and later to $117. The downsloping 20-day EMA and the RSI in the negative territory indicate that bears have a slight edge.

Conversely, if the price turns down from the 20-EMA, it will suggest that bears are selling on minor rallies. The pair could then decline to the strong support at $142. If this support cracks, it will suggest the start of a deeper correction.

Chiliz (CHZ) has found a place in this list for the third consecutive week. That is because, even after the recent correction, it remains in an uptrend.

Buyers pushed the price above the overhead resistance of $0.26 on Aug. 23 and Aug. 24 but they could not sustain the higher levels as seen from the long wicks on the candlesticks. This may have tempted the short-term traders to book profits. That pulled the price down to the breakout level of $0.20, which is just above the 20-day EMA ($0.20).

The bulls purchased this drop and are attempting to resume the up-move toward the overhead resistance at $0.26. The bulls will have to clear this hurdle to open the doors for a possible rally to $0.33.

The rising moving averages suggest advantage to buyers but the negative divergence on the RSI indicates that the bullish momentum may be weakening. If the price turns down and breaks below the 20-day EMA, the advantage will turn in favor of the bears. The pair could then decline to the 50-day SMA ($0.15).

The 20-EMA on the 4-hour chart is flattening out and the RSI has been oscillating near the midpoint, indicating a balance between buyers and sellers. This could keep the pair range-bound between $0.20 and $0.26 for some time.

The next trending move could start if bulls push and sustain the price above $0.26 or below $0.20. Until then, the bulls are likely to buy the dips to the support at $0.20 and sell near the overhead resistance at $0.26. Trading inside the range is likely to remain volatile and random.