Regulators have a weak case against FTX on deposit insurance

In a cease-and-desist letter to fast-growing crypto exchange FTX, the Federal Deposit Insurance Corporation (FDIC) shed light on a now-deleted tweet from the exchange’s president, Brett Harrison, and issued a stark warning over the company’s messaging.

Although Harrison stewarded FTX to its best-ever year in 2021, increasing revenue by 1,000%, the firm now faces the unenviable prospect of running afoul of a powerful government agency. 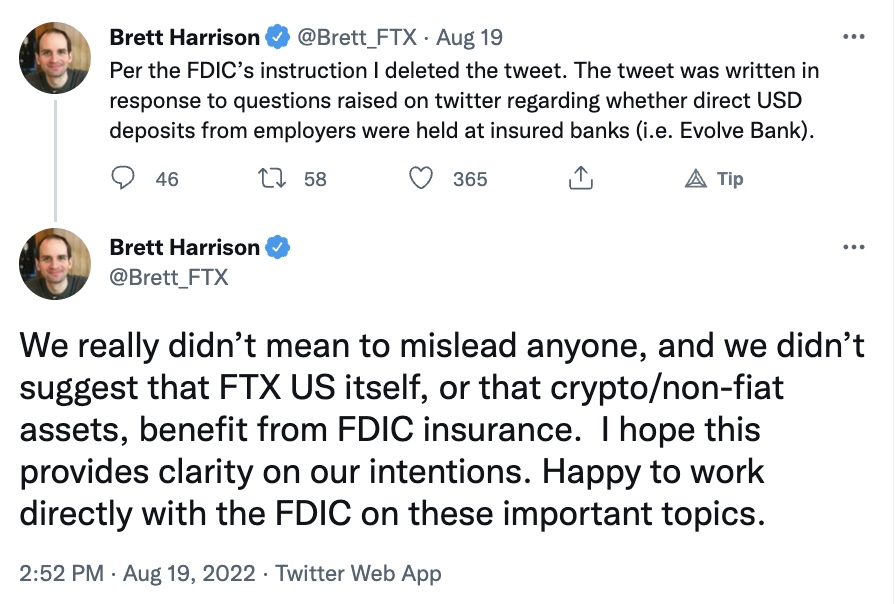 In an attempt to clarify the situation to his 761,000 Twitter followers, Brett said, “Clear communication is really important; sorry! FTX does not have FDIC insurance (and we’ve never said so on website etc.); banks we work with do. We never meant otherwise, and apologize if anyone misinterpreted it.”

But it seems the statements made on Twitter by Harrison in response to the FDIC cease-and-desist letter over “false statements” were factually correct: User funds are held at banks insured by the FDIC.

Related: FDIC-FTX spat is another reason for investors to get their funds off exchanges

His original communications were construed as if the funds were themselves insured, which they’re not. Either way, firms are not allowed to mention a relationship with the FDIC unless there is a direct link and the correct language is used to clearly describe it.

This was an error in messaging on the part of FTX. A mistake was definitely made, inciting perhaps rightful outrage from the community. They may have taken this to believe they were transacting with an insured exchange, which could ensure catastrophic failure would not lead to loss of funds, after all.

BREAKING: #FDIC just issued a cease and desist letter to #FTX for misleading statements, such as client deposits being insured by FDIC. It is good that finally FDIC is doing something about misleading and fraudulent #crypto firms. pic.twitter.com/vl0JDtM6LY

However, it’s almost certainly not the case that there were sinister motives. Harrison wrongfully communicated the relationship between FTX and the FDIC and was swiftly corrected before he immediately moved to rectify the official FTX position on deposit insurance. Nothing more than a storm in a teacup, one might say.

The FDIC issued similar cease-and-desist letters to four other companies on the same day for the exact same reason: implying there is deposit insurance when none exists. It begs the question of whether this is really a result of nefarious actions.

Companies like Celsius do represent a threat to the industry

There is plenty of chagrin to throw around the crypto space. Take Celsius, for example. It’s fair to argue the company’s policy terms and conditions did not align with what it implied through its messaging. Around 1.7 million customers were left in the lurch with little idea of whether they would be able to retrieve their funds.

Rug pulls, scams and fraud thrive in a low-regulation industry, and indeed, this means there are plenty of villains out there to direct public anger at.

When it comes to FTX, there is an observable mission to do serious business and foster legitimacy in the world of cryptocurrencies. This is an exchange very much on the ascendancy, attracting and retaining over 1 million users and trading around $10 billion in daily volume as of February 2022.

Consumers should not distrust or dislike big players just because they are big. These firms are likely the harbingers of mainstream adoption, which is surely the aim of crypto. Self-custody is obviously the safest way to store funds, but not everyone can ensure they mitigate all associated risks. Their best bet is an exchange like FTX.

A focus on the experience of the end-user is perhaps murky when it comes to cryptocurrencies. Volatility means retail investors most often lose money, while tracing transactions can be difficult, and the government wants to retain the ability to do so.

Right now, it seems regulators can only step in after an egregious mishap must be corrected. While crypto is seeping into the mainstream, overall public perception seems to be negative, and mass adoption will only be possible years into the future.

Regulations working in tandem with the emergence of mainstream solutions that provide a genuinely great user experience could be key. Policymakers have had plenty of time to prepare for a future with blockchains underpinning vast swathes of real-world applications. Once the technology matures to the point that it becomes as simple as using the internet, the prospect of intelligent regulatory oversight becomes far more likely.

Toby Gilbert is the CEO of Coinweb.io, a cross-chain computation platform. He graduated from London’s Global University (UCL) before starting a career in the tech and telco spaces. He invested in and exited three telecommunications companies in Europe, Africa and Asia before joining Coinweb in 2018. He also co-founded the Blockfort and OnRamp DeFi projects.

The opinions expressed are the author’s alone and do not necessarily reflect the views of Cointelegraph. This article is for general information purposes and is not intended to be and should not be taken as legal or investment advice.

New York, New York, 3rd October, 2022, Chainwire A collective of Jewish creators have teamed up to launch an NFT project that will raise funds for...
Lees meer
Crypto news English

What remains in the NFT market now that the dust has settled?

Over the last two years, nonfungible tokens (NFTs) have emerged as one of the most active and noticeable aspects of Web3. The data stored on blockchains...
Lees meer
Crypto news English