The equity markets in Europe and the United States are seeing a sea of red as traders continue to sell risky assets due to the geopolitical situation. Bitcoin (BTC) and several major cryptocurrencies are also witnessing profit-booking after the recent rise.

Another reason that could be keeping investors on the edge is the upcoming Federal Open Market Committee (FOMC) meeting on March 16. A statement from Fed Chair Jerome Powell on March 2 highlighted that the central bank is likely to hike rates this month.

Fitch Ratings chief economist Brian Coulton expects core inflation to remain high in 2022 and the Fed to boost the “Fed fund rate to 3% by the end of 2022.” 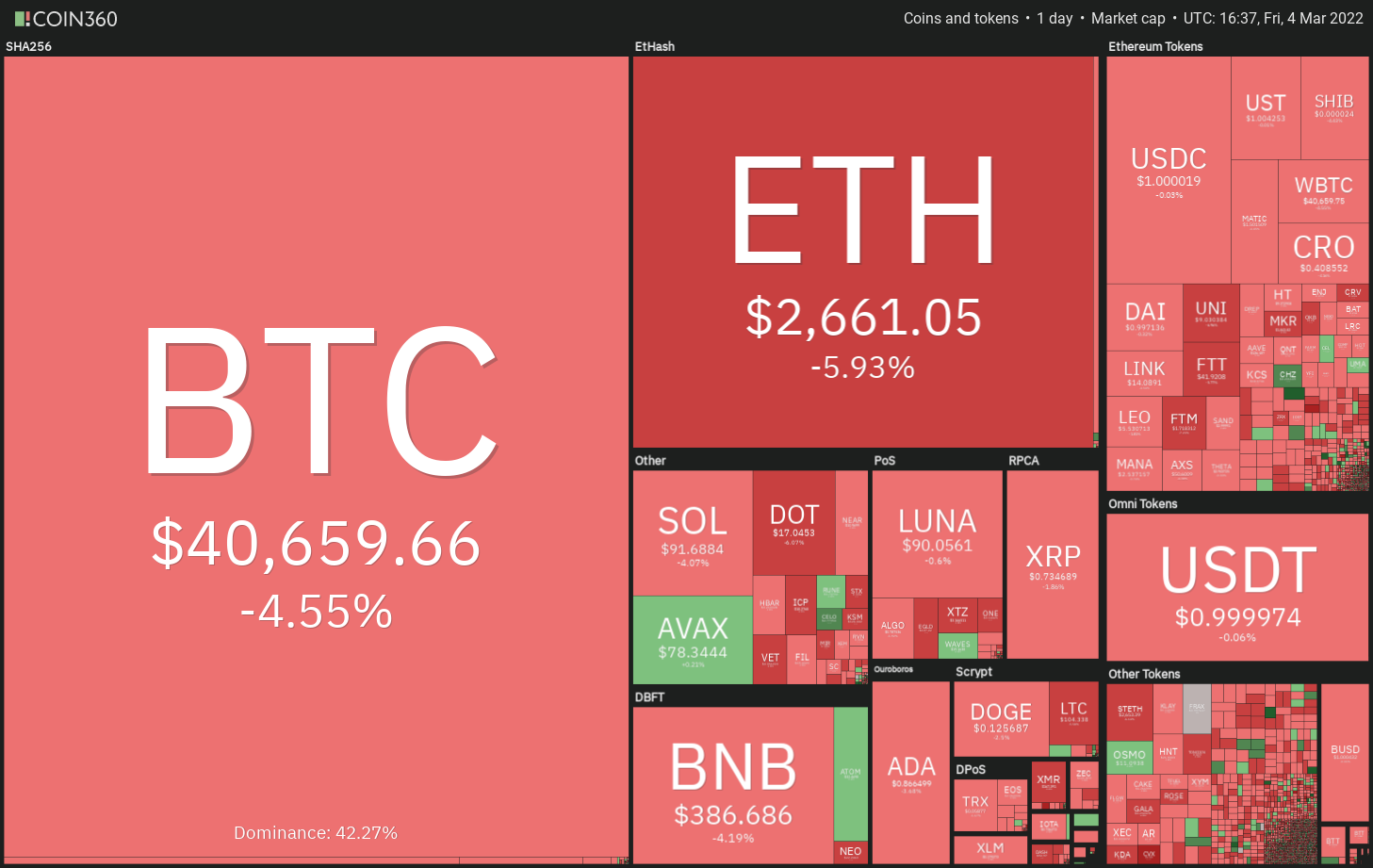 ExoAlpha managing partner and chief investment officer David Lifchitz said that Bitcoin may remain soft in the short term because a rate hike by the Fed technically “strengthens” the U.S. dollar, and hence “weakens” Bitcoin. However, he does not expect a drastic impact on Bitcoin.

Several uncertainties could cap the rallies to the upside in the short term. Let’s analyze the charts of the top-10 cryptocurrencies to spot the critical support and resistance levels.

Bitcoin turned down from $45,400 on March 2, indicating that bears are defending the overhead resistance at $45,821. The price has dropped to the moving averages, which is an important support to watch out for.

If the price rebounds off the moving averages, it will suggest that bulls are buying on dips. The bulls will then try to push the price above the overhead resistance zone at $45,821 and the resistance line of the ascending channel. If they succeed, the BTC/USDT pair could rally toward the next major resistance at $52,088.

Contrary to this assumption, if the price slips below the moving averages, it will suggest that traders are selling at higher levels. That could open the doors for a possible drop to $37,000 and then to the support line of the channel.

The flattish 20-day exponential moving average ($40,899) and the relative strength index (RSI) near the midpoint suggest a few days of range-bound action.

Ether (ETH) broke and closed above the 50-day simple moving average ($2,838) on Feb. 28, but the bears successfully defended the psychological level at $3,000. This may have led to selling by short-term traders, which has pulled the price below the moving averages.

The ETH/USDT pair could now drop to the support line of the symmetrical triangle. This is an important support for the bulls to defend because if this level cracks, the selling could intensify. If the price sustains below the triangle, the downtrend may resume. The pair could then drop to $2,300 where the bulls are expected to provide support.

Alternatively, if the price turns up from the support line, the bulls will try to push the pair above the overhead resistance at $3,000 and challenge the resistance line of the triangle.

Although bulls pushed Binance Coin (BNB) above the 50-day SMA ($403), they could not sustain the higher levels. This suggests that bears are defending the level with all their might.

The sellers are trying to sink and sustain the price below the 20-day EMA ($391). If they do that, the BNB/USDT pair could drop toward the strong support at $350.

Alternatively, if the price rebounds off the current level, the possibility of a break and close above the 50-day SMA increase. That could open the doors for a possible rally to the overhead resistance at $445.

The flattish 20-day EMA and the RSI near the midpoint suggest a range-bound action in the near term.

Ripple (XRP) turned down from the downtrend line and dropped to the 50-day SMA ($0.73) indicating that bears have not yet thrown in the towel.

If the price rebounds off the 50-day SMA, the buyers will again try to push and sustain the XRP/USDT pair above the downtrend line. If they manage to do that, the buying momentum could pick up and the pair may rally toward $0.91.

On the other hand, if the price sustains below the 50-day SMA, the bears will attempt to pull the pair to $0.62. The flattish moving averages and the RSI near the midpoint do not give a clear advantage either to the bulls or the bears.

Terra’s LUNA token has failed to sustain above $94 but the positive sign is that the buyers have not given up much ground. The bulls have repeatedly bought the dip to $86 in the past three days.

Usually, a tight consolidation near an overhead resistance is a sign of strength, which resolves to the upside during an uptrend. If bulls push and sustain the price above $94, the LUNA/USDT pair could challenge the all-time high at $103.

A break and close above this level will indicate the resumption of the uptrend. The pair could then rally toward $110. The rising 20-day EMA ($72) and the RSI near the overbought zone indicate advantage to buyers.

This positive view will invalidate in the short term if the price turns down and slips below $86. That could pull the price to $80.

Solana (SOL) rose above the resistance line of the descending channel on March 2 but the bulls could not overcome the barrier at the 50-day SMA ($103). The failure to do so could have attracted profit-booking by short-term traders. This pulled the price back inside the channel.

If bears pull and sustain the price below the 20-day EMA ($95), the SOL/USDT pair could drop to the strong support at $81. This is an important level to keep an eye on because the bulls have successfully defended it twice in the past few days.

If the price again rebounds off $81, the pair could rise to the 50-day SMA and then stay range-bound between these two levels for a few days.

A break and close above the 50-day SMA will be the first sign that the downtrend may be ending. The pair could then rise to $122. Alternatively, if bears pull and sustain the pair below $81, the decline could extend to $66.

During strong downtrends, when strong supports are broken, they usually flip to resistance and that is what happened with Cardano (ADA). The relief rally stalled at the breakdown level at $1, indicating that bears are defending this level.

The bears will now make an effort to pull the price below the immediate support at $0.82 and challenge the Feb. 24 intraday low at $0.74. If this level also cracks, the ADA/USDT pair could extend its downtrend to $0.68.

Contrary to this assumption, if the price rebounds off $0.82, the bulls will again try to clear the hurdle at $1. If they succeed, it will be the first sign that the sellers may be losing their grip. The bulls will have to push and sustain the pair above the channel to indicate a possible trend change.

Avalanche (AVAX) has turned down from the downtrend line of the descending channel for the fourth time. This suggests that traders are selling the rallies to this level.

The bears are attempting to sustain the price below the moving averages while the bulls are buying the dips and trying to maintain the AVAX/USDT pair above the 20-day EMA ($80). The flattish 20-day EMA and the RSI near the midpoint indicate a balance between supply and demand.

If bulls push the price above the 20-day EMA, the pair could again rise to the downtrend line. The bulls will have to clear this hurdle to signal a possible change in trend. Alternatively, if the price breaks below $71, the pair could drop to $64.

Polkadot’s (DOT) failure to break above the 50-day SMA (19) indicates that the sentiment remains negative and traders are selling on rallies to stiff resistance levels.

The bears have pulled the price below the 20-day EMA ($18) and will now seek to challenge the strong support zone at $16 to $14. This zone has held successfully on two previous occasions, hence the bulls will again try to defend it with vigor.

If the price rebounds off the zone, the DOT/USDT pair could rise to the moving averages. A break and close above the 50-day SMA will be the first indication that the downtrend could be coming to an end.

Conversely, a break and close below the zone will resume the downtrend. The pair could then drop to psychological support at $10.

Dogecoin’s (DOGE) relief rally stalled at the 20-day EMA ($0.13), indicating that bears are unwilling to let go of their advantage. The bears are trying to pull the price to the strong support at $0.12.

Repeated retests of a support level tend to weaken it and it suggests that bulls are unable to sustain the higher levels. If the price breaks and sustains below $0.12, the DOGE/USDT pair could plummet to the psychological level at $0.10.

The downsloping moving averages and the RSI in the negative territory indicate the path of least resistance is to the downside. This negative view will invalidate in the short term if bulls push and sustain the pair above the 50-day SMA ($0.14).