Gold made a strong start to the new year and is trading close to a seven-month high on expectations that the United States Federal Reserve may slow down and hike rates only by 25 basis points in its next meeting on Feb. 1.

Cryptocurrency markets have also shown a mild uptick but are yet to make a decisive move higher. One of the reasons could be renewed fears regarding Digital Currency Group’s liquidity issues, which again came into focus after Gemini co-founder Cameron Winklevoss penned an open letter to DCG CEO Barry Silbert on the alleged $900 million that Genesis owes Gemini. 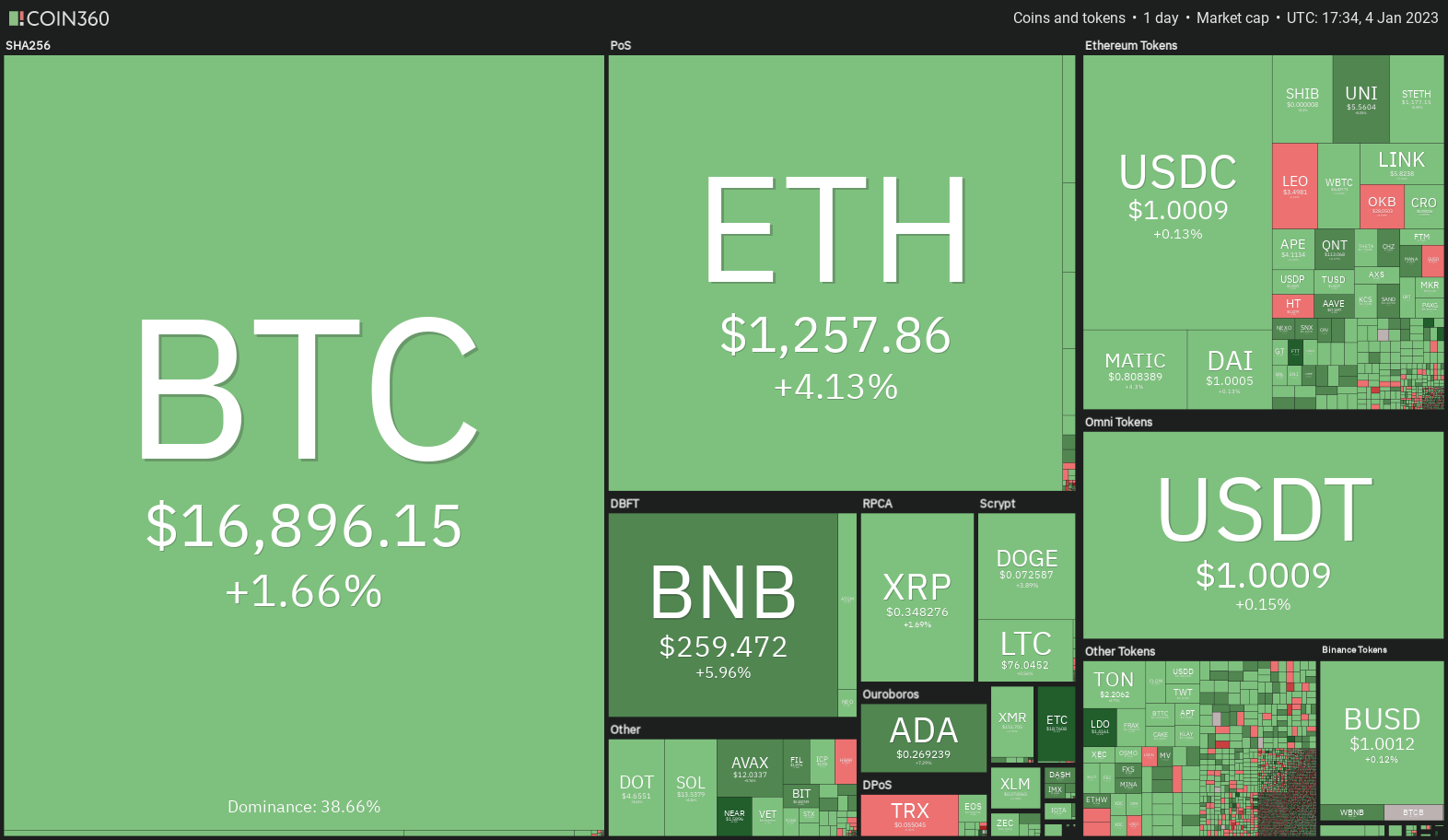 Among all the gloom, Circle’s chief strategy officer and head of global policy, Dante Disparte, sounded positive and said in a Jan. 2 post for The World Economic Forum that the current crisis in the cryptocurrency space may eventually prove to be a boon. Disparte believes that the crypto bear market of 2022 could start “a handover of crypto technology and blockchain infrastructure to steadier hands.”

Could cryptocurrencies break out of the slumber and start a sustained recovery as investors allocate fresh money to various asset classes? Let’s study the charts of the top-10 cryptocurrencies to find out.

Bitcoin (BTC) climbed above the moving averages on Jan. 4, indicating buying at lower levels. The next level to watch on the upside is $17,061 where the bears may mount a strong resistance.

If buyers succeed in bulldozing their way through $17,061, the BTC/USDT pair could pick up pace and sprint toward $18,388. This level could again witness a tussle between the bulls and the bears.

On the contrary, if the price fails to sustain above $17,061, it will suggest that bears are selling on relief rallies. That could keep the pair range-bound for a few more days. The bears will have to pull the price below the strong support of $16,256 to gain the upper hand.

Ether (ETH) climbed above the moving averages on Jan. 4, indicating that bulls have the upper hand in the near term. The price could start its trek toward the overhead resistance at $1,352.

The bears are expected to fiercely defend the zone between $1,352 and the downtrend line. If the price turns down from this zone, the ETH/USDT pair could drop to the moving averages.

If the price rebounds off the 20-day exponential moving average ($1,219), it will suggest a potential change in sentiment from selling on rallies to buying on dips. That could improve the prospects of a break above the downtrend line.

The short-term advantage could tilt in favor of the bears if the price turns down and plummets below $1,150.

After consolidating near the breakdown level for the past several days, BNB (BNB) made a decisive move on Jan. 4 and broke above the overhead resistance. This suggests that the break below $250 on Dec. 16 may have been a bear trap.

The 20-day EMA ($251) has flattened out and the relative strength index (RSI) has risen into positive territory, indicating that bulls are on a comeback. The momentum could pick up further if buyers kick the price above the 50-day simple moving average ($268). That could clear the path for a potential rally to $300.

If bears want to trap the aggressive bulls, they will have to swiftly yank the price below the support at $236. That could accelerate selling and pull the BNB/USDT pair to the vital support at $220.

XRP (XRP) turned down from the 20-day EMA ($0.35) on Jan. 3 but the bulls successfully guarded the support line of the symmetrical triangle.

The XRP/USDT pair has reached the 20-day EMA, which could witness a tough battle between the bulls and the bears. If bulls come out on top, the pair could climb to the resistance line of the triangle.

Conversely, if the price once again turns down from the 20-day EMA, it will suggest that bears are selling on relief rallies. That could increase the possibility of a break below the support line of the triangle.

Dogecoin (DOGE) turned down from the downtrend line on Jan.3 but the bears did not allow the price to dip below the crucial support at $0.07. This indicates demand at lower levels.

The DOGE/USDT pair could rise to the 20-day EMA ($0.07) and if this level is crossed, the next stop could be $0.08. The bears are expected to defend this zone with vigor because a break and close above it could attract a strong pullback to $0.11.

Contrarily, if the price turns down from the 20-day EMA, the bears will make one more attempt to yank the pair below the crucial support near $0.07. If they can pull it off, the pair could slump to the major support near $0.05.

Cardano’s (ADA) recovery has reached the first hurdle at the 20-day EMA ($0.26). The bears successfully defended this level during previous relief rallies, hence they may try to do that again.

However, the RSI has risen close to the midpoint, indicating a build-up in positive momentum. That increases the likelihood of a break above the 20-day EMA. If that happens, the ADA/USDT pair could attempt a rally to the downtrend line of the falling wedge pattern.

Conversely, if the price fails to sustain above the 20-day EMA, it will suggest that the bears are active at higher levels. They will then again try to resume the downtrend by pulling the price below $0.24.

If bulls thrust the price above the 20-day EMA, the MATIC/USDT pair could start its northward march toward $0.97. The 50-day SMA ($0.84) could act as a minor hurdle but it is likely to be crossed.

On the downside, the $0.75 remains the key level to keep an eye on. A break and close below it could pull the price to the support of the range at $0.69. The price action inside the range could continue to be random and volatile.

Polkadot’s (DOT) recovery has risen above the 20-day EMA ($4.59) on Jan. 4, which is the first sign that the bears may be losing their grip.

The bulls will try to strengthen their position further by pushing the price above the 50-day SMA ($5.02). If they do that, the DOT/USDT pair could soar the downtrend line. This level could again behave as a major barrier.

Alternatively, the bears will try to defend the zone between the moving averages. If the price turns down and breaks below the 20-day EMA, it will suggest that the sentiment remains negative and traders are selling on rallies. The pair could then retest the support at $4.22.

Litecoin (LTC) broke and closed above the overhead resistance at $75 on Jan. 3., suggesting that the bulls are trying to start a new up-move.

The 20-day EMA ($70) has started to turn up and the RSI is in the positive territory, indicating advantage to buyers. There is a minor resistance at $78, which if crossed could transport the LTC/USDT pair to $85.

The bears are unlikely to give up easily and may try to stall the recovery in the $78 to $85 zone. They will have to pull the price back below the moving averages to trap the aggressive bulls. The pair could then drop to $65.

Uniswap’s (UNI) break below the support line of the symmetrical triangle on Dec. 28 proved to be a bear trap as the bulls purchased the dip and pushed the price above the 20-day EMA ($5.35) on Jan. 2.

Buyers are trying to build upon the strength and overcome the obstacle at the 50-day SMA ($5.58). If they manage to do that, the UNI/USDT pair could rally to the resistance line of the triangle. This level may again act as a stiff hurdle.

If the price turns down from the resistance line, the pair may stay inside the triangle for some more time. The bears will gain the upper hand if they manage to sink the pair below the $4.94 to $4.71 support zone.