The world’s most popular sport suffered an own goal as European clubs canceled their partnerships with Bitci, a Turkish crypto exchange. However, plenty of substitute crypto companies are on the bench, ready to bring crypto to the mainstream through soccer.

Growing yet unclear cryptocurrency regulations in Turkey have reportedly hampered the company’s ability to make payments, leading to a lack of confidence among major soccer clubs.

Portugal’s Sporting CP, the green-and-white-striped footballers famed for being the club where Cristiano Ronaldo cut his teeth, whereas Italian club Spezia, play in Italy’s Serie A, have also canceled their partnership with Bitci. The F1 powerhouse Mclaren Racing terminated their sponsorship deal with Bitci earlier in February.

Barcelona also recently announced that they would favor a partnership deal with Binance over Spotify, despite the launch of their fan token in April 2021.

While it would appear that crypto and soccer partnerships are down to 10 men; deals, enthusiasm, and sponsorships for crypto among football clubs are an open goal.

Seventeen of England’s 20 football clubs have at least one deal with a cryptocurrency firm. For Watford soccer club, not only does Dogecoin (DOGE) appear on the shirtsleeve, but Stake.com sponsors the main body of the shirt. 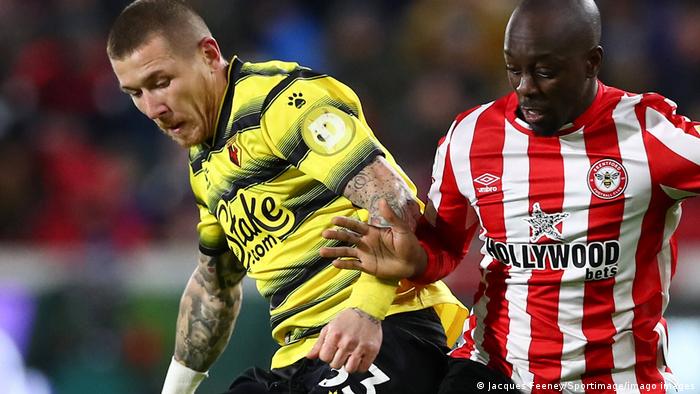 Eighty miles Southeast of Watford, in Southampton “the Saints,” as they are known locally, launched a Bitcoin (BTC) hunt on Feb. 23. In partnerships with crypto betting site Sportsbet.io, the online quiz winner takes home a whole Bitcoin.

Still in England, Bitcoin podcaster Peter McCormack sparked the beginnings of an English underdog story as he bought his local club Bedford FC. He’s keen to take on the Premiere League with the help of Bitcoin and its community.

While Crypto.com recently renamed the American football stadium in Los Angeles from the Staples Center to the Crypto.com arena, in Italy, the entire football league is sponsored by the cryptocurrency giant.

Elsewhere, fan tokens are also growing in popularity among European football fans. As Cointelegraph reported, blockchain sports firm Chiliz has caught the eye of major football clubs, as Socios, its platform, announced a deal with UEFA.

While a crypto sponsor for a European national team may have to wait till next season, the Argentine team was the first national soccer club worldwide to take on a crypto sponsor. Binance recently partnered with the white and sky blues.

Finally, as European soccer waits for a national team to be sponsored by crypto, in rugby football, BitPanda crypto exchange now sponsors the Azurri. The exchange made the announcement ahead of Italy’s clash with the six nations rugby teams in January.

We are proud to announce that we will be the main sponsor of @Federugby, the Italian Rugby Federation.

So, @SixNationsRugby fans, get ready to spot our logo whenever gli Azzurri are playing!