The highly anticipated first trip occurred on July 16 and was open to Otherdeed NFT land owners, known as Voyagers, who have all snapped up tokenized land plots in the Otherside virtual world. It appears to have been a resounding success, with numerous community members taking to Twitter to express their enthusiasm for the event.

Today’s @OthersideMeta First Trip was truly a wild experience! Jumping through the swamp portal legit gave me chills and it was insane to see 4500 voyagers running around a large, immersive space. pic.twitter.com/Nl5luxaZl3

The 4,500 Voyagers first joined a blank virtual lobby as Voyager avatars before they all followed a giant Bored Ape through a colorful portal into the Otherside Metaverse. Once the Voyagers arrived in a location called the Biogenic Swamp, they were directed towards a centrally located stadium where they could test out the avatar dynamics such as dancing, running, jumping, and emojis.

Such an incredible experience. @OthersideMeta
Here are my favorite screenshots from the first trip: pic.twitter.com/XiQkwp9SZm

From there, they were able to explore a few other select areas and interact with the environment, which featured giant creatures that were walking around attacking Voyagers if they got too close.

In the early testing phases of the project, which includes several “trips,” Yuga Labs stated that only Otherdeed owners and third-party developers would be able to access Otherside. The team noted that these Voyagers would be able to provide critical feedback on the platform and essential aspects such as software development kits and in-game building tools. 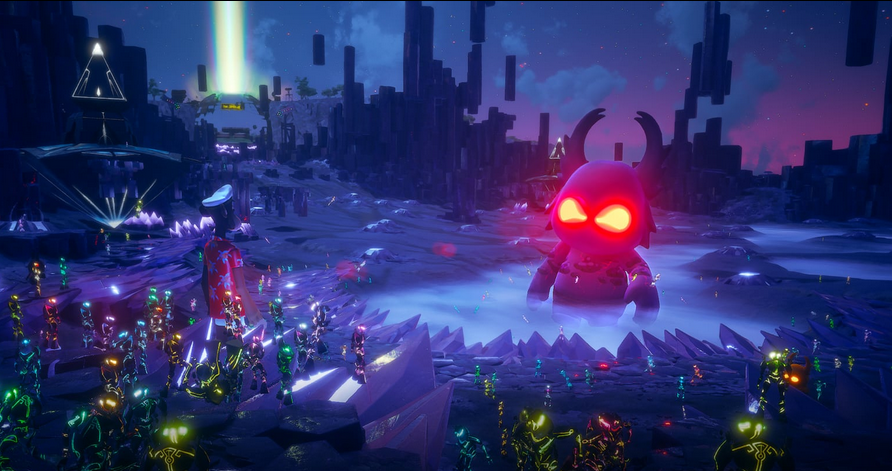 Shortly after the first trip went live, Yuga Labs released a “litepaper” giving a brief of the principles behind Otherside and how the project will progress moving forward. Initially, there will be three phrases; however, only the first one has been outlined so far.

Today’s tech demo has ended. Thank you to all the Voyagers who participated: we’ll tweet here when your credit is ready later today. If you’re already hungry for more Otherside, we’ve released a litepaper: https://t.co/XPlNEwPGCC. See for more

The first phase will include an 11-part storyline game mode surrounding a “mysterious Obelisk” that has appeared in Otherside. The game mode will also allow users to explore what can “be harvested, crafted, traded, bought, and sold” in the game.

“Voyagers will play a large role in shaping the core capabilities of the platform through exclusive events, playtesting opportunities, and as co-developers of our Otherside Development Kits (ODKs),” the litepaper reads, adding that:

“In order to plant the seeds for a successful community, we are starting development on Otherside with Voyagers, who are our first adopters and believers. They are a crucial part of Otherside’s history and are invited to join the Voyager’s Journey.”

In terms of principles, Yuga Labs stated that the platform is being designed with a community-first approach, “genuine” asset ownership, and interoperability that will see the support of NFTs from other projects. The team also hopes to include incentives and support such as education, experience, and leadership from partnered entities that are well “established and respected” in the crypto space.

Related: Believe it or not, metaverse land can be scarce after all

The Otherdeed NFTs have seen strong demand since their launch in May, with the collection generating more than $1 billion worth of sales volume in just three months, according to data from CryptoSlam. In terms of all-time sales, the figure placed Otherdeed as the seventh highest selling NFT project ever.

Yuga Labs also notably has a strong foothold in the top 10, with its other original projects, BAYC and the Mutant Ape Yacht Club (MAYC), ranked as the third and fourth highest selling NFT projects of all time at $2.3 billion and $1.6 billion worth of sales apiece.

There are 200,000 plots of tokenized land in Otherside, and the floor price of the NFTs on OpenSea is sitting at 2.87 Ether (ETH), worth roughly $3,900 at the time of writing. However, these prices are generally for the smaller and lower-tier land plots.

Blockchain venture capital funding down over 43% in July: Report

Typically a lagging indicator of the sector's health, the explosion of venture funding in the blockchain sector in 2021 and the first half of 2022...
Lees meer
Crypto news English

How can DAOs involve fans in filmmaking? Expert answers

As more people begin to integrate Web3 technologies into entertainment and production, the use case for decentralized autonomous organizations (DAOs) in filmmaking has been highlighted...
Lees meer
Laad meer