Scammers have hacked the official Twitter account of the Embassy of India in Oman, replacing the profile picture with Ripple CEO Brad Garlinghouse and using the reply function to spam users with fake XRP giveaway phishing links.

At the time of publication, the Twitter account OmanEmbassy_Ind showed several retweets matching those of Garlinghouse, seemingly in an attempt to make the activity look legitimate. The hacked account has been responding to tweets using the hashtag XRP, encouraging users to sign up for a fake giveaway of 100 million tokens – worth more than $42 million at an XRP price of $0.42. 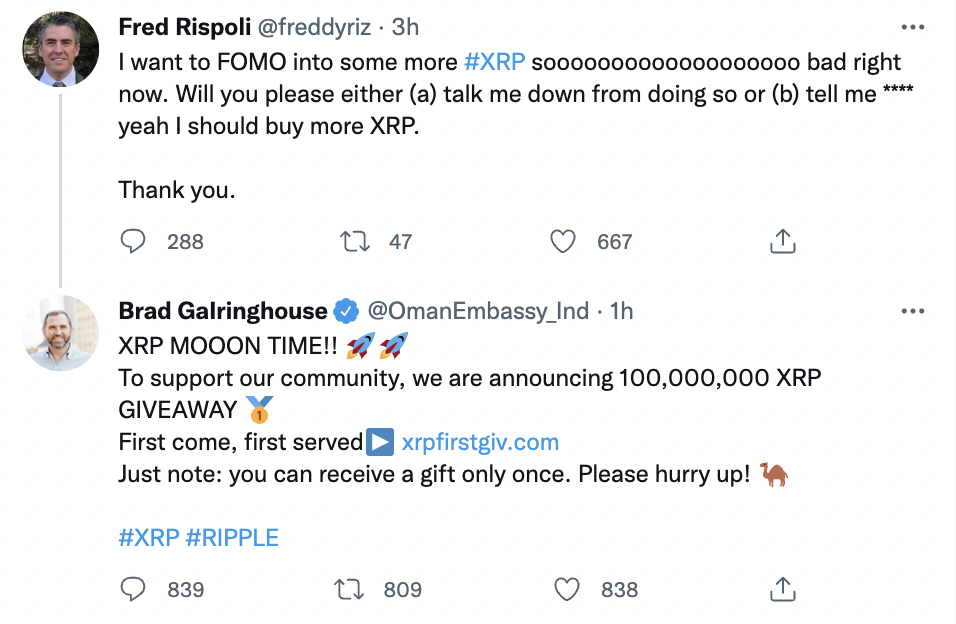 The hackers behind the fake Ripple XRP CEO, identified as ‘Galringhouse’, may have been responsible for breaching India-based crypto exchange CoinDCX’s Twitter account given the similar fake giveaways. CoinDCX reported on Tuesday that it had restored access to its account. While the crypto exchange’s Twitter account had more than 230,000 followers, the Embassy of India in Oman only showed 4,119 at the time of publication.

On Monday, Caroline Pham of the United States Commodity Futures Trading Commission made waves on social media after posting a photo of her standing with Garlinghouse in Ripple Labs’ offices. A decision in a Securities and Exchange Commission case alleging Ripple’s XRP sales violated securities laws may be forthcoming after both sides filed motions for summary judgment on Saturday.

Related: Hackers might be responsible for removing $4.8M from crypto exchange ZB.com: PeckShield

Many hackers have used social media to attempt to scam unsuspecting users out of both crypto and fiat since the platforms were created. Using high-profile figures in the crypto space – like Garlinghouse, Elon Musk, and others – is a common tactic. In June, the U.S. Federal Trade Commission reported that scammers had pilfered roughly $1 billion in crypto from 2021 to the first quarter of 2022, with half of all crypto-related scams originating from social media platforms.

Crypto and decentralization could influence voters in 2022 US midterm elections: Report

A poll of 800 likely midterm voters in four U.S. swing states suggested that the overwhelming majority favored ideas around decentralization, and many were HODLers. According...
Lees meer
Crypto news English