The freshly launched Ethereum-based Moonbirds NFT project is soaring to the top of the trade volume charts after generating $290 million worth of sales in just four days.

There are 10,000 computer-generated pixel owl avatar NFTs in total, which were promptly sold out on April 16 for a mint price of 2.5 Ether (ETH) per NFT, or $7,700 at current prices. The floor price (minimum average sale) has since exploded on secondary markets, with OpenSea currently showing a hefty sum of 18.45 ETH ($56,800).

According to data from CryptoSlam, the project has generated more than $289.9 million worth of secondary sales (figure also includes mint sales). The figure places the project as the top-selling NFT collection over the seven-day and 30-day metrics, and second over the past 24 hours.

Looking at the 30-day chart, the gulf in volume is notable, with Moonbirds’ NFT sales figures a whopping 52% ahead of second-placed Azuki and its $189.3 million worth of volume, and 76% of the BAYC at $164.6 million.

DappRadar also highlighted that the Moonbirds #7963 NFT fetched the ninth-largest sale of all NFT collections over the past week at 135 ETH ($410,000). 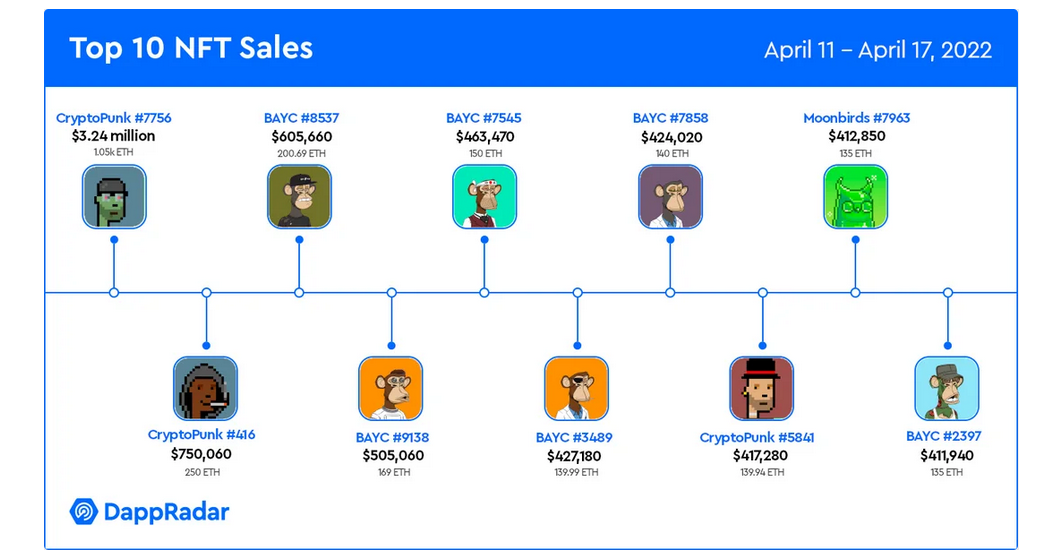 The Moonbirds project is following a similar route to the Bored Ape Yacht Club (BAYC) by launching utility-focused NFTs that grant holders access to a private ecosystem and membership club.

According to the project’s roadmap, hodler benefits will include priority access to future drops, a membership club, merchandise, and early access to an upcoming Metaverse platform named “Project Highrise.”

The Moonbirds NFT collection was founded by the PROOF Collective, which is working on several NFT projects and also acts as an exclusive social club for the 1,000 holders of the PROOF Collective NFTs. The collectible membership passes have an eye-watering floor price of 91 ETH ($278,800) at the time of writing.

So why did I invest 120 $ETH into @moonbirds_xyz which is now valued at roughly 300 $ETH based on last sales?

Why was this such an easy play for me and why am I not selling yet?

Moonbirds’ impressive launch appears to be a result of investors heavily backing the founding members of the PROOF Collective, which includes tech entrepreneur and Digg founder Kevin Rose along with web3 investors Justin Mezzell and Ryan Carson.

Related: How to get premium high-resolution metaverse and NFT images

An NFT collector who goes by “Cryptolocity” on Twitter highlighted Rose yesterday, noting that they backed the project due to his strong reputation, connections in the web2 and web3 worlds, along with his NFT focused podcast which has “contained some of the most life-changing ‘alpha'” for his listeners.

2/ First, the major reason why this project has seen such success is the people behind it all: Kevin Rose @kevinrose and his team Ryan Carson @ryancarson Justin Mezzell @JustinMezzell are very well known figure in the Web 2 and Web 3 world and are the ones spearheading it all