Stocks and cryptocurrencies saw a notable bounce on March 9 even though war, rising inflation and historically high oil prices have investors uncertain about the future. 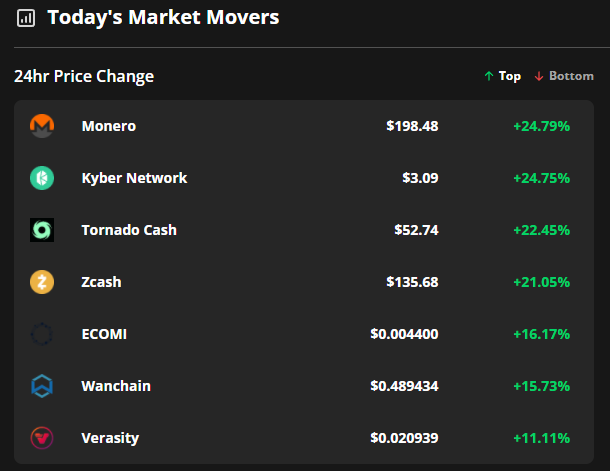 Data from Cointelegraph Markets Pro and TradingView shows that the biggest gainers over the past 24-hours were Monero (XMR), Kyber Network (KNC) and Tornado Cash (TORN), with Zcash (ZEC) earning an honorable mention.

Monero is one of the longest-running privacy-focused protocols in the cryptocurrency market and the project is popular among investors looking to make private, anonymous transactions.

The surging price of Monero comes as an increase in global regulatory concerns and sanctions may have pushed crypto users toward privacy-focused protocols to prevent their assets from being seized or frozen.

Kyber Network extended the hot streak it has been on since early 2022 after the multi-chain decentralized exchange (DEX) and aggregation platform saw its price surge 37% from a low of $2.33 on March 7 to a daily high at $3.19 on March 8 as its 24-hour trading volume spiked 222%.

VORTECS™ data from Cointelegraph Markets Pro began to detect a bullish outlook for KNC back on Jan. 22, prior to the recent price rise.

The momentum for KNC follows the release of Kyber 3.0 in late January and the protocol’s March 6 launch on Arbitrum, which promises to offer faster transaction times with lower fees.

Related: Kyber Network (KNC) bucks the market-wide downtrend with a 57% gain in January

Tornado cash is a decentralized, non-custodial protocol that provides private crypto transactions by breaking the on-chain link between source and destination addresses.

VORTECS™ data from Cointelegraph Markets Pro began to detect a bullish outlook for TORN on March 8, prior to the recent price rise.

As seen in the chart above, the VORTECS™ Score for TORN began to pick up on March 7 and hit a high of 87 on March 8, around one hour before the price increased 32.7% over the next day.

The climbing price of TORN follows the release of the protocol’s new decentralized relayers network which helps maintain privacy during the withdrawal process on the platform. Those interested in becoming part of the relayers network are required to stake a minimum of 300 TORN.