Mainstream media on the Merge: Risky move or climate nirvana?

Mainstream outlets are starting to pick up on the significance of next week’s Ethereum Merge, describing it as a “major overhaul” that could either accelerate crypto adoption or send disastrous shockwaves across the market should it fail.

The Merge has been in the making since the original Ethereum white paper and involves moving from an electricity-intensive proof-of-work (PoW) consensus mechanism to an efficient proof-of-stake (PoS) without any significant disruptions to the blockchain.

American business publication Forbes called the no-downtime upgrade akin to “[changing] the engine of a spaceship mid-flight,” and Swan Bitcoin CEO Cory Klippsten made a similar comment to the Wall Street Journal, stating the upgrade is like “trying to fix an airplane in mid-flight.”

Some outlets stressed the upgrade could be fraught with risk, sharing concerns that one wrong move could “prove disastrous” for the future of the network and the decentralized applications (DApps) on the Ethereum blockchain. 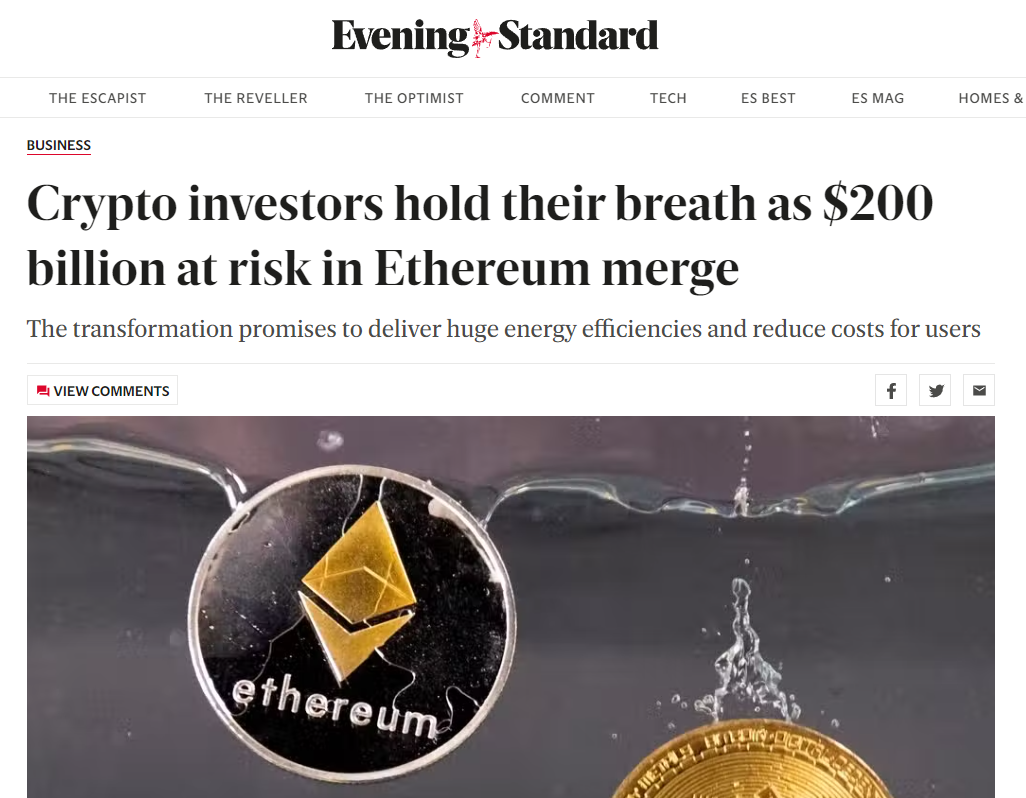 British newspaper the Evening Standard suggested crypto traders have been “holding their breath” ahead of the upcoming Merge, as a failed upgrade could put the entire cryptocurrency ecosystem “at risk.”

The Ethereum network is responsible for the majority of the $150 billion stablecoin market cap, and around $33 billion in total value locked by Ethereum-based decentralized applications (DApps), according to Defillama.

Dr. Anna Becker, CEO, and co-founder of EndoTech told the Standard that it will be “quite troublesome for the industry to survive” if something were to go wrong which leads to a halt of the blockchain.

“Ethereum is the infrastructure for many companies to manage their blockchains, so if something goes wrong we have the halt of the industry […] it will be quite troublesome for the industry to survive this period.”

The Washington Posts suggested that as the proof-of-stake mechanism is “less battle-tested” than proof-of-work, the security of whic has been proven over more than a decade, “new vulnerabilities could be found.”

Journalist John Quiggin from the Australian national broadcaster ABC added in his reporting that given that the new model has only been tested on “experimental blockchains,” there is a chance the Ethereum experiment “could fail,” – potentially if larger ETH stakers find a way to manipulate the system.

One point that has seen consensus among outlets is that the Ethereum upgrade will make the blockchain vastly more environmentally friendly than before – reducing energy consumption by more than 99% according to the Ethereum Foundation.

Some argue that this could place pressure on other proof-of-work cryptocurrencies such as Bitcoin to eventually follow suit.

“At a time when the world is desperately trying to reduce energy consumption, Bitcoin uses more energy each year than medium-sized nations such as Argentina,” said Quiggin, adding:

“If the Ethereum switch succeeds, Bitcoin and other cryptocurrencies will be under immense pressure to deal with this problem.”

Quiggin noted that last year, electric car manufacturer Tesla announced it will no longer be accepting Bitcoin for payments until at least half of the cryptocurrency is mined using renewable energy, while the New York Legislature passed a bill earlier this year to scrutinize Bitcoin miners using carbon-based power.

“One thing is clear: as the need to slash global emissions becomes ever more pressing, cryptocurrencies will run out of excuses for their egregious energy use,” he concluded.

Baby Doge price has been a bit volatile in the past few days as investors buy the coin's dip. The token surged to a high...
Lees meer
Laad meer