The daily transactions involving the richest Litecoin (LTC) addresses – “whales” that hold 10,000 to 1 million LTC – have jumped to their highest levels since December 2021.

On-chain analytics platform Santiment detected a total of 3,458 LTC transactions worth over $100,000 on April 5, calling it “an indicator of mid-term price direction shifts.”

Meanwhile, Litecoin’s price continued its correction move on April 6, down 13% from recent highs of $135 on March 30. 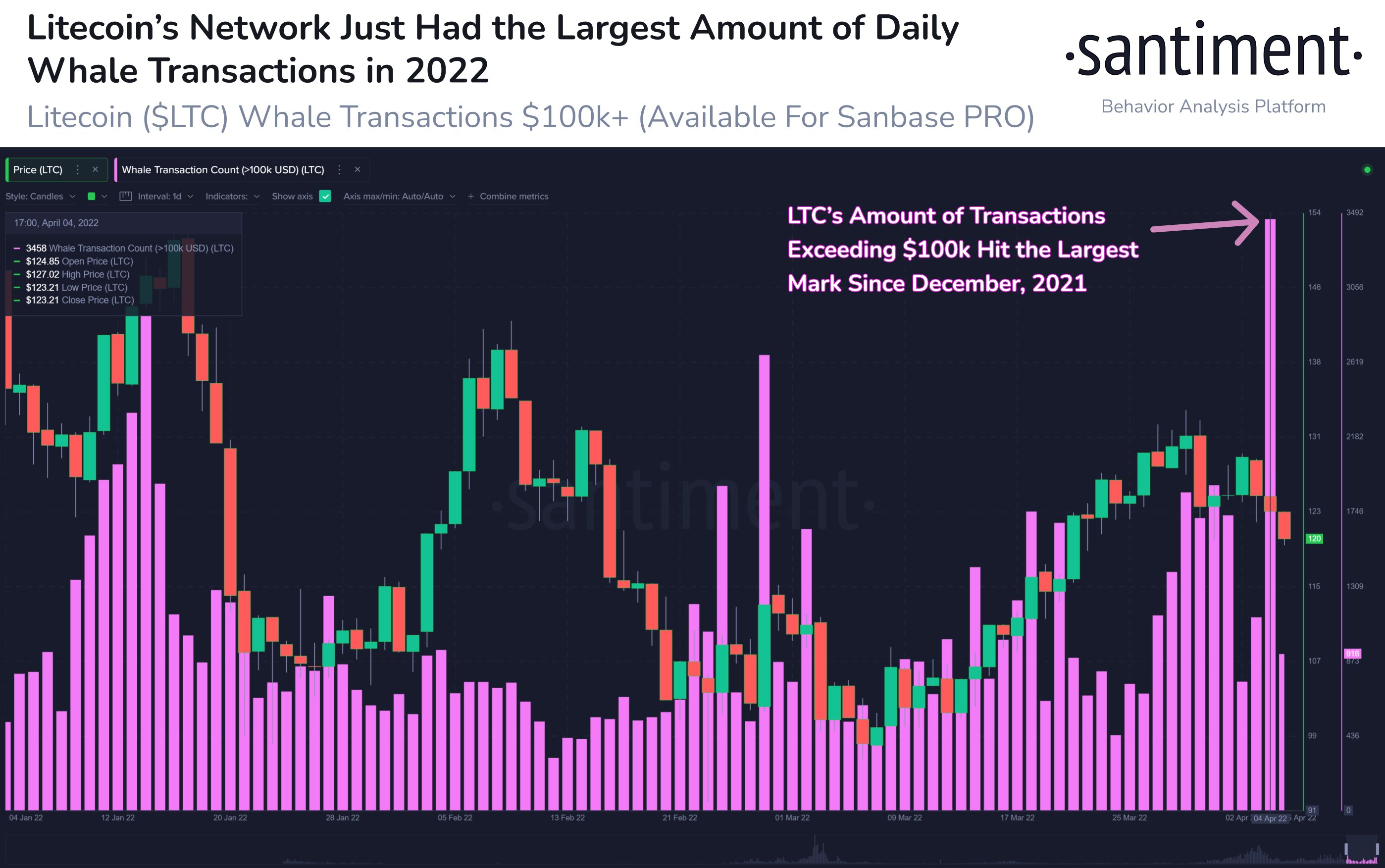 Whales are an influential cluster of investors since they hold a comparatively large amount of coins, whose movements can intentionally or unintentionally move markets in either direction.

Santiment’s chart revealed little about whether Litecoin whales purchased, sold, or merely transferred their LTC holdings to other addresses. However, it showed that spikes in daily whale transactions have been preceding price declines in the Litecoin market this year, raising the possibility of LTC’s price falling in the coming weeks.

LTC’s price declined by nearly 7.5% week-to-date to drop below $120. Its path of least resistance looks skewed toward the downside, with its 200-week simple moving average (200-week SMA; the orange wave) near $100 acting as the next pullback target – around 20% below current prices.

Related: Crypto billionaires increase by 60% in a year: Who made Forbes annual list?

The given level also coincides with the lower horizontal support that constitutes a descending triangle pattern, raising LTC’s chances of a rebound here toward the channel’s upper falling resistance above $200 in Q2.

Additionally, the monthly position change of Litecoin’s long-term investors – or “hodlers” – shows LTC accumulation (green) during its price declines in 2021, suggesting that investors are currently betting on the price to rise in the future.

Meanwhile, Rekt Capital, an independent market analyst, expects an early rebound in LTC/USD, citing a “falling wedge” – a bullish reversal pattern that starts wide at the top but contracts as prices move lower.

“LTC now pulling back for a post-breakout retest of the Falling Wedge top,” he noted in reference to the chart above, adding:

“This Falling Wedge diagonal is confluent with the green Range Low area ($116-$125). LTC will be looking to hammer out a base in this area.”