Terra Classic (LUNC) has outperformed all top-ranking cryptocurrencies so far in September gaining nearly 100% in the past seven days alone.

The profits in the Terra Classic market appeared despite its association with the defunct Terra (LUNA) token, a $40 billion project that collapsed in May. Terra Classic is a rebranded version of the same Terra project and thus has been the subject of skepticism from analysts and investors since its debut.

But traders have ignored such warnings in recent weeks, with a flurry of fundamental catalysts influencing them to purchase LUNC.

A new staking service went live on the Terra Classic chain on Aug. 27, serving as the first major cue behind the ongoing LUNC price rally.

According to LuncStaking_Bot, users have staked more than 610 billion LUNC tokens with Terra Classic against its net supply of 6.9 trillion units. In other words, nearly 9% of the total LUNC supply has been removed from circulation.

Supply and staking of LUNC

Data from StakingRewards show that staking Terra Classic is returning users with an annualized yield of 37.8%, among the highest payout in the crypto industry.

The higher returns could have played a key role in boosting LUNC demand, prompting the token’s price to rise by more than 450% since the staking service launch, as shown in the chart below. 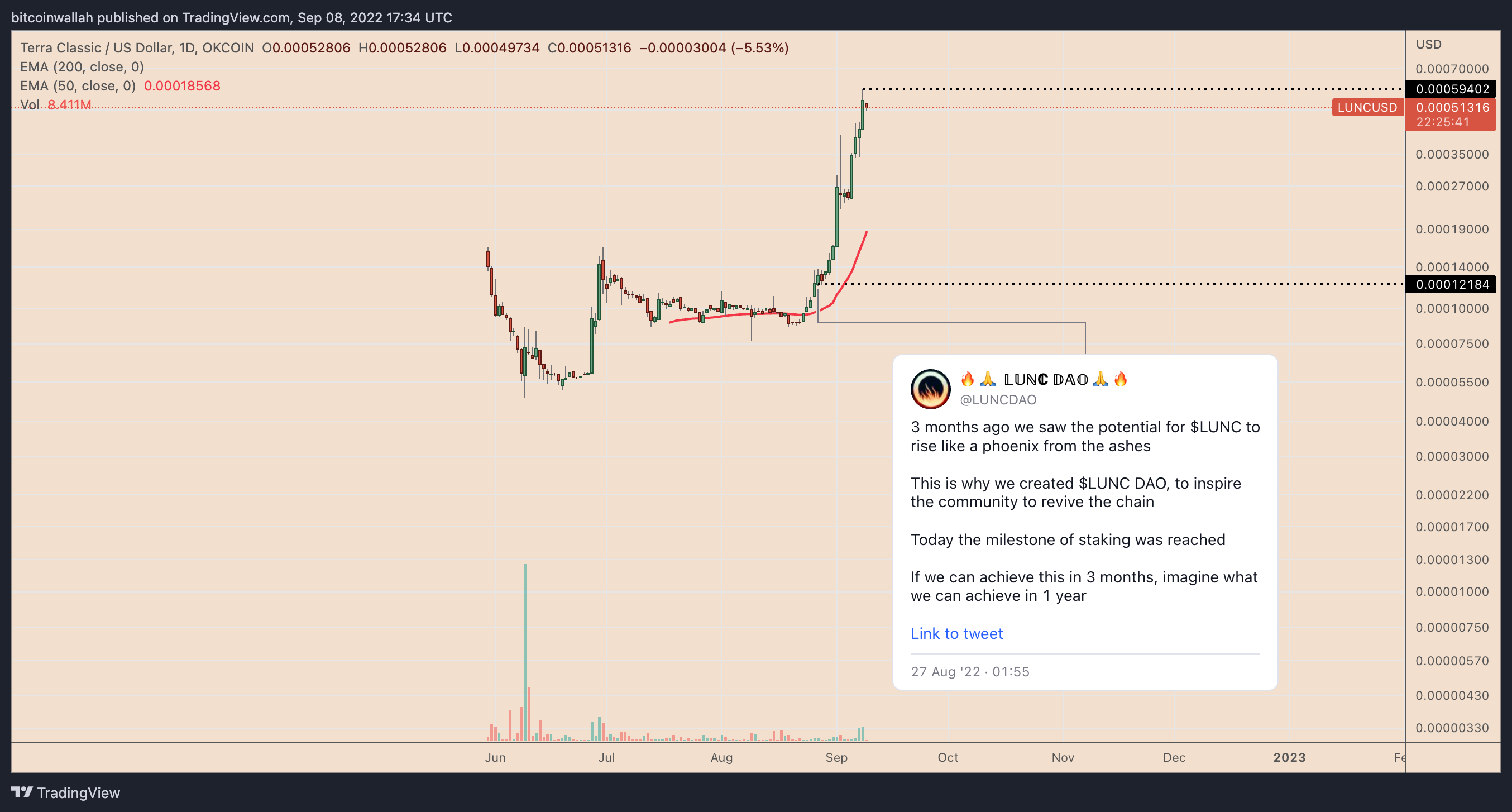 Terra Classic’s community member Edward Kim proposed to impose a 1.2% transaction tax on LUNC on-chain transactions at the beginning of September. The proceedings made from this tax would eventually end up in a dead address, thereby permanently removing a portion of LUNC’s supply from circulation.

Terra Luna Classic (#LUNC) skyrockets >37,000% since its bottom after the Terra collapse

This comes after a proposal to implement a 1.2% token burn tax on all transactions that will enable $LUNC to become a deflationary cryptocurrency.#LUNC ✨ #HaileyLUNC ✨ $LUNC ✨ pic.twitter.com/oIxI7tqVkW

Interestingly, there’s already a LUNC burning mechanism in place that has permanently removed over 3.6 billion tokens out of circulation, according to LUNC Burner.

Nonetheless, certain technical indicators show that LUNC’s price rally is at risk of correcting in the near term. These include its daily relative strength index (RSI), which crossed 90 on Sep. 8, an extremely overbought level that’s typically followed by a price correction.

Also, the recent LUNC gains are accompanied by lower volumes, suggesting traders are unconvinced about the price rally’s longevity.

New York, New York, 3rd October, 2022, Chainwire A collective of Jewish creators have teamed up to launch an NFT project that will raise funds for...
Lees meer
Crypto news English

What remains in the NFT market now that the dust has settled?

Over the last two years, nonfungible tokens (NFTs) have emerged as one of the most active and noticeable aspects of Web3. The data stored on blockchains...
Lees meer
Crypto news English

American socialite Kim Kardashian will pay $1.26 million in penalties for her involvement in the promotion of a cryptocurrency scheme called EthereumMax (EMAX). The United States...
Lees meer
Laad meer