In Part 1, we detailed three of the different kinds of crypto OGs you might meet at an industry party.

They were: (1) shadowy super coders and/or anon founders, (2) “reputable” and respected OG industry leaders like Vitalik Buterin and Brian Armstrong, and (3) the comeback OGs, who were trying to shake off the stink of a failed project.

This time around, we meet even more categories of crypto OGs, with insight from the insiders most familiar with them. 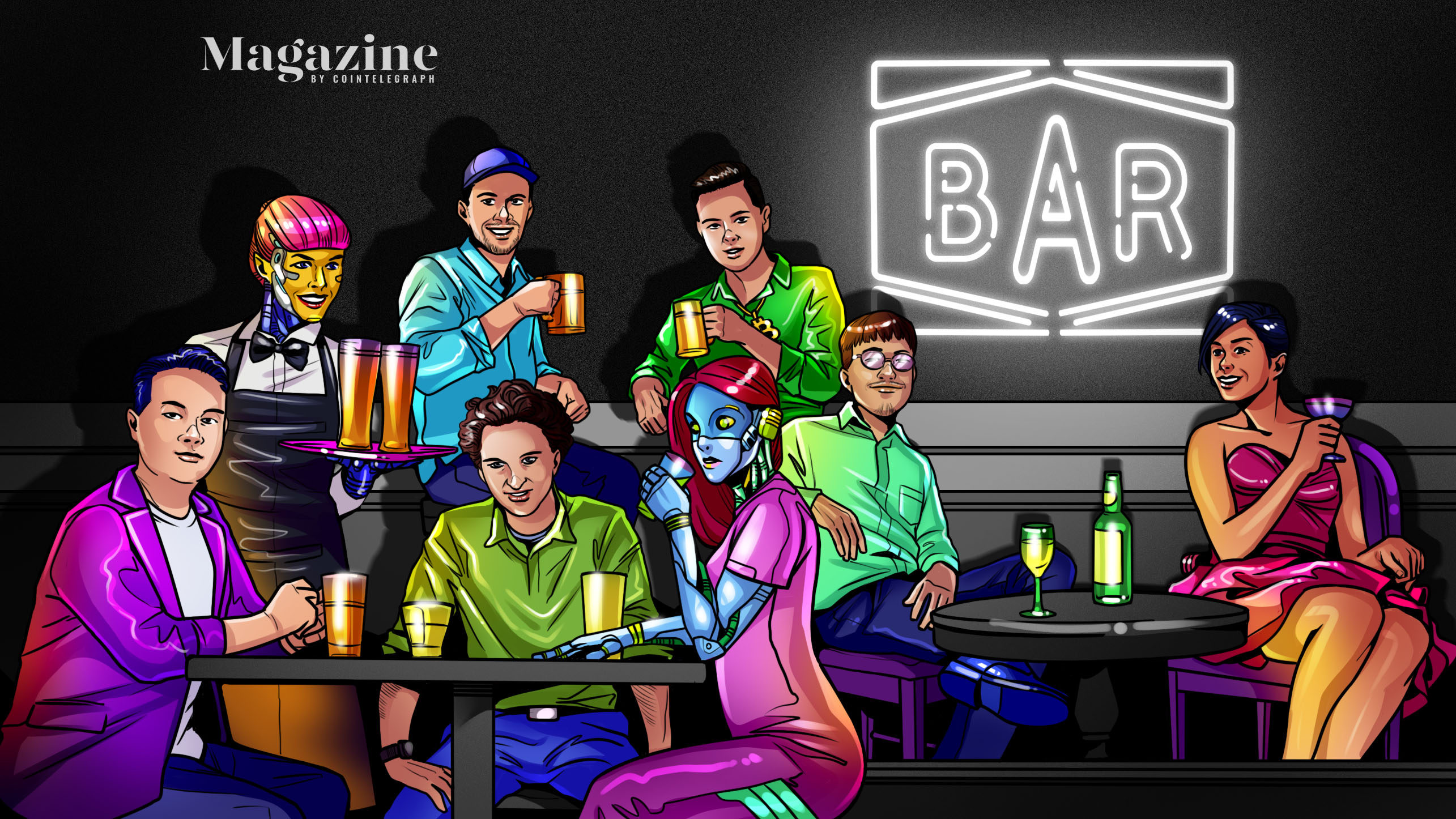 Here’s your guide to the Crypto OGs you’d meet … if you could wangle an invite to one of these parties.

4. The “NeoGs” market makers and traders

There are a select few crypto players who joined the game late, yet they rose to prominence to become behemoths in terms of net worth and impact. Usually, these are savvy market makers and traders who are often mistaken for OGs.

Take, for example, Sam Bankman-Fried, the founder of FTX trading exchange and quant trading firm Alameda Research. Amid the recent crypto collapses, he gained even greater prominence as he stepped in big to provide bailouts and minimize the contagions.

Noobs may mistake SBF as an OG, but he only joined the industry in 2017. Bankman-Fried made his wealth from arbitrage crypto trading, which he leveraged to build his empire.

The 30-year-old is a self-made billionaire who is a regular in legacy financial media, invited to speak at all the top crypto conferences, and one of the default industry representatives weighing in on U.S. congressional hearings. His wardrobe seems to consist exclusively of FTX T-shirts.

SBF has famously stated that he does not necessarily believe in the future of any cryptocurrency, yet he sees them as attractive opportunities. Bottomline, he is the type who is in it “for the money” (but only for the purposes of altruistic donation at some later stage).

“I don’t think you can call those who joined in 2017 an OG,” says Darius Sit, founder of successful Singapore-based crypto trading firm QCP Capital, which he also founded that year.

“That’s my definition anyway. I think OGs are hard core believers who went all-in when nobody else was paying attention to the space, so that’s certainly way before 2017.”

Like SBF, Sit was also in crypto primarily to make money, and since its founding, QCP Capital has become one of the world’s larger crypto option trading firms with $1.5 billion in assets deployed back in 2021. Its

venture arm was an early investor in many prominent projects, such as Deribit, dYdX, Algorand, Tokocrypto and Nansen.

Judging from their successes, and the fact that the top three highest net worth in the cryptocurrency industry currently come from market-making businesses, one may wonder whether the winners in the industry are the savvier opportunists, instead of the holding believers.

Sit insists that market making is also a concrete use case and innovation of blockchain, instead of merely a money-making endeavor.

“I think Sam and I shared – and probably still share – very similar views, and maybe I can provide some nuance here. Many crypto or blockchain initiatives promise incredible things that may or may not happen. But what is very real to me and what I believe in is the crypto capital markets.”

“To some extent, this is nothing new,” he continues. “It is the same market structures and practices with a different underlying: crypto assets. At the same time, it is also completely different.”

“Crypto is not attached to any particular country or authority; it is a non-aligned asset class that is accessible to anyone from any jurisdiction. It is the only scalable financial ecosystem that is independent.”

He adds: “In a world where geopolitics has become increasingly unstable, I think that counts for something. I enjoy being part of this developing market.”

In the wake of this year’s macro sell-off and the liquidation of many Singapore-based whale trading firms and exchanges like Three Arrows Capital that sent shocks across the cryptocurrency market globally, QCP Capital has held its ground.

“We were always wary of the leverage and rehypothecation in the borrowing and lending markets, and so, we never participated in a big way. I did feel quite stupid at times, especially when folks around us were making billions from the balance sheet expansion and easy leverage. In the end, the choice to just focus on trading and developing the derivatives markets might not have been the most profitable, but it was the right one,” Sit comments.

At any networking party, you can find Sit having a quiet conversation outside with a couple of other people. “I don’t like crowds and prefer deep, quality conversations,” he says.

5. The flashy influencers and YOLO bros

Last but not least, influencers are the OGs most likely to throw a networking party in the first place, in order to convert normies into crypto investors.

Even the letters “OG” conjure up images of swaggering, bling-bling-studded social media shiller types, wearing loud Bitcoin paraphernalia (cue The Bitcoin Man), driving lambos and popping champagne in the clubs, or otherwise chilling on a yacht somewhere in the Bahamas.

Often derided, they’ve played a critical role in painting a dream of what is possible when one jumps onto the bandwagon of a deflationary asset class. They’ve all made life-changing amounts of money early from cryptocurrency due to astute intuition or dumb luck, and they want the whole world to know about it.

Whether buying flashy Lambos or super yachts or setting up a commune on a tropical island, these people are passionate about enjoying life to the fullest. They tend to be attractive and inspirational with larger-than-life personalities, making them suitable as event promoters, marketers, content creators and social media influencers. For better or worse, they are the face of the crypto industry in the mainstream.

“I think people like me, like Kyle Chasse, are doing the hard work daily of preaching the gospel of Bitcoin to the masses,” explains The Bitcoin Man – aka Herbert Sim, a social media influencer with hundreds of thousands of followers on Instagram and Twitter.

An easily recognizable regular at conferences, Sim wears a Bitcoin necklace everywhere he goes and regularly posts on his social media about the virtue of investing in cryptocurrency.

“I am very public about my identity because I have never done anything shady in the past. Plus, I am only shilling Bitcoin, and I 100% believe that it is safe and advisable for everyone to invest in Bitcoin.”

“Back in the days, I remembered a bunch of us would be partying hard at a club, and we would flaunt to everyone that we got rich from Bitcoin. We would hire girls with big boobs wearing tiny T-shirts with Bitcoin logos to drink among us in the club,” Sim recalls fondly.

The best of blockchain, every Tuesday

Subscribe for thoughtful explorations and leisurely reads from Magazine.

Sim got into cryptocurrency during his college years at Oklahoma City University in the United States. He was helping out a professor researching blockchain and got deep into the cypherpunk movement. “This was as early as 2009 and 2010. In 2010, someone I can’t disclose gave me some funding – around 100 grand – to host CryptoChainUniversity, one the world’s oldest academic repositories for research and education of crypto and blockchain.”

“The definition of OG is rather fluid, but I would say that the latest deadline for OGs to enter cryptocurrency should be around 2014,” said Sim.

He has since worked in many different capacities in the industry, for example as the global operations director of Huobi Exchange and as the chief marketing officer of Cryptology. He also founded a U.K.-based venture capital fund trademarked “The Bitcoin Man.” In his free time, he likes to draw illustrations and write fantasy short stories inspired by the crypto industry.

“People like us, we are the life of the party; we are not jaded at all with the industry,” chips in Harry Horsfall, CEO of Zebu Digital – a Web3 launchpad accelerator and marketing agency based in London, United Kingdom.

Horsfall bought his first Bitcoin in 2011 and went all in around 2013. “I am not a whale, and I am certainly not Lambo rich. I have lost my crypto throughout history, but the most important thing is to get back on it and to keep believing in the future!” gushes Horsfall enthusiastically.

Before crypto, Horsfall used to run music festivals, and now he organizes a lot of Web3 parties, for example, Zebu Life, Defi Life, Avalanche Summit, Ethereum Collective, Hijack Collective and so on.

“The thing about crypto parties is… they are not that great because they are predominantly male. So, we used to hire girls all the time. Now things are changing, and we are happy to see more and more girls coming into the ratio of 50:50.”

This guide is a rough sketch of the different types of OGs based on their roles and characteristics in the industry. But many OGs may straddle a few different categories, and others defy easy categorization.

Victoria feeding a Bitcoin ATM machine with a $50 note back in 2014.
Source: Victoria Au

“No, an OG would be a person who originated the technology or utilized the technology in creating new business opportunities that addressed key pain points previously ignored or unbeknownst. I wouldn’t consider myself an OG, but an early casual believer-adopter, as I invested $50 SGD into Bitcoin back in 2014. To this date, this has become my best performing investment,” says Victoria Au, now a business director at fractionalized real estate investing platform RealVantage.

Zing Yang, who first bought crypto in 2014 and became one of the board directors of Litecoin, has an identity crisis around this label.

“I think I am an OG from timeline and participation, though, by my definition, I feel like an imposter, as I am not techy enough or part of the developer community who got in early since the 2009 days because of ideological reasons or enamorment with the tech,” she says.

Yang has now switched careers completely to join a global food production conglomerate Cargill, where she feels like she can make a more concrete contribution with her talent and skills.

“Being an OG is not all kittens and rainbows,” says Marcus Eng, a rare former child OG, who got into cryptocurrency 11 years ago when he was just 14. “I stumbled into crypto in a Bitcoin talk forum. And I have had my fair share of adventures since then. I was also an early Dogecoin OG.”

Now 25 years old and working as an investment lead for QCP Capital, Eng thinks that he has finally started making concrete contributions to the industry.

“When I was 14, I was so young. I was just fooling around. I was a rebel, and I got in for crypto idealism. I also could not manage my fortunes well and lost a lot of it throughout the years. Now I am much more discerning and critical towards the industry and able to help others navigate this space.”

Being rich overnight so early also brought him some mental health issues. “For a while, I was depressed because I lost motivation to do anything else in life besides for my own amusement,” he says.

In conclusion, OG should simply mean anyone who has believed in the vision of blockchain since its early days, made contributions to the industry, and adopted and invested significantly in cryptocurrencies since 2014 latest.

“Bear in mind though, there’s always someone who is going to be ‘more OG’ than you in so many different ways. It is not binary – it is a spectrum,” adds Yang.

Check out Part 1 of our Guide to Real Life Crypto OG’s below.

Voyager Digital filed for Chapter 11 bankruptcy in July after its exposure to the toxic Three Arrows Capital led to its ultimate downfall. This week,...
Lees meer
Laad meer