Game on: Yield Guild Games scholarships on the rise through Q1

The Community Report shows that the month-on-month growth of scholarships in YGG has been strong despite a downturn in the market. January saw 50.13% growth, February saw a 28.8% increase, while March had 41.93% growth fueled by new partnerships and the rollout of SubDAOs. By the end of March, the guild had 29,458 scholarships, mostly from Axie Infinity. 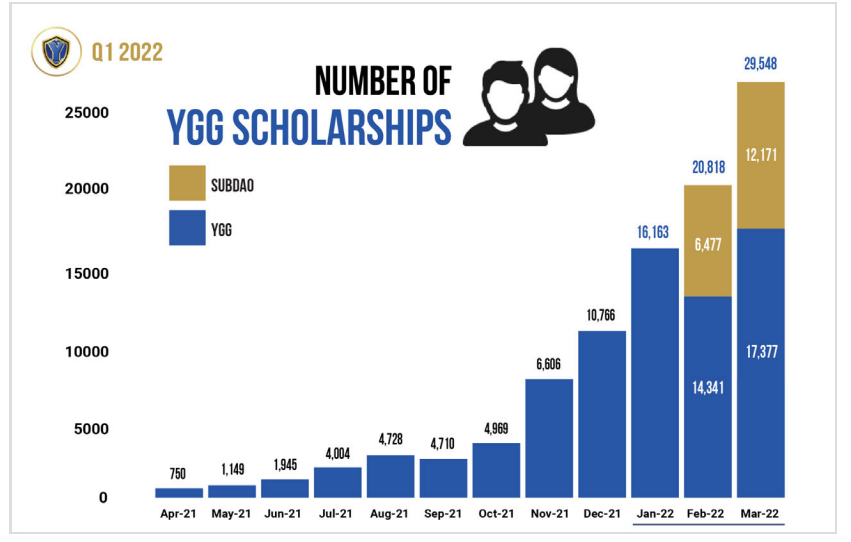 The number of scholarships at YGG increased every month in Q1.

YGG is a gaming guild that pools together gamers from across the play-to-earn (P2E) space in order to generate revenue for the community and teach newcomers how to be successful through a scholarship program. The guild generates revenue from staked YGG tokens and scholarships. Nonfungible token (NFT) game Axie Infinity accounts for the majority of scholarships across all of YGG’s 12 partner games.

To date, the guild has farmed 195 million SLP worth about $1.1 million at the time of writing, according to CoinGecko. SLP is a token used to breed Axies, which is one of the major activities for scholars. The report states that with 25.86 million SLP farmed, February was the most profitable month since it began last April.

Prices across the crypto markets have been down through 2022, as illustrated by the 44% drop in market cap since Jan. 1. However, blockchain gamers have not put down their controllers. Data from decentralized application (DApp) tracker DappRadar shows that user numbers have remained fairly stable at about 1.1 million daily gamers since the beginning of the year.

Yield Guild Games spent $2.5 million on new partnerships through Q1. 63% of those funds went to P2E game partnerships, while 23% went to guild partnerships. The remaining 14% went to infrastructure and platform support to expand the P2E ecosystem.

The future of NFT gaming looks promising based on the growth rate of YGG and the amount of funding going toward new game development. Since April 25, nearly $400 million has gone to fund early-stage NFT games, according to data from investment tracker Airtable.