From beer to Bitcoin as legal tender: a BTC education in Roatán

Few crypto enthusiasts around the world could point to the remote island of Roatán prior to the Bitcoin (BTC) 2022 conference in Miami.

Dušan Matuska was one of them, a Bitcoin educator whose plans to open a Bitcoin education center in a former brewery entangled with the Satoshi Nakamoto-inspired vision of a special economic zone in Honduras called Próspera. Located on Roatán, Próspera accepts Bitcoin as a de facto legal tender as of April 2022.

But, how did a Slovakian Bitcoin miner stumble across one of the few locations worldwide to accept Bitcoin as de facto legal tender? And, what does a brewery have to do with it? 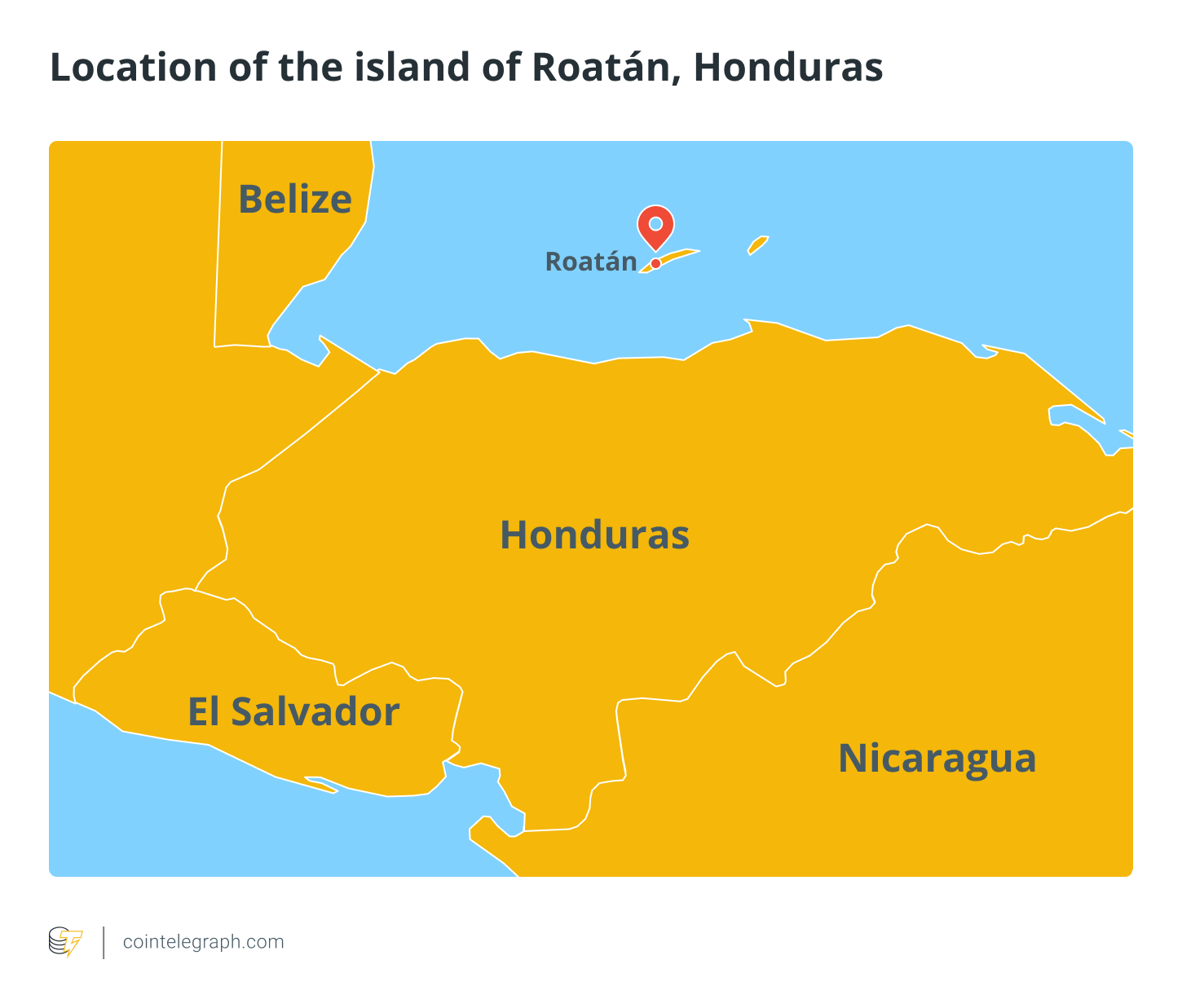 In late 2021, Matuska’s Bitcoin mining friends mentioned the Honduran isle of Roatan, explaining their intention to buy a few plots of land on the picture-perfect island. Given the success of neighboring country El Salvador and the Bitcoin Beach Bitcoin adoption story, as well as his personal mission to teach 100 million people about Bitcoin by 2030, Matuska’s curiosity was piqued.

Matuska flew over from Paraguay, where he was investigating renewable Bitcoin mining operations, and quickly learned Roatán is a “nice small island in Honduras” that has “beautiful views.” It’s like a “hidden pearl of the Caribbean.”

However, it’s small, so “after two weeks having a holiday there, you start to get bored.”

“Since our mission is always to educate people about Bitcoin, we began cooking up ideas about a Bitcoin education center in Honduras.”

In line with other Bitcoin grassroots projects around the world such as El Salvador and Portland, Oregon, while drawing from his own experience educating people about Bitcoin at crypto cafés in Eastern Europe, Matuska began scoping out centers for Bitcoin education.

A curious coincidence, Matuska is Slovakian – Czechs and Slovakians are close and share similar culture and histories – and Czech is the second-largest expat population on the island after the Americans. What’s more, an old Czech brewery had fallen into disarray.

The former Czech brewery appeared to be the ideal opportunity to rejuvenate a tired space and convert it into a place where visitors could learn about the world’s largest cryptocurrency. “It looked like a Bitcoin Citadel,” Matuska told Cointelegraph.

The beers to Bitcoin story had begun.

However, the size and scale of restoring a large and derelict brewery into an education center were daunting. When Matuska and the team “checked it out, the building was rotten and damaged.” Restoring the relic would cost “maybe hundreds of thousands of euros to put back to a normal state.”

In another happy accident, the Próspera business event was taking place on the island, just around the corner. Próspera is a special economic zone in the center of Roátan that hosts its own civil law and regulatory structure. Próspera’s laws take inspiration from the hugely successful Shenzen economic zone in China, as well as Dubai.

Matuska left the brewery to take part in the conference buoyed by conversations he had about Honduras potentially adopting Bitcoin as legal tender. He explained that in Roatán in early 2022:

“You could pay some taxes in Bitcoin; businesses were super open to accepting Bitcoin, or any other currency, because there is a huge amount of freedom in the whole area.”

During the conference, a golden opportunity presented itself: Matuska was asked to discuss his work with Bitcoin and education.

“I was thinking, okay, should I present the potential Honduras Bitcoin Education Center? Like, Is it okay or not? In the end, I decided I should.”

Shortly after the presentation about the brewery to Bitcoin project, Erick Brimen, founder and CEO of the Próspera special economic zone, turned to Matuska. “Come with me,” he said.

“Erick Brimen took me to a building at the highest viewpoint on Roatán in Pristine Bay. It’s an amazing building. Right now, there’s a school but it’s outgrown the building. In June, it’s going to be free. And. it’s going to be where we start building the center.”

Forget the derelict brewery, an even better Bitcoin education center had fallen into Matuska’s lap. Moreover, Matuska got the nod from the CEO of the organization that was the driving force for Bitcoin as legal tender in Próspera.

Visited Roatan island in Honduras last week to find a place for our future Bitcoin Education Center. We were offered this wonderful building in @Prosperahn to start in one of the most #Bitcoin friendly jurisdictions pic.twitter.com/6zrWpXAzJf

Brimen explained to Cointelegraph that the Bitcoin education center in Próspera aligns with their key strategic objectives of identifying “100 cocreators that will be ‘hands on’ in activating a string of strategic projects.”

“Dusan’s project is one of them, he’s co-creating something important to the jurisdiction by installing a Bitcoin education center. Decentralized finance is key and Bitcoin is a much better form of currency than traditional fiat. We want to enable that.”

Upon seeing the new building and the scale of the project, Matuska’s brain went into overdrive. He needed to talk to his girlfriend, his colleagues, immigration authorities and airlines as they had just “a couple of weeks or months just to set it up and start to put everything together.”

Matuska told Cointelegraph that the Próspera project was keen to do “everything on Bitcoin.” A deal was struck just weeks before Bitcoin 2022.

During Samson Mow’s keynote speech at Bitcoin 2022, Bitcoin as a de facto legal tender was announced in Próspera, Honduras and Madeira, Portugal, while a Mexican senator shared ambitious Bitcoin plans for her country.

The announcement made during Bitcoin 2022 in Miami. Source: YouTube

Matuska jokes that Bremen almost mentioned the Bitcoin education center during the keynote speech, but the time constraints of just “90 seconds on stage” didn’t quite allow for it.

Back in Honduras, the Bitcoin education center is growing in importance as part of Próspera’s and Brimen’s vision for Bitcoin. Ultimately, Bitcoin should be understood and used correctly.

The view from the top of the Bitcoin education center in Próspera. Source: Matuska

Brimen told Cointelegraph that “it is not enough to simply make it legal,” as people should “have the tools available to them as well as the knowledge to use it optimally.” He continued:

“Since it is considered legal tender, we want to enable people to not just have the right to use it but to use it responsibly.”

Related: Building businesses in the ‘spirit of Bitcoin’: The Bitcoin Hostel

As a result, Matuska is keen for Bitcoiners around the world to visit, reach out and be part of the change occurring in Honduras.

“Próspera actually asked us to be the leaders in terms of onboarding businesses in Honduras, helping them out and setting everything up. For us, it’s a huge leap toward our vision of accelerating Bitcoinization. And, that’s why I just couldn’t say no.”

“Lecturers from Czechia and Slovakia are flying out to teach,” but the team is still thin on the ground. As Brimen concludes, “to use Bitcoin to the maximum benefit possible,” they are going to need all the help they can get.

As for the former brewery that’s fallen into disrepair, Matuska told Cointelegraph that “maybe” in the future, there will be a Bitcoin-related project taking place there. It’d be a shame to let such a beautiful building go to waste.