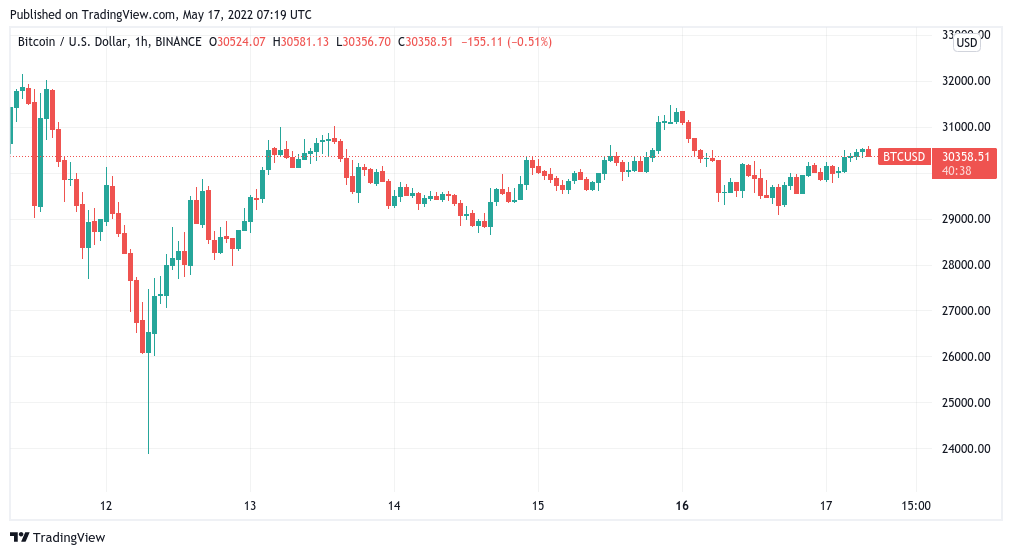 Data from Cointelegraph Markets Pro and TradingView showed BTC/USD climbing after the daily close to tentatively build on $30,000.

Still, in a multi-day range, the pair was yet to decide on a meaningful upward or downward trajectory, while volatility ebbed into the new week.

Amid concerns that a major retracement could take it below last week’s ten-month lows, popular analyst Credible Crypto offered a more optimistic alternative. Based on historical norms, he argued on Twitter, thatBitcoin had little impetus to retest $20,000 or lower.

“The argument for 13K-14K $BTC on the premise that past major bear markets have led to 80% declines from the top makes a major assumption- that 65k was the cycle top,” he wrote.

As Cointelegraph recently reported, contingency plans appear to be in place already for such an event, with MicroStrategy – the company with the largest corporate BTC treasury – even prepared to buy up supply to stem the fall.

“Not expecting that. Is it possible? Yes, but as I’ve said previously a retest of prior cycle highs has never happened before- so I find it highly unlikely,” he responded.

For Cointelegraph contributor Michaël van de Poppe, it was a question of the United States dollar cooling its bull run versus other fiat currencies in order to give risk assets some breathing space.

The U.S. dollar index (DXY), he forecasted, should come down from its twenty-year highs of 105 points.

“If I look at the current state of the $DXY, I think we’ll follow through with this scenario. Assuming we’ll be seeing some corrective move, the highs have been swept for liquidity. Losing 103.7 points and I think we’ll get more downwards pressure here -> risk-on assets up,” he tweeted on May 16.

Market sentiment data meanwhile reflected the majority consensus across crypto – that anything could now happen, with bias firmly skewed to the downside.

The Crypto Fear & Greed Index, a cross-market sentiment gauge, hit 8/100 on May 17, its lowest value since March 28, 2020 – two weeks after the Coronavirus lockdown-induced meltdown.

How low can Ethereum price drop versus Bitcoin amid the DeFi contagion?

Ethereum's native token Ether (ETH) has declined by more than 35% against Bitcoin (BTC) since December 2021 with a potential to decline further in the...
Lees meer
Crypto news English

6 Questions for Daniel Yan of Matrixport

We ask the buidlers in the blockchain and cryptocurrency sector for their thoughts on the industry… and throw in a few random zingers to keep...
Lees meer
Crypto news English

Ever since early Bitcoin (BTC) investors woke up millionaires as the ecosystem gained tremendous popularity alongside the mainstreaming of the internet, investors across the globe...
Lees meer
Crypto news English

Yuga Labs has finally broken its silence over the conspiracy theory that alleges the team embedded alt-right and Nazi memes/imagery into the artwork and branding...
Lees meer
Laad meer