Ethereum price technicals hint at 35% gains versus Bitcoin in 2023

Ethereum’s native token, Ether (ETH), could grow by 35% versus Bitcoin (BTC) this year to hit 0.1 BTC for the first time since 2018 as it forms a classic bullish continuation pattern.

Dubbed an ascending triangle, the pattern forms when the price fluctuates inside a range defined by rising trendline support and horizontal trendline resistance. It typically resolves after the price breaks out in the direction of its previous trend.

On a weekly chart, the ETH/BTC pair has been painting an ascending pattern since May 2021. The Ethereum token eyes a breakout above the pattern’s horizontal trendline resistance near 0.0776 BTC. Breaking this level could then see the price rally by as much as the triangle’s maximum height.

In other words, the ETH/BTC pair could reach the next big resistance level at 0.1 BTC in 2023, or 35% from the current price levels. 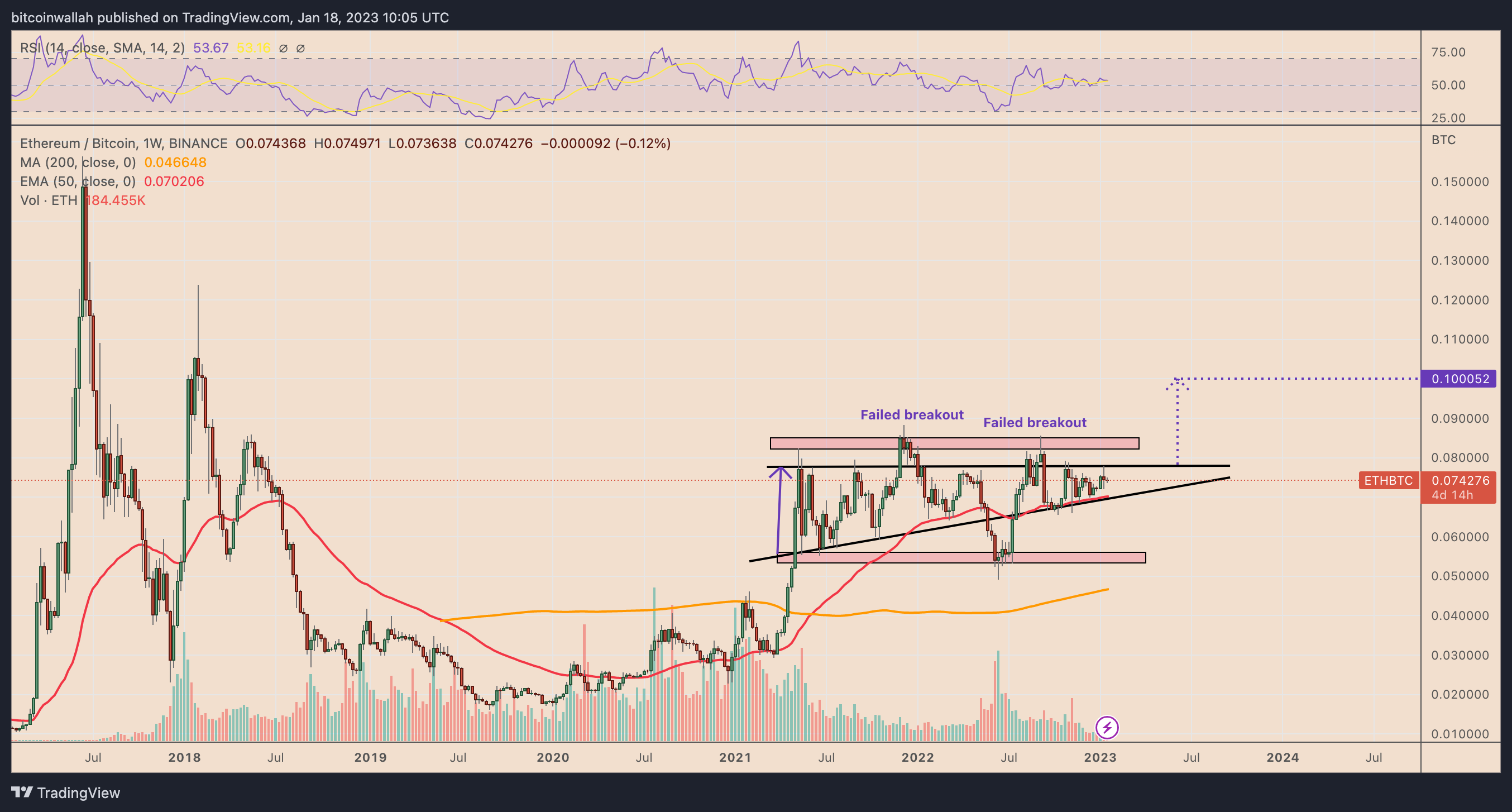 Nonetheless, it is important to mention that ETH/BTC has attempted to break above the triangle’s resistance trendline eight times since May 2021. The attempts included two major  breakouts in November 2021 and September 2022, which saw the pair rallying 14% and 9%, respectively.

Such a move would risk crashing ETH toward the triangle support, which coincides with its 50-week exponential moving average (50-week EMA), represented by the red line in the chart above, near 0.070 BTC, down nearly 6% from the current price levels.

Ether’s bullish setup versus Bitcoin appears as ETH dominance has doubled versus other crypto assets in the past few years.

Notably, ETH’s market capitalization has risen to nearly 20.5% of the entire crypto market valuation in January 2023, from about 10% in December 2020, when the Ethereum network started its transition from proof-of-work (PoW) to proof-of-stake (PoS) with the launch of a dedicated staking smart contract.

Becoming a PoS blockchain has brought two key changes to Ethereum’s economy. First, users temporarily lock away a portion of their Ether holdings into Ethereum’s PoS smart contract to earn yield. And second, the Ethereum network has started burning some transaction fees.

Both changes have had a deflationary impact on overall supply. As a result, the Ethereum network now regularly produces fewer Ether tokens than are taken out of circulation, which theoretically makes ETH a “deflationary” asset.

The ETH/BTC price has grown nearly 250% since December 2020 despite still being down roughly 50% from its all-time highs witnessed in 2017.