Choppy market conditions dominated the cryptocurrency landscape on March 3 as the global economy continues to face challenges on multiple fronts and uncertainty about the future weighs heavily on asset prices.

Data from Cointelegraph Markets Pro and TradingView shows that the gains made by Ether (ETH) on March 2 were nullified in trading on March 3 as the price drifted from March 2’s high of $3,044 to a daily low of $2,784, reflecting an overall decline of 8.5%. 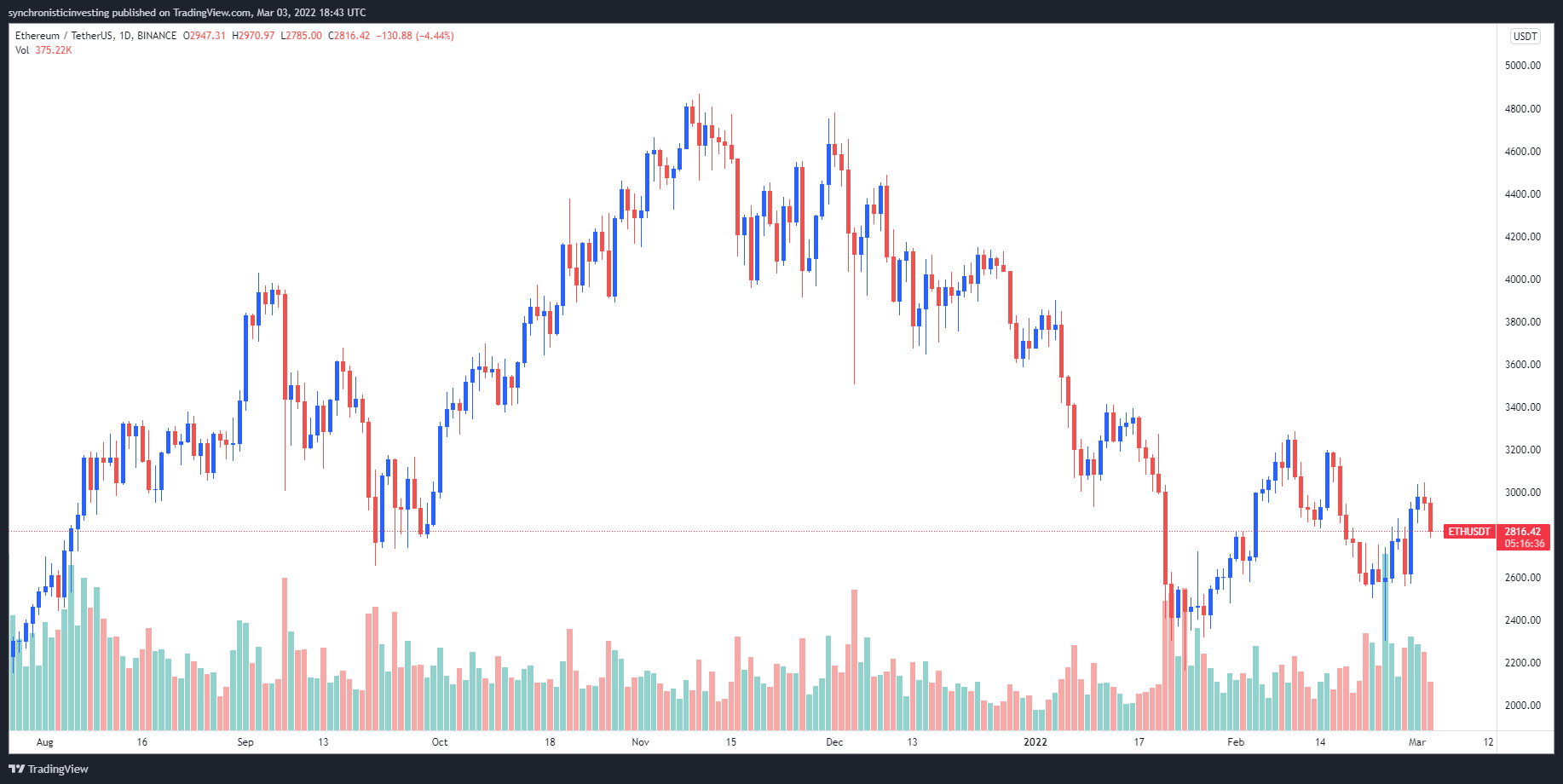 Here’s what several analysts in the crypto market are saying about what could be in store for Ether in the next few weeks.

Analysis of the weekly price action for Ether was provided by options trader and pseudonymous Twitter user John Wick, who posted the following chart that suggests that there has been a confirmed reversal in Ether price.

“The weekly Ethereum has the same great looking setup, with a combination confirmed reversal & double bottom. Wouldn’t be surprised to see it eventually take us to just below $5,000 as first target.”

A similar sentiment was expressed by crypto analyst and pseudonymous Twitter user Crypto White Walker, who posted the following chart and stated that they “would like to see a wick till $2,600s again before it starts its ascend.”

“A close above $3,200 will make this chart look even better and in my opinion, safe buying zone is then only, once it breaks the lower highs on the daily time frame. Weekly RSI should be 55.5-56.5 soon.”

Insight into the Ether price action on a lower time frame chart was offered by crypto trader and pseudonymous Twitter user Altcoin Troy, who posted the following chart, which highlighted the major areas of demand for Ether.

“Currently testing H1 demand zone/orderblock around ~$2,800. Also in confluence with the 200-hourly EMA, which I would like to see hold as well. Key level to reclaim is $2,830 for more upside.”

A 2016 fractal points to an upcoming breakout

“Primary idea for Ethereum (and alts in general). Imagine how bearish things looked in 2016, even printing a macro lower low…”

A similar observation was made by Ali_charts, who posted the following chart and stated “check out how similar the consolidation phase that Ether saw between March 2016 and January 2017 looks to the price action that Ether is currently going through.”

Should the pattern projected by both TechDev and Ali_Charts play out, the price of Ether could reach as high as $28,000 during the next major bull wave.

The tiny Portuguese island of Madeira has "adopted" Bitcoin (BTC) - but what does that mean? The announcement made during the Bitcoin Miami Conference in...
Lees meer
Crypto nieuws Dutch/English