Dragonfly Research claims Ethereum is the ‘MS-DOS’ of blockchains

An experiment from Dragonfly Research that compared the performance of six blockchains by testing the capacity of Automated Market Makers on each has found Solana’s Orca DEX was the clear winner in trades per second.

It managed 273.34 trades per second and created a new block every 590 milliseconds.

A blog post by researcher “GM”  argued that while there was a rich ecosystem built on Ethereum Virtual Machine (EVM) compatible chains, the results showed “if you want really high performance now you have to look outside the EVM space.”  A now deleted line in an earlier version of the post suggested users will eventually need to “abandon the EVM.”

Dragonfly Research is the research arm of Dragonfly Capital and its portfolio page shows that it has invested in Celo, Avalanche, Cosmos, and Near, which is mentioned in the report. It has not invested in Solana.

GM concluded that with time, other layer-1 blockchains will surpass EVM-compatible chains. He wrote:

“Overall I come away with this impression: Ethereum is the MS-DOS of smart contract operating systems. But the current era of blockchains takes us into the Windows 95 era.”

EVM chains are blockchains that are compatible with Ethereum tooling. They often aid in the scalability of the Ethereum network.

The results of the experiment were published on Mar. 2. It was an attempt to compare blockchain throughput by measuring how many swaps could be made per block on native automated market makers (AMM). AMMs refer to decentralized exchanges (DEX) such as Uniswap and PancakeSwap that facilitate non-custodial token swaps on-chain.

The basic question GM attempted to answer was: “If you filled an entire block with Uniswap V2-style trades, how many trades per second would clear?”

Uniswap V2 was used as the benchmark given it is the dominant DEX with $1.6 billion in 7-day transaction volume. The benchmark was 18.38 transactions per second with 13.2 seconds per new block according to the report. Author GM noted that although it is not a perfect benchmark, it is “illustrative in getting a holistic view of performance.”

The leading DEX on each blockchain tested was spammed with token swaps on the most liquid pairs to determine the current limit of their capacity. They did not test rollup scaling on layer one chains because rollups can be used on all chains.

While the five EVM chains in the experiment could be tested the same way, Solana required a different methodology which GM wrote about in a subsequent blog post. 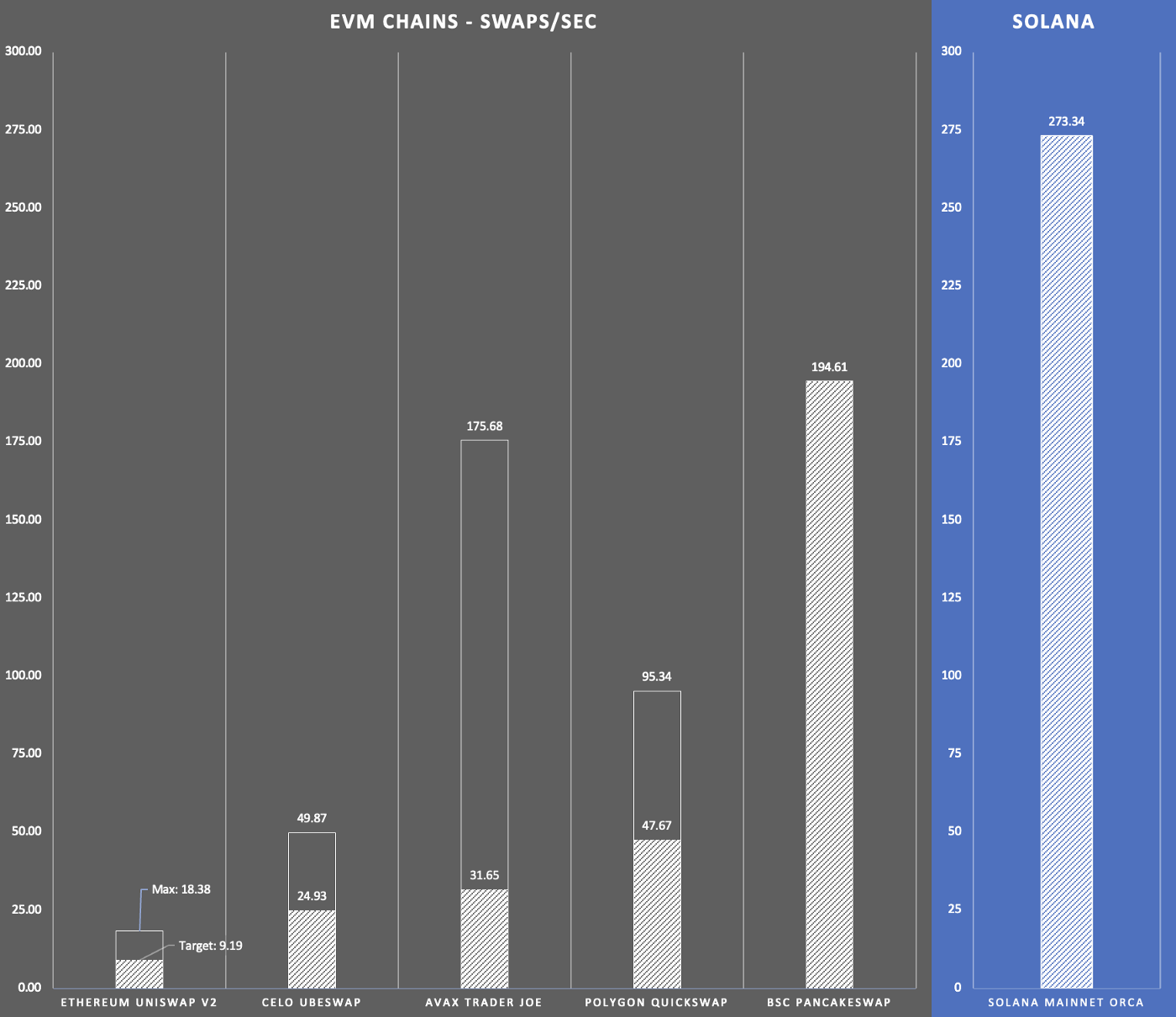 GM wrote that none of the blockchains in the test were being used to their full capacity and that he expects “all of the major L1s will improve in their performance over time.”

Although the results of the report demonstrated Solana’s faster performance, proponents of decentralization point to other issues on Solana. The team from the Spookyswap DEX on Fantom Opera – which is EVM compatible – criticized the findings, telling Cointelegraph that Solana “is a completely centralized network unlike Ethereum.”

Solana has also been plagued with service outages, which has raised concerns about the security of the network and the reliability of applications in the ecosystem. The Spookyswap team added

“Solana can be turned off and has a history of going down for days. You do not see that with proper EVM layer 1 chains.”

GM urged readers to “Do the math yourself” to confirm or refute the conclusions he has come to. He also noted that optimizations on blockchains happen very quickly, so with the introduction of a new optimization on any chain, the results may vary.

He also concluded that there was only a maximum 25x performance difference between Ethereum and Solana, demonstrating that in general “nobody is getting that great performance” from linear token transactions on-chain.