As the market continues to mourn over losses on the Terra UST and LUNA debacle, DEI, a stablecoin used as a collateral mechanism for third-party instruments built on the Fantom-based decentralized finance (DeFi) protocol DEUS Finance (DEUS), has failed to maintain its dollar peg, falling below 60 cents on Monday. 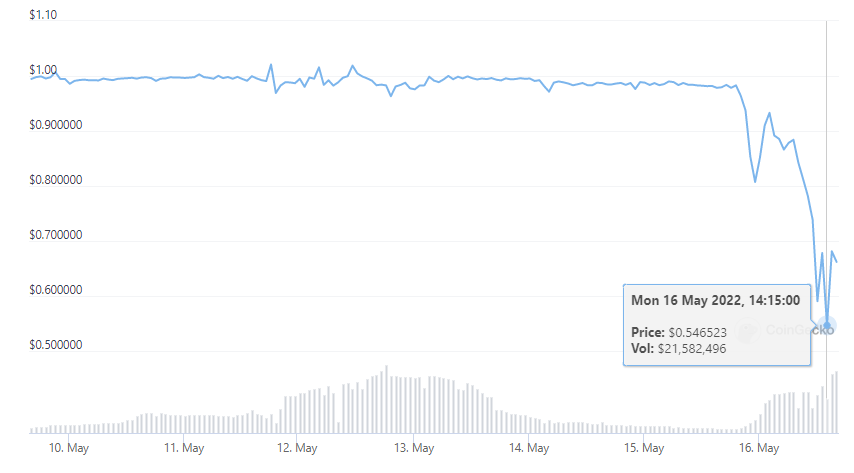 At the time of writing, DEI’s price is $0.66 with a market capitalization of $59 million. This follows stablecoin fears brought about by the UST and LUNA debacle and a decision by Deus Finance developers to pause DEI redemptions. However, according to its official Telegram channel, the DEI peg will be restored in the next 24 hours.

While DEI is also an algorithmic stablecoin like UST, the DEI stablecoin is collateralized, meaning that users are able to mint 1 DEI by depositing collateral worth 1 dollar. These can be assets like USD Coin (USDC), Fantom (FTM), DAI, WBTC or DEUS.

Similar to UST, DEI’s peg is stabilized by a mechanism that involves the minting and burning of DEUS. When minting DEI, a DEUS collateral is burned unless other tokens are used as collateral. On the other hand, when redeeming DEI, DEUS is minted.

Back in March, the DeFi project became a victim of a hack that resulted in Dai (DAI) and Ether (ETH) losses worth $3 million. Because of this, the platform decided to close its DEI lending contract. A day after the Deus Finance exploit, DeFi protocols Agave and Hundred Finance also reported exploits that resulted in losses of various cryptos that were worth a total of $11 million.

Faustin-Archange Touadéra, president of the Central African Republic, has announced the government will be backing an initiative centered around developing the country's blockchain infrastructure. In a...
Lees meer
Crypto news English

‘Crypto is just like the end of the 90s with the internet bubble,’ says Hodl CEO Maurice Mureau

For Maurice Mureau, CEO of crypto investment fund operator Hodl, there's "not a lot left" to invest in anymore. With soaring inflation, bonds are no...
Lees meer
Crypto news English

Final Capitulation — 5 reasons why Bitcoin could bottom at $10,000

Bear markets have historically been challenging to navigate for traders and the conventional set of "reliable" indicators that determine good entry points are unable to...
Lees meer
Crypto news English