DeFi dapps activity rises 3.7% in August for first time since May – Report

DeFi dapps showed a slight recovery for the first time since May, with the daily average of unique active wallets (UAWs) increasing 3.7% on a month-over-month basis, according to a report from DappRadar.

The rise was partially driven by the Flow protocol, which rose 577% UAW due to Instagram’s support of its NFTs and the game Solitaire Blitz. On the other hand, Solana UAW shrank by 53% in August from the previous month, while transactions dropped by 68%, the findings showed. 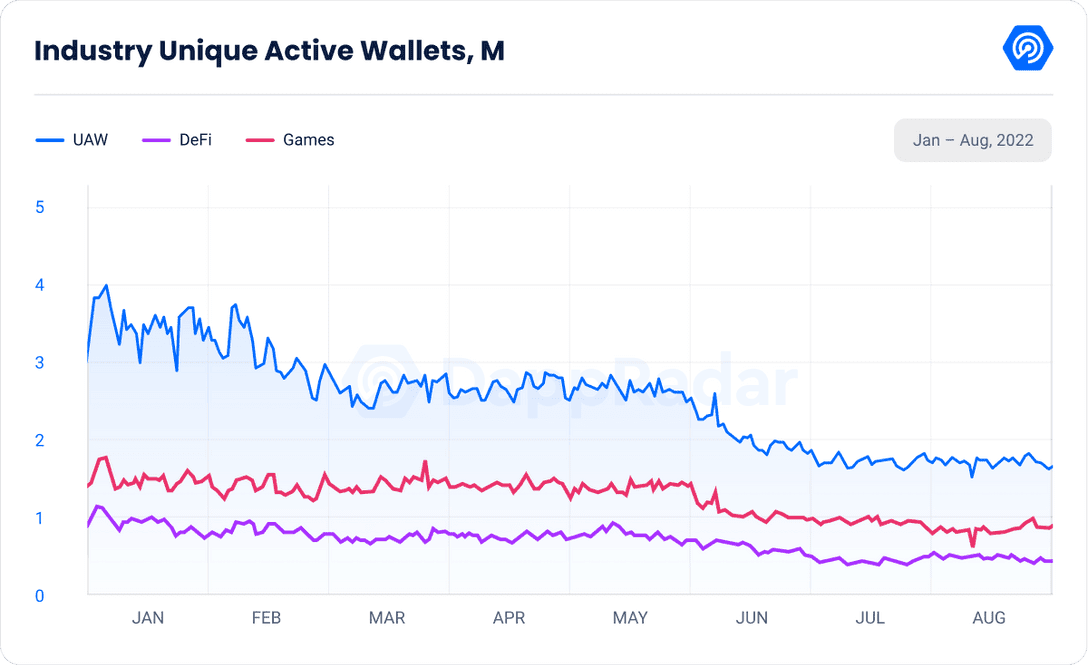 Despite the DeFi increase in unique active wallets, the overall DeFi Total Value Locked (TVL) still showed a significant drop; from $250 billion at the beginning of 2022 to $74.21 billion in August.

“The last time the TVL was this low was in April of 2021, when the space was just beginning to get momentum. This indicates that the DeFi TVL has decreased by 56% or more since August 2021.”

The report highlighted that August was “particularly difficult for the market because of the Tornado Cash crisis”, which dropped the industry TVL by 10.47% to lost $8.7 billion. On August 8., the U.S. Treasury Department accused the crypto mixer platform of laundering more than $7 billion in cryptocurrencies, including $455 million allegedly stolen by North Korean hackers.

Following the sanctions, the Tornado Cash (TORN) price plummeted by 45% in two days, losing almost half of its market value.

Ethereum chain controls 69% of the DeFi TVL with $51.47 billion, according to the report – although it has lost 11% last month, and dropped 56.63% since August 2021. Layer 2 protocols based on Ethereum showed signals of growth “mainly driven by the upcoming Ethereum Merge”, with Optimism increasing 57.61% in August for a $1 billion toal locked value, Arbitrum rising 14.36%, and Polygon gaining 6.50% month-to-month.

After months of investigation without any single arrest and the main offender on the run teasing the enforcers on Twitter, South Korean police have reportedly...
Lees meer
Crypto news English

Gary Gensler believes that most cryptocurrencies are securities and wants the SEC to regulate the market.   Gary Gensler, the Chairman of the United States Securities and...
Lees meer
Crypto news English

BTC to outperform ‘most major assets’ in H2 2022 — Bloomberg analyst