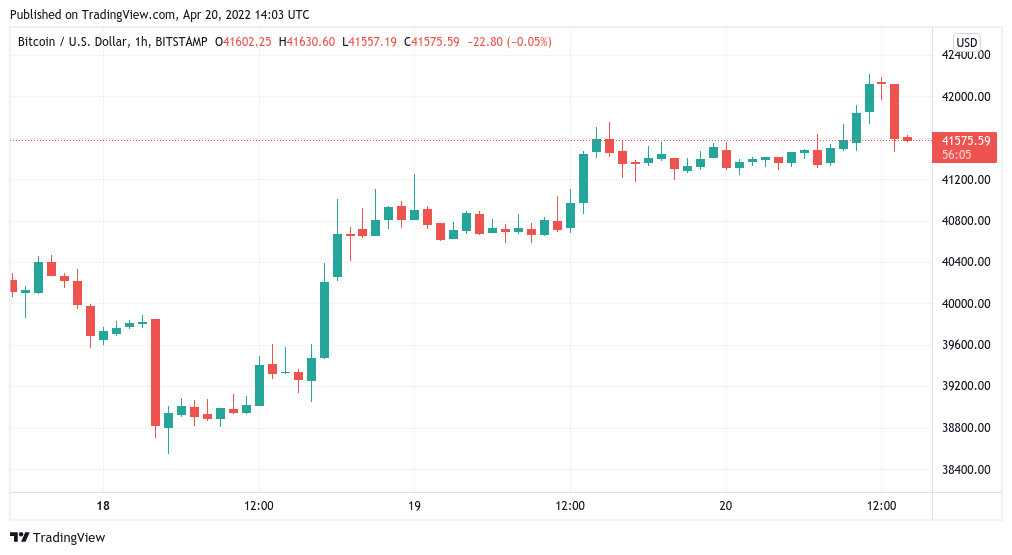 Data from Cointelegraph Markets Pro and TradingView showed BTC/USD reaching $42,220 on Bitstamp, its highest since April 11.

After adding as much as 9.3% versus local lows from Monday, the pair was now in line for “interesting” behavior, according to Cointelegraph contributor Michaël van de Poppe.

“Things get interesting at $42K,” he told Twitter followers

Like others on the day, Van de Poppe highlighted declining U.S. dollar strength as a boon for BTC price performance.

Bearish divergence on the Dollar $DXY, which is a great sign for further upwards momentum for #Bitcoin. pic.twitter.com/4BGSatk6f4

Volatility was nonetheless heavily in evidence on the return to the significant $42,000 level, as others voiced a lack of faith in Bitcoin’s gains continuing.

For popular trader Josh Rager, however, Monday’s dip to $38,600 and subsequent recovery was a pattern to keep an eye on.

“The last couple of fake-outs led to over 30%+ uptrends,” he noted Tuesday.

“Yesterday caught a lot of people off guard, though it wasn’t as deep of a pullback as prior. Could still see Bitcoin push up here over the next week – take it day by day.”

An accompanying chart highlighted price performance after wicks down to support through 2022. This time, the target lay at around $48,000 – the site of Bitcoin’s 200-day moving average.

On macro, fluctuations in stocks came in for criticism from Rager, who argued that performance was being hampered by sentiment changes.

Unusual moves in Netflix stock had become a talking point on the day after missed earnings sparked a mass sell-off.

According to sentiment gauge the Fear & Greed Index, however, the mood was better overall on Wednesday, the Index reaching its highest score of April so far – 50/100.