Bitcoin’s got 3 strikes, but investors remain calm despite price drop

According to Euronews Next, on March 14, the European Union rejected a proposed rule that could have banned the energy-intensive proof-of-work (PoW) mining algorithm used by Bitcoin and other cryptocurrencies. Several EU parliamentarians have been pushing to ban PoW mining over energy concerns. 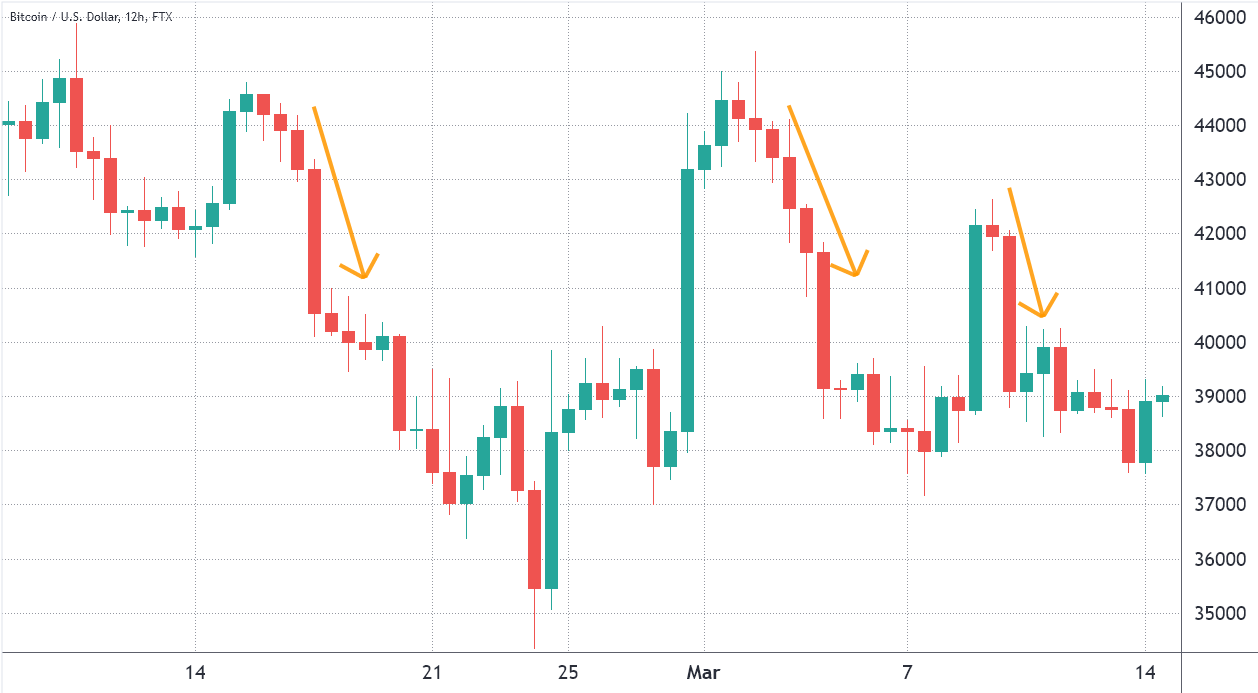 In terms of performance, the aggregate market capitalization of all cryptos was relatively flat over the past seven days, registering a modest 0.4% gain to $1.77 trillion. However, the apparent lack of performance in the overall market does not represent some mid-capitalization altcoins, which managed to gain 17% or more in one week.

Bitcoin presented a 2.5% gain over the previous seven days, while the vice-leader Ether (ETH) increased 3.6%. However, they were no match for the altcoin rally that happened. Below are the top gainers and losers among the 80 largest cryptocurrencies by market capitalization.

Weekly winners and losers among the top-80 coins. Source: Nomics

THORChain (RUNE) rallied after enabling synthetic tokens on March 10. Those derivatives are pegged to the value of other underlying collateralized assets. In THORChain’s version, the project has opted to back its synths with 50% of the underlying asset and 50% in RUNE.

Lastly, Terra (LUNA) rallied after Terraform Labs donated $1.1 billion to Luna Foundation Guard’s (LFG) reserves on March 11. LFG was launched in January as part of a broader effort to grow the Terra ecosystem and improve the sustainability of the network’s stablecoins.

Meanwhile, Celo (CELO) suffered a hack on its third-party email service on March 10. A phishing communication was sent to all of its 25,741 users, but the attack was quickly investigated, and the Celo Foundation posted alerts across its social channels.

The OKX Tether (USDT) premium is a good gauge of China-based retail trader crypto demand. It measures the difference between China-based USDT peer-to-peer trades and the official U.S. dollar currency.

Excessive buying demand tends to pressure the indicator above fair value, which is 100%. On the other hand, Tether’s market offer is flooded during bearish markets, causing a 4% or higher discount.

Currently, the Tether premium stands at 100.7%, which is neutral. Still, there has been a consistent improvement over the past two months. This data signals that retail demand is picking up, which is positive considering that the total cryptocurrency capitalization dropped 50% between Jan. 1 and March 14.

Notice how the accumulated seven-day funding rate is uneventful in most cases. Such data indicates a balanced leverage demand between longs (buyers) and sellers (shorts).

For example, Polkadot’s (DOT) negative 0.30% weekly rate equals 1.2% per month, which is not a burden for traders building futures’ positions. Typically, when there’s an imbalance caused by excessive pessimism, that rate can easily surpass 5% per month.

Some might say that the third failure to sustain Bitcoin prices above $42,000 was the nail in the coffin for the bulls, as the cryptocurrency failed to display strength during a period of global macroeconomic uncertainty and a massive commodities rally.

Still, there are no signs of bearishness from Asian retail traders, as measured by the CNY Tether premium, and there is no indication of pressure from leverage shorts (sellers) on futures markets.