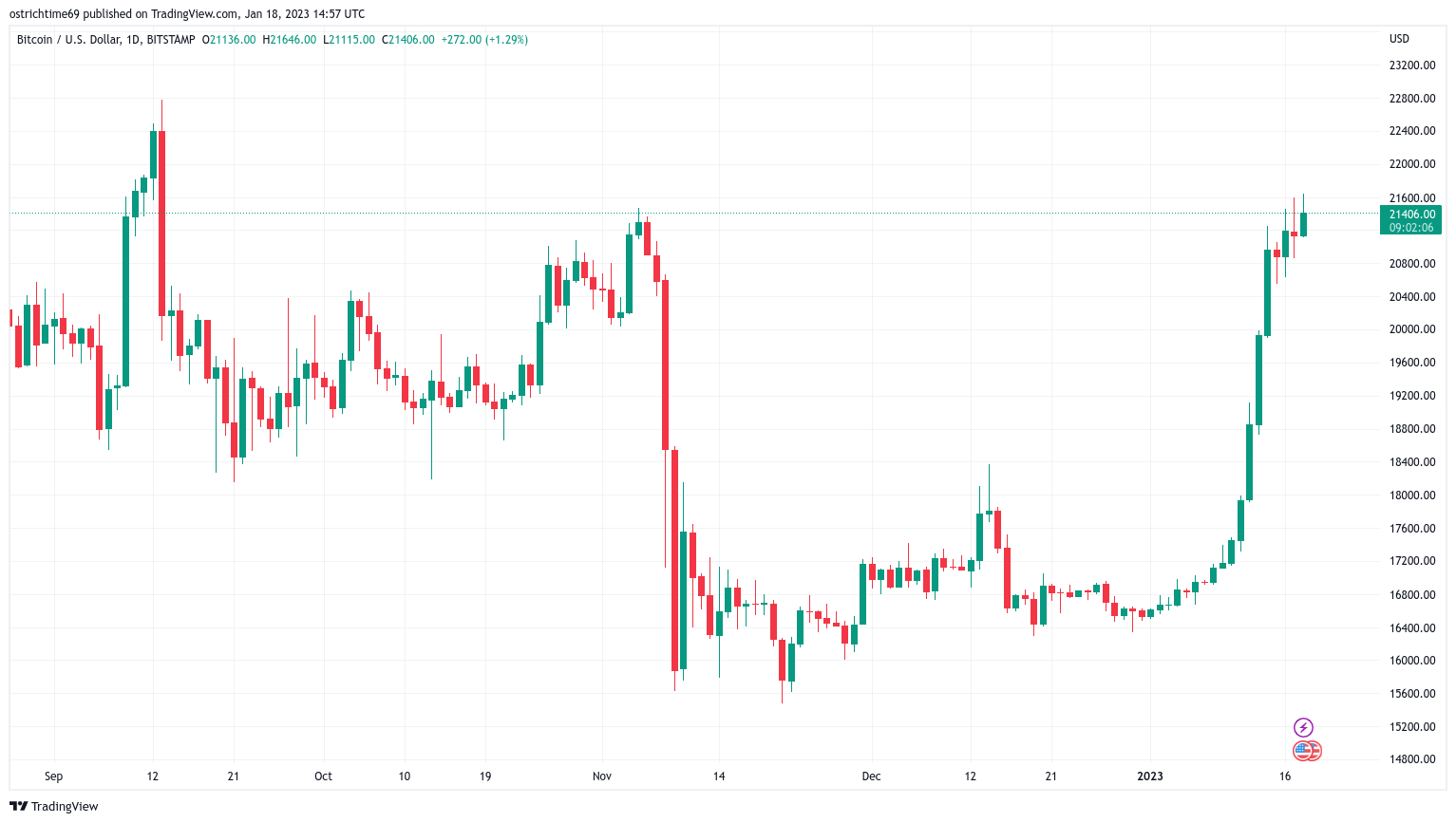 Data from Cointelegraph Markets Pro and TradingView showed BTC/USD spiking to $21,646 on Bitstamp.

A subsequent correction saw the pair moving around $21,400 at the time of writing, with U.S. stocks reacting to surprise data surrounding economic activity in December.

Bitcoin showed bullishness around the numbers, these potentially signaling less of a need for further aggressive interest rate hikes from the Federal Reserve going forward.

Earlier, Cointelegraph reported on the Bank of Japan itself not to make already very loose policy more restrictive, in contrast to the Fed and other major central banks.

An already flagging U.S. dollar index (DXY) thus extended a retracement which began with the Japan news as PPI hit, falling to 101.52, its lowest since late May last year.

BTC/USD last traded at the day’s high in mid-September.

As ever, there were plenty of nerves visible among traders despite the strong performance, with analytics resource Material Indicators repeating warnings over uptrend weakness.

“Waking up to the same game in the BTC chart,” it wrote on the day, referencing the status quo on the Binance order book.

“Declining volume makes me think momentum is fading, and the fact that some bids were removed is concerning. Watching to see if bid liquidity continues to replenish and move up. If not, the 21-Week Moving Average must hold.”

More optimistic was popular commentator Bloodgood, who disputed others’ bearish predictions of a drop to $12,000 for BTC/USD in 2023.

Analyzing the longer-timeframe picture, he argued that the two-year lows seen in Q4 constituted a “failed breakdown.”

“Failed breakdowns usually lead to strong reversals,” he added on an accompanying chart with a key support zone at around $19,000.

“$12k is not in play as long as we stay above the blue line. Get another weekly candle to close above and we go higher.”

A snapshot of long and short positions by Filbfilb, co-founder of trading firm Decentrader, was similarly heartening.

“The liquidity picture looks a lot different now for BTCUSD. More bears sweating than bulls at this point,” he tweeted.

The Bank of England (BoE) and U.K. Treasury are gearing up plans to create a digital currency that could "provide a new way to pay"...
Lees meer
Crypto news English

The creator of the nonfungible token (NFT) collection Bored Ape Yacht Club has settled a lawsuit with one of the developers behind a copycat collection...
Lees meer
Crypto news English

Newly proposed advertising rules in the United Kingdom could potentially see executives of crypto firms face up to two years of prison for failing to...
Lees meer
Laad meer