Bitcoin (BTC) corrected from highs above $45,000 on March 3 as traders’ optimism over continued upside remained in the driving seat. 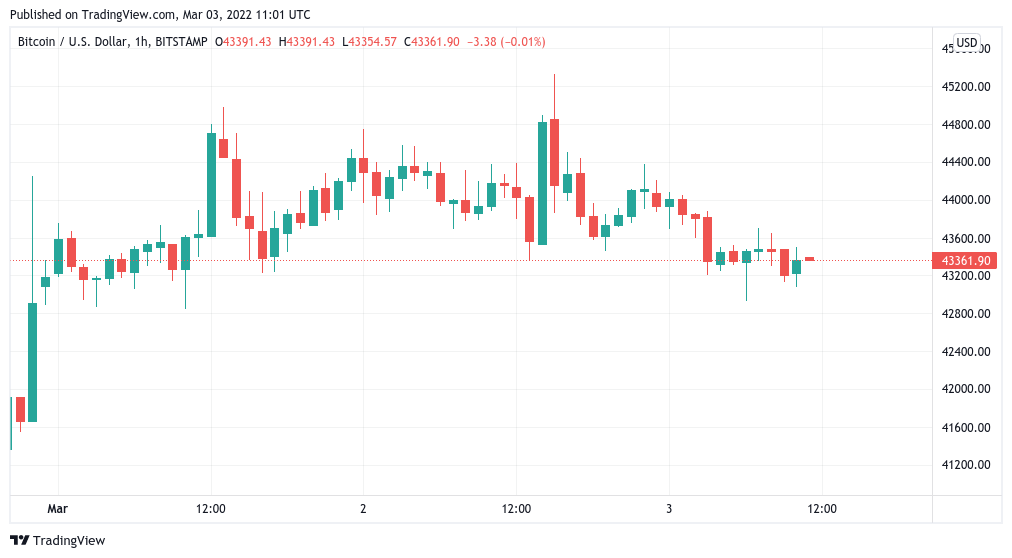 The reset was expected, punctuating a multi-day uptrend which had seen the pair add $10,000 in a single week.

“Looks to me like we’re going to see another run to the highs, as the correction is not as swift as we normally would be.”

“The small fish are stacking sats like there is no tomorrow,” analytics resource Ecoinometrics commented alongside a chart showing buying habits this week.

Despite the overall bullish performance this week, none of the top ten cryptocurrencies by market cap were all in the red on daily timeframes at the time of writing.

While BTC/USD was down around 1.8%, major altcoins fared worse, led by Solana (SOL) and Cardano (ADA), both more than 5% lower.

Ether (ETH), the largest altcoin by market cap, shed 3.5% to return under the $3,000 mark, something which had yet to established itself as meaningful support.

“The markets are relatively calm. People have low interest in crypto right now. Engagement is low on social media on all accounts,” Van de Poppe continued.

“Ethereum gas fees are on an ultra-low level. Those are the times that you actually should start paying attention, as it gives opportunities.”

Cardano-based accelerator program Genius X has seen more than $105 million worth of ADA delegated to its initial stake pool offering (ISPO). This comes after the...
Lees meer
Laad meer