Bitcoin (BTC) held on to fresh gains on April 14 after a rebound in line with Wednesday’s Wall Street open flipped the mood. 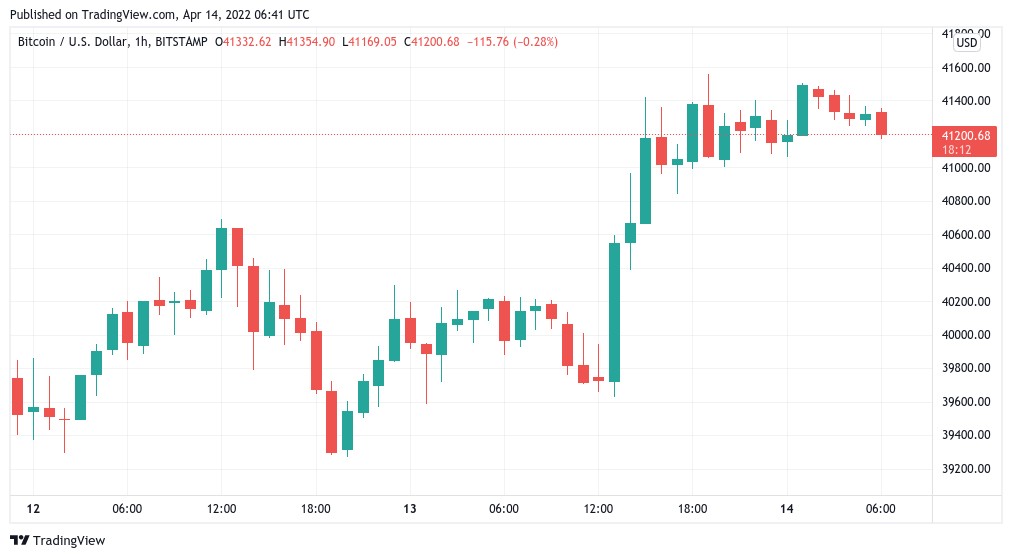 Data from Cointelegraph Markets Pro and TradingView showed BTC/USD still trading above $41,000 Thursday, having reclaimed the $40,000 mark during the move higher.

“So far so good, I expected a move to 41k but I doubt about going for an extra leg down to the green box (blue),” popular trader Crypto Ed commented overnight alongside a chart with near-term price targets.

$40,500 showed no signs of falling at the time of writing, with volatility ebbing into Thursday and Bitcoin seeing no major threat to its bounce.

Zooming out, others took the opportunity to argue that despite the lack of bullish sentiment, Bitcoin itself was far from bearish this year.

#Bitcoin has been in an uptrend on the daily time frame for nearly 3 months: pic.twitter.com/N3EVgVsj27

The lower the time preference, the less cause for panic – year to year, fellow analyst TechDev demonstrated, Bitcoin had more than a passing resemblance to traditional market behavior, even after dropping over 50% from November’s all-time highs.

In focus this month was a similar chart pattern between Bitcoin now and the Dow Jones from the start of the 1990s.

Bitcoin’s stocks correlation is nonetheless a cause for concern for some, with a drawdown tipped to impact price significantly.

For Blockware lead insights analyst William Clemente, meanwhile, there were other reasons to keep the faith.

Cryptocurrency exchanges were losing BTC reserves at a rate rarely seen before, he noted Wednesday, implying that any rise in demand would compete with a rapidly-dwindling supply, boosting price performance further.

“On only 3 other occasions have we ever seen Bitcoin withdrawn from exchanges at this rate,” he wrote alongside data from on-chain analytics firm Glassnode.

Exchange withdrawal spikes are a much debated phenomenon, and excitement among pundits has increased this year in line with accelerating demand.

Cardano-based accelerator program Genius X has seen more than $105 million worth of ADA delegated to its initial stake pool offering (ISPO). This comes after the...
Lees meer
Laad meer