Bitcoin (BTC) broadly held levels at $44,000 and above on Feb. 16 amid fresh optimism that another macro low would be avoided. 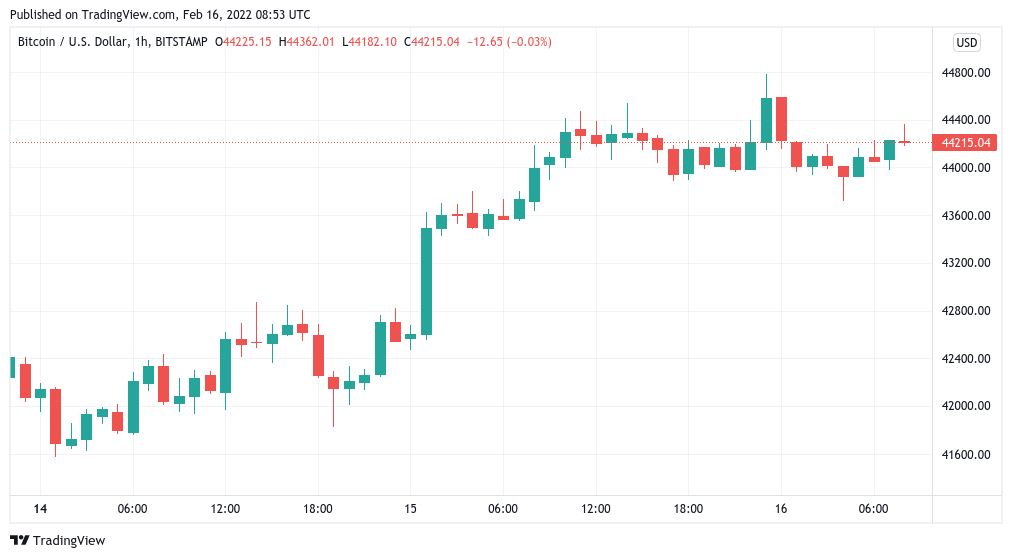 Data from Cointelegraph Markets Pro and TradingView showed BTC/USD rebounding after an overnight dip to $43,725 on Bitstamp.

In a tightening range, the pair looked increasingly primed for a breakout up or down Wednesday, as support and resistance levels stayed within a short distance of spot.

While fears that a stocks correction could cause fresh pain for bears remained, one analyst, in particular, argued that there was now hardly any impetus to sell BTC after three months of downside.

“When I consider everything BTC HODLers withstood in 2021- When I observe global de-risking for 3+ months- When I see 48% of Realized Cap STILL held from 3-12 months ago after a $33k scare- I ask: with all existing FUD priced in, barring surprises, who remains to sell here?” TXMC argued.

An accompanying chart highlighted coins that last moved between three and six months ago – the run-up to the $69,000 all-time high – growing as a proportion of the overall BTC supply.

$BTC – Daily OBV chart. And people telling me we aren’t bottomed out… This is almost a more bullish move than last time we went from $30,000 to $60,000. Double bottom, very sharp bullish V spike. Price action is just noise and people are listening too much to #CryptoTwitter. pic.twitter.com/vURzxYeImG

“These are the conditions where retail waits to buy Bitcoin after it’s at an all time high and it’s all over the news again,” it added in a tweet on the day.

Despite the recovery from last month’s lows, interest in Bitcoin stayed practically nonexistent from mainstream sources, with Google Trends data showing a distinct lack of curiosity from users.

There was better short-term news for some altcoins, with Ether (ETH) gaining on the day to cement support above the $3,000 mark.

Related: Traders say $4,000 Ethereum back on the cards ‘if’ this bullish chart pattern plays out

The top-ten cryptocurrencies by market cap were led by Avalance (AVAX), meanwhile, which put in 24-hour returns of over 10% to continue its success from recent weeks.

Crypto venture fund giant Andreessen Horowitz (a16z) has highlighted that development and demand on Ethereum is "unmatched" despite the network's high transaction fees. The firm does...
Lees meer
Laad meer