Bitcoin (BTC) broke through $43,000 after the March 3 Wall Street open with U.S. equities trending down. 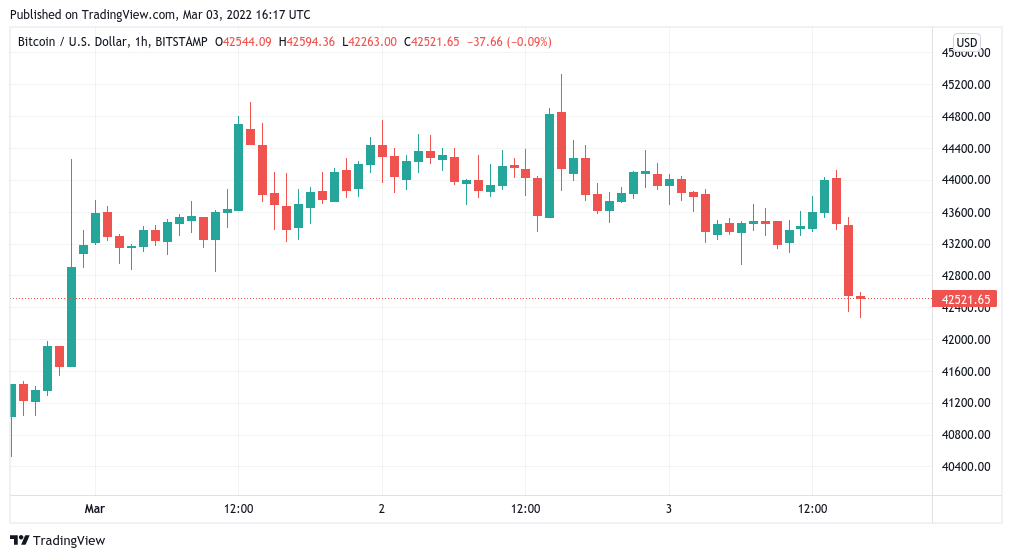 Data from Cointelegraph Markets Pro and TradingView tracked BTC/USD as it stayed within a narrow intraday range Thursday.

#BTC
take out the previous swing low, lining up nicely with the green box pic.twitter.com/rplkQ0rhIS

“The last segment of our corrective structure that preceded the 3rd impulse wave from 10k to 60k+ was a triangle, would be nice to see something similar here if our bottom is in,” popular Twitter account Credible Crypto said Wednesday comparing current behavior to the bull run which began in September 2020.

“Remember a longer base typically leads to a stronger impulse. Pullbacks on $BTC to 38-42k are healthy.”

Others had previously considered a slightly higher local top may enter prior to continuation of rangebound action.

Stocks were on edge on the day, with the S&P 500 down 0.7% a day after the clearest signals on a possible key rate hike yet from the United States Federal Reserve.

Safe haven status is back?

Bitcoin, the firm argued in an update to Telegram subscribers Wednesday, is regaining its safe-haven status, while altcoins are unable to say the same.

“The focus on BTC was reflected even in the vol markets with 10d realized volatility 4% higher for BTC than ETH (99% vs 94.5%). Anecdotally, there has also been much more topside interest in BTC compared to ETH,” it wrote.

“This has caused the implied vol spread between BTC and ETH to drop back to lows of around 7%. With the recovery bounce in spot, implied vols have been trading softer as well. BTC 1-month implieds have fallen back to 65% from 80% highs.”

QCP added that “some downside risk” should remain in Q2 thanks to Fed policy, regardless of the size and timing of the rat