Bitcoin (BTC) recovered from a major dip at the May 26 Wall Street open as the market quickly exhausted buy support. 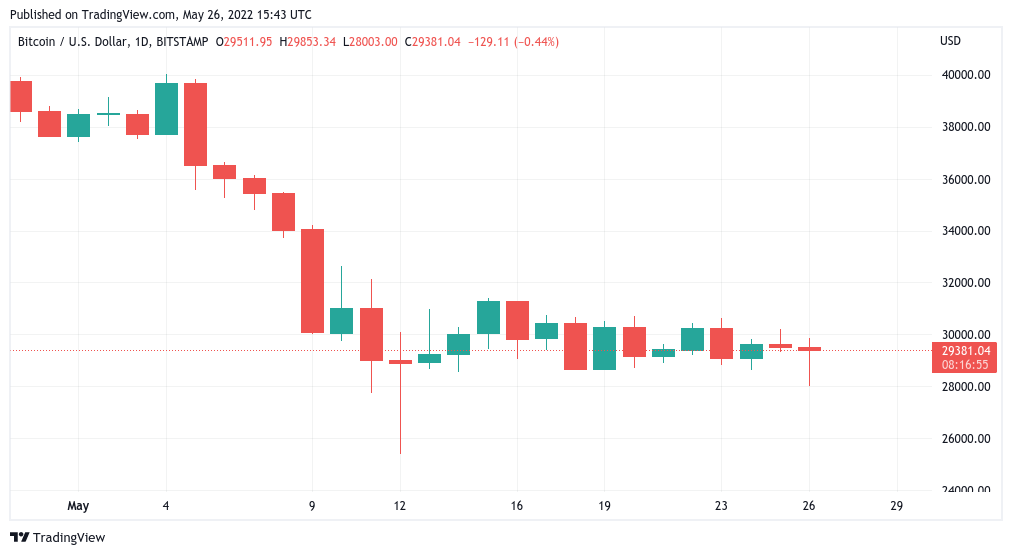 Data from Cointelegraph Markets Pro and TradingView showed BTC/USD dropping to $28,000 on Bitstamp – its lowest since May 12 and the Terra LUNA implosion.

Progress had already accelerated to the downside on the day, this culminating in a liquidity grab that sent 24-hour BTC liquidations to $117 million.

A subsequent bounce saw a recovery above $29,000, where Bitcoin traded at the time of writing.

For Cointelegraph contributor Michaël van de Poppe, the swoop to fill bids was enough to ensure some fresh upside.

Now we’re good to go up as all the liquidity is taken on the downside.

“We are seeing A LOT of Bitcoin liquidity changing hands today. Everywhere a bid wall appears, it gets absorbed,” it told Twitter followers alongside a chart from major exchange Binance.

Fellow trading account Il Capo of Crypto, continuing a conservative outlook on near-term price action, predicted that the current bounce would be the “last bull trap” before a return to $25,000 based on order book performance.

May 26 thus stood out from other trading days during the week thanks to volume returning to BTC/USD markets. As Cointelegraph reported, its absence was becoming a source of concern for analysts.

Casting the net farther out, market commentators were keen to see signs of an overall change in trend on Bitcoin.

Related: Bitcoin price may bottom at $15.5K if it retests this lifetime historical support level

For popular analyst Root, those signs came from the behavior of long-term holder (LTHs) on the day.

According to on-chain data, LTHs were finally slowing sales of BTC, as shown by their cost basis leveling out. Cost basis refers to the price at which LTH accounts purchased BTC on aggregate, and when it falls, it reflects declining LTH resolve.

Commenting in Twitter thread, Root described the data as “perhaps the most important chart in BTC currently.”

“For the past months we’ve had LTH capitulation ⁠- shown by the rapidly falling LTH Cost Basis,” it wrote.

“An uptick is a first sign that LTH’s might have stopped capitulating! Note: early signal, but finally a change in trend!”

He added that those LTH entities selling were those who purchased BTC at the top and that the sales thus had a capitulatory quality to them.

Due to Celsius Network's withdrawal suspension in mid-June, the very topic of crypto lending made its entryway to the acute issues list for the regulators....
Lees meer
Laad meer