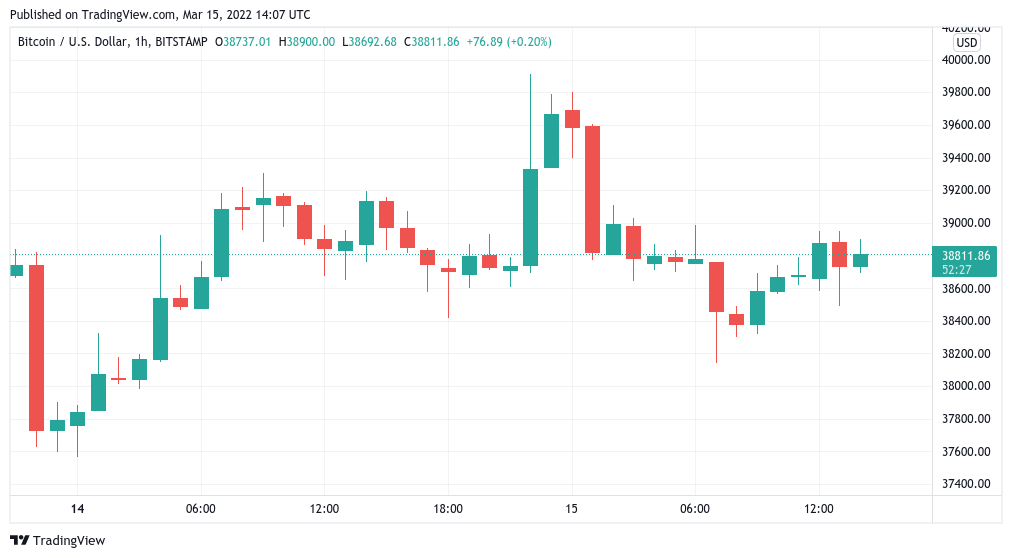 Crunch time for the Fed on inflation

Data from Cointelegraph Markets Pro and TradingView highlighted a roughly $500 fall for BTC/USD after failing to reclaim $39,000 on the day.

An overnight push towards $40,000 had ended in disappointment for bulls, setting the scene for lackluster performance into the Fed decision.

With inflation running wild, analysts believed that more than a 0.25% rate hike was unlikely due to the need to maintain equilibrium in a market already bloated from liquidity injections and uncertain, thanks to the Russia-Ukraine war.

“The bottom line is we will proceed but we will proceed carefully as we learn more about the implications of the Ukraine war,” Fed Chair Jerome Powell told U.S. lawmakers earlier in March.

Bitcoin was characteristically volatile on the shortest timeframes but rangebound on longer ones at the time of writing, this behavior having characterized the largest cryptocurrency on many occasions throughout 2022.

For popular analyst Matthew Hyland, a decisive break of the 2022 range high or low was now needed in order to entertain a new perspective.

Everything else is just noise!!! pic.twitter.com/ujmVzYQq1v

“It interesting that we have spent more time closer to $46K than $33K,” he noted as part of further comments.

“Could make the argument, demand is rising, selling pressure decreasing? Either way though, it wont sit in this range forever.”

The Fed announcement was due at 2 pm Eastern Time March 16, followed by a press conference by Powell a half-hour later.

On the topic of Bitcoin and its ranges, a longer-term view sought to convince timid market participants that all was not so bad on March 15.

Analyzing poor sentiment across crypto, popular Twitter account “Cryptobirb” reasoned that since the start of 2021, BTC/USD had still managed to post a series of higher highs and higher lows.

It’s intriguing how flat $BTC performance has been for over a year already, while the traders’ sentiment compares to the hopeless depths of the 2018 bear market. The longer #Bitcoin has moved sideways, the more depressed the traders got. Yet, the market’s made higher high and low pic.twitter.com/0sHLu8nTuB

As Cointelegraph further reported, two years ago this week, Bitcoin traded at just $3,600 – more than ten times lower than at present.

Indian crypto businesses are struggling with the new tax policies as trading volumes have dried up and many established crypto firms are looking to relocate...
Lees meer
Crypto news English

Block, the pro-Bitcoin (BTC) umbrella company that hosts Cash App, Square and Afterpay, continues its growth in 2022. According to its Shareholder letter, in the...
Lees meer
Laad meer