Bitcoin (BTC) fooled no one with its criss-crossing of $40,000 on April 15 as traders remained firmly risk-off on BTC. 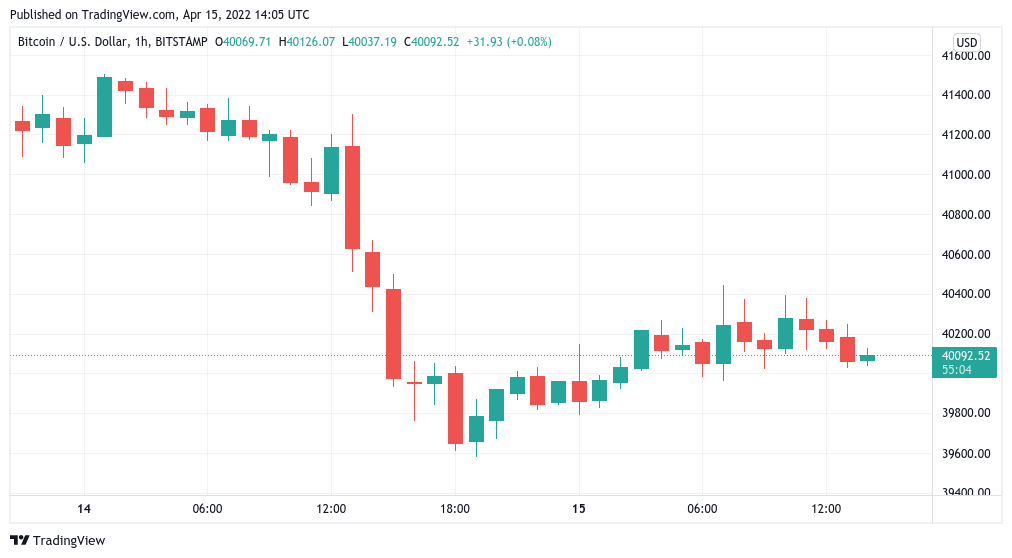 Data from Cointelegraph Markets Pro and TradingView showed BTC/USD bouncing modestly after returning to the $39,500 zone on Thursday.

The move erased an impulse move higher from earlier in the week, underscoring the lack of bullish market momentum despite conspicuous demand for Bitcoin among institutional buyers.

For popular trader Crypto Ed, there was reason to believe that further downside would soon ensue. Current levels, he warned viewers of his latest YouTube update, did not constitute suitable ground for a long position.

“With the upcoming weekend, I would be very careful longing here,” he summarized.

Markets commentator Miles Johal meanwhile noted that the pair was now interacting with the 0.75 Fibonacci level, this having been a support feature throughout 2022.

Back to dancing with the 0.75 $BTC pic.twitter.com/dDDVjZSJYa

Elsewhere, excitement was brewing once again over the concept of Bitcoin being in a so-called “supercycle.”

Previously also popular, the concept revolves around viewing BTC price action as more than a product of its roughly four-year halving cycles.

Doing so, some suggest, explains why Q4 2021 – the year after Bitcoin’s latest block subsidy halving – failed to produce the “blow-off top” common to previous post-halving years.

Instead, BTC/USD could just be in a consolidation phase with the majority of its upside still to come.

“Interesting. Maybe we never got the blow off top…because it hasn’t happened yet,” Josh Olszewicz, head of research at alternative asset management firm Valkyrie reacted.

The supercycle comparison chart was originally posted to Twitter earlier in the week.