AVAX’s price established an intraday high of $19.75 on Aug. 30, two days after bottoming out locally at $17.50, amounting to a 15% rise. The token’s modest recovery followed selloffs incurred by a sensational CryptoLeaks report.

️ #Avalanche is the top rising topic in #crypto following a claim that its #blockchain was attempting to manipulate regulatory systems. After hitting a 7-week low about 9 hours ago, $AVAX is up +7.5% since. We’re watching how news of this unfolds. https://t.co/Ry1mGvdMap https://t.co/OHmNMkpAzS pic.twitter.com/kk3zue4d3G

AVAX’s price fell 3.5% on Aug. 26, the day on which CryptoLeaks released an unverified video showing Kyle Roche, the partner at Roche Freedman, saying that he could sue Solana, one of Avalanche’s top rivals, on behalf of Ava Labs.

The token fell by another 7.5% the next day after the whistleblower website released the full report, including another unverified video featuring Roche. 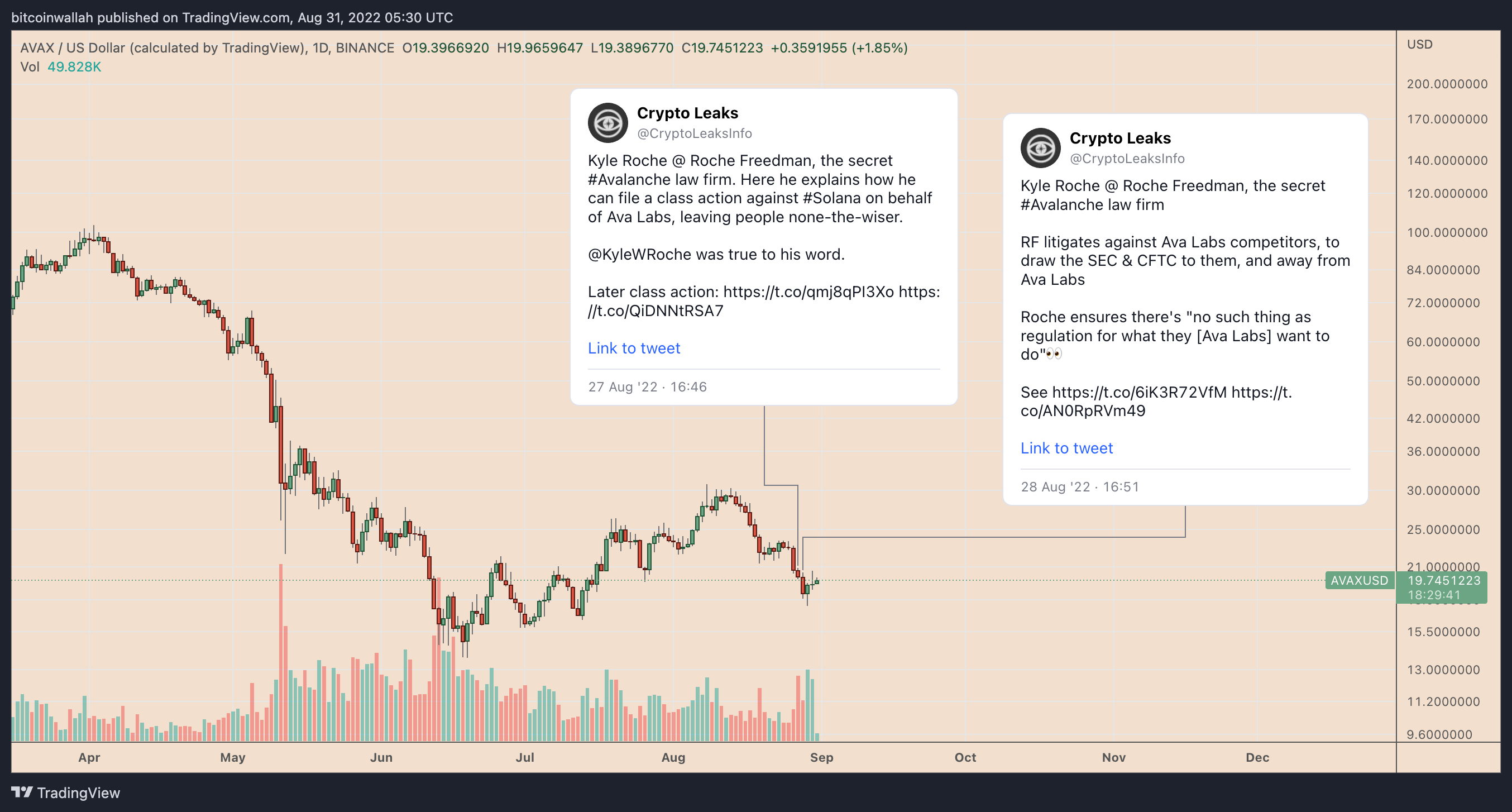 Avalanche’s fundamentals are strongly tied to the overall cryptocurrency market, which keeps it prone to undergoing additional downtrends.

Independent analyst PostyXBT noted that AVAX’s price could decline to the $13-$15 range next and to “keep BTC in mind” while placing a short position toward the area.

Only concern being deviation caused by $BTC running higher towards $20.8k.

Analyst BrechTP also anticipates the price to crash toward $14 based on a “head and shoulder” setup, as shown below.

Related: A sharp drop in TVL and DApp use preceded Avalanche’s (AVAX) 16% correction

Conversely, analyst TraderSZ sees AVAX’s price to continue its recovery trend in the coming days. His setup, as illustrated below, envisions the Avalanche token to reach approximately $30 in September.

The upper trendline is near the TraderSZ’s price target of $30, as shown below.

In other words, AVAX could rally by over 55% from its current price levels.

Voyager Digital filed for Chapter 11 bankruptcy in July after its exposure to the toxic Three Arrows Capital led to its ultimate downfall. This week,...
Lees meer
Laad meer