Avalanche (AVAX) gained 0.5% to reach over $31 on May 23 but AVAX price remains trapped inside a trading range that appears like a “bear pennant” structure.

Avalanche could get buried technicals

Bear pennants are bearish continuation patterns, i.e., they resolve after the price breaks out of them to the downside and then-as a rule of technical analysis-falls by as much as the height of the previous downtrend, also called “flagpole.”

AVAX is nearing a technical breakdown as its price moves toward the pennant’s apex, i.e., the point where its upper and lower trendlines converge. 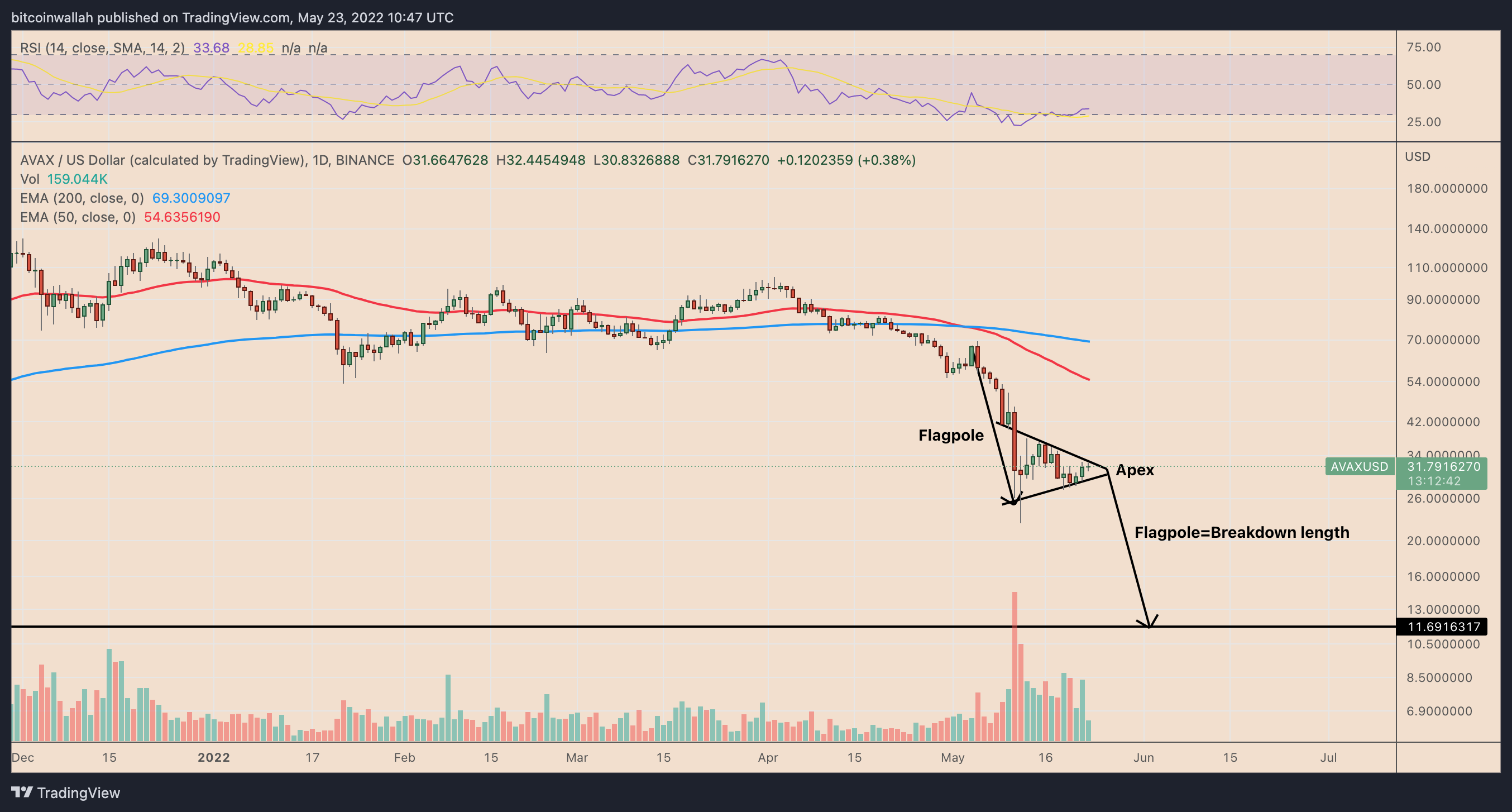 For instance, the Avalanche token’s volume profile shows it trading near its point of control (POC)-the level where the traders were most active since 2021-around $32.

Interestingly, the level was instrumental in capping AVAX’s downside attempts in the August-September 2021 session; it preceded a 390% bull run, which saw AVAX reaching its record high of around $150 in late November 2021.

The POC level also served as a median during the consolidation trend witnessed between January 2021 and May 2021. Now, It holds as a price floor even as AVAX eyes the bear pennant breakdown, as discussed above.

That raises Avalanche’s possibility of retesting $23 as support, followed by a rebound move toward $40. Such a move would risk invalidating the bear pennant setup.

Today, Avalanche trades nearly 78% below its record high of around $150, burdened by a strong bearish sentiment elsewhere in the crypto market in a higher interest rate environment.

In addition, the recent Terra ecosystem meltdown has also stressed the prices of AVAX and other cryptos lower.

JUST IN: #AVAX CEO says the company lost $60 million from the $LUNA and $UST collapse.

But the worst is still yet to come if AVAX continues trending in sync with the top crypto Bitcoin (BTC) and, in turn, its global risk-on counterparts, such as Nasdaq. The correlation coefficient between Avalanche and Nasdaq was 0.91 as of May 23, showing that they have been moving in near-perfect tandem.

On the brighter note, AVAX shows promise of an interim upside scenario with a divergence between its rising relative strength index (RSI) and falling prices, according to Scott Melker, an independent market analyst.

“There are potential bullish divergences with oversold RSI on a ton of daily altcoin charts,” said Melker, adding:

“Need definitive elbow up on RSI, but I still think we have been bottoming here across markets…. for now.”