Bitcoin (BTC) needs to hold current levels and work to reclaim higher ones to avoid a crash in the $20,000 range, the latest analysis warns. 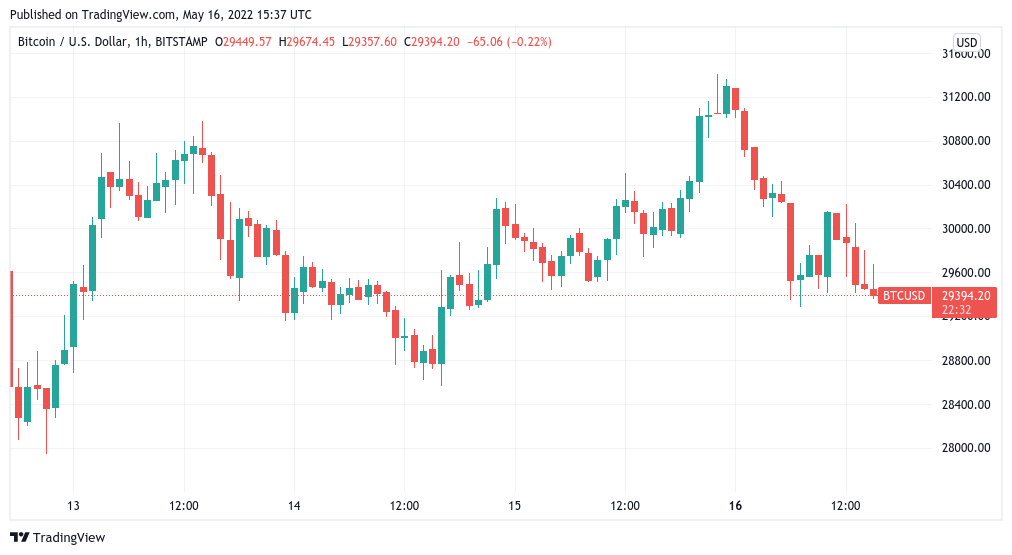 Data from Cointelegraph Markets Pro and TradingView showed BTC/USD still failing to cement $30,000 as support on the May 16 Wall Street open.

The pair had seen fresh losses after the weekly close at $31,300, this in itself disappointing market participants after sealing a record seventh consecutive red weekly candle.

Even as the Luna Foundation Guard (LFG) revealed that it had sold almost all of its BTC reserves during last week’s LUNA and TerraUSD meltdown, the implied lack of future selling failed to lift the mood on markets.

“Coming days going to be very important IMO. Keep these levels, grind higher from here,” popular trader Phoenix summarized in a Twitter post on the day.

Phoenix is far from alone in forecasting a return to levels even lower than last week’s floor at just under $24,000.

Joining the consensus, fellow trader and analyst Rekt Capital likewise pointed to $20,000 being an area of interest should current levels fail to hold and buyers not materialize.

Let’s see if buyer’s show up soon because next major Monthly support lower down is at ~$20000 (orange)#Crypto #Bitcoin pic.twitter.com/TKcvFcSENh

Last week’s action, he added, could have already created a new trading range for Bitcoin with its macro range low at $28,800 figuring as its ceiling.

“If this turns out to be the case, Macro Range Low could flip into resistance to again reject price to lower levels,” he explained.

“Not sure whether we’ll be getting that test going around $28.4K, but this is a scenario where I’d be looking at,” he told Twitter followers.

On macro, the picture remained broadly similar to recent weeks: stocks under pressure amid an ongoing surge in U.S. dollar strength.

Twitter stock again hit the headlines, this time underperforming tech stocks to trade at less than it had done before Elon Musk announced his 9% equity stake and takeover bid.

For Bloomberg Intelligence chief commodity strategist Mike McGlone, there were comparisons to be made with the dotcom bubble.

#Cryptos vs. #StockMarket: $1 Trillion Wipeout vs. $20T – Crypto assets were top performers in the past decade, and the trend is accelerating in the 2020s. The internet bubble that burst in 2000 was a reminder that nascent technologies/assets are synonymous with volatility pic.twitter.com/Jwxt6Yr8iG

“If the risk-asset tide keeps ebbing, one of the best performers in history — Bitcoin — should face fitting mean reversion, but early adoption days may favor the nascent technology/asset,” he wrote in a further tweet on the day.

“Both Bitcoin and the S&P 500 have dropped below their 100-week moving averages.