Bitcoin (BTC) extended its gains nearly hitting $45K on March 1 as interest rate speculators reduced their bets on aggressive rate hikes in 2022, the number of whale addresses spiked, and amid speculations that BTC is proving itself as an apolitical safe-haven.

BTC’s price surged more than 4% to reach nearly $45,000, a day after recording its biggest one-day increase since February 2021 as a flurry of sanctions on Russia, including a ban from accessing the global banking system SWIFT, raised concerns over their impact on global growth and inflation.

For instance, swaps tied to the Federal Reserve’s mid-March meeting anticipated a 24.5 basis point (bps) tightening as of March 1, 2022. That indicated a 0.5 bps rate increase – which had a 100% approval from interest rate traders last month – is less likely to happen. 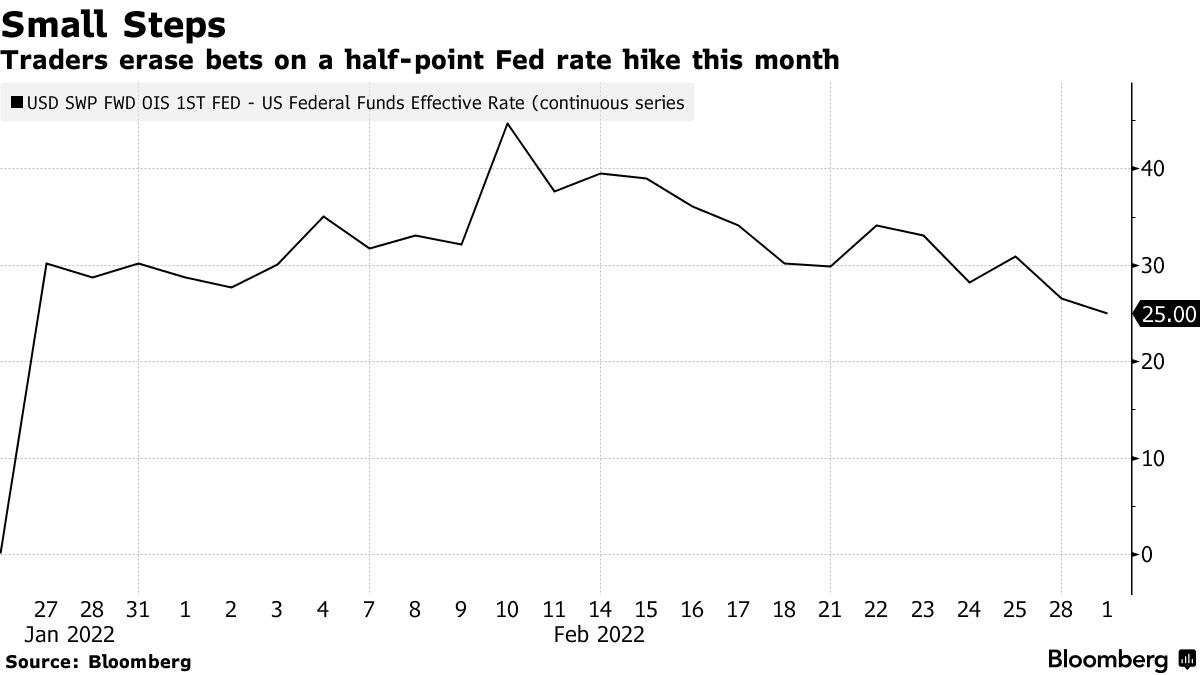 Meanwhile, traders also reduced their expectations of the number of rate hikes in 2022 to five from seven just days ago, according to Bloomberg’s Lisa Abramowicz, who shared the following chart.

The repricing of the Fed outlook appeared as investors’ demand for safe-havens, including U.S. Treasuries and gold, boomed in the past few days.

Bitcoin, which had earlier lost more than half of its value due to fears surrounding aggressive Fed rate hikes, also responded with a sharp recovery, further in part due to reports that Russians were buying the crypto to bypass sanctions.

“Bitcoin saw a significant upward move today as it appears to have slightly regained its safe-haven status while the Russia-Ukraine conflict continues to intensify,” Walid Koudmani, an analyst at XTB Market, told Bloomberg.

Data provided by crypto research firm CoinMetrics also showed a significant spike in the number of addresses holding at least 1,000 BTC, typically considered “whales” by the industry. Their number jumped from 2,127 on Feb. 27, to 2,266 on Feb. 28.

Raphael Bostic, president of the Federal Reserve Bank of Atlanta, favored a 25 bps rate hike at the Federal Open Market Committee’s meeting at the end of February. Nonetheless, he also said that a higher than anticipated inflation reading could have him “look at a 50-basis-point move for March.”

But Ecoinometrics analyst Nick argues that the Russia-Ukraine crisis has now forced the Fed to walk on shaky ground. With inflation likely to remain higher due to higher oil prices, he explained, a too aggressive rate hike in March could risk crashing the stock market.

“Inflation is so high that we can probably afford a stock market dip all the way down to -20%,” he wrote.

“But below that, they’ll have to call back the tightening or risk a multiyear bear market […] Of course that’s not good for Bitcoin.”