3 reasons why Avalanche (AVAX) price can double by March 2023

Avalanche (AVAX) has opened 2023 with a bang, rising nearly 55% in the first two weeks. And now, a mix of technical and fundamental indicators hints that the token will keep rallying into March.

The AVAX/USD pair appears to have been forming a falling wedge pattern since May 2022 and has now entered the breakout stage of this pattern.

A falling wedge forms when the price trends lower inside a range defined by two converging, descending trendlines. The pattern resolves after the price breaks out of its range to the upside and, as a rule of technical analysis, can rise as high as the distance between its upper and lower trendlines. 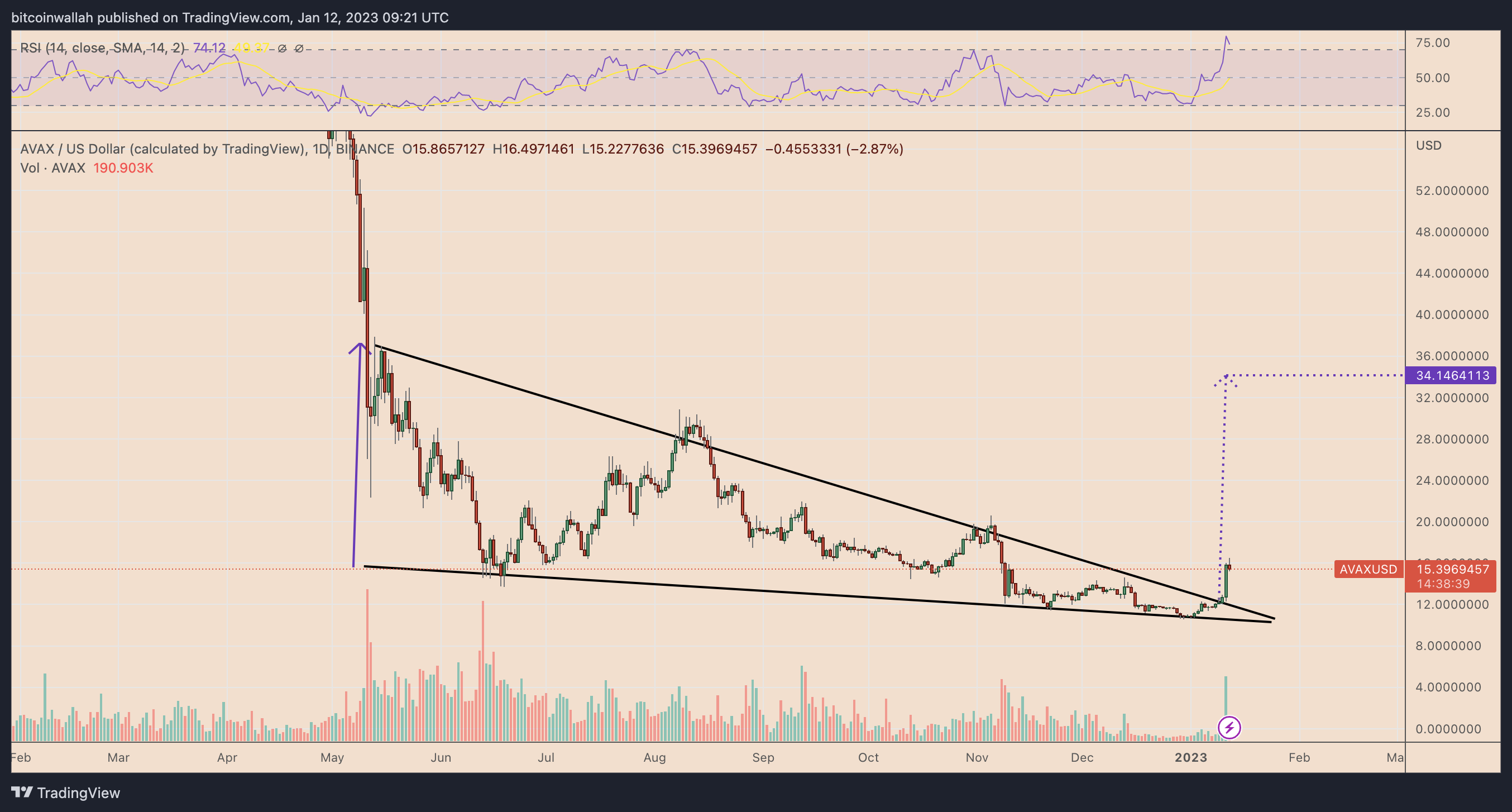 Applying the theory on AVAX’s falling wedge pattern brings the token’s breakout target at around $34, up approximately 115% from current price levels.

Notably, the firm will implement new features that make it easier for developers to run an Avalanche node through the AWS Marketplace. In addition, developers will be able to create Avalanche subnets with a few clicks.

The partnership will increase Avalanche’s utility among enterprises and governments in a perfect scenario, which, in turn, could boost demand for AVAX tokens. These prospects have helped the Avalanche token rise nearly 30% on a 24-hour adjusted timeframe.

Amazon partnership should get us this pump. Are you ready ? pic.twitter.com/6fCBZ6rbXo

AVAX’s bullish falling wedge setup emerges also amid an improving macroeconomic fundamentals for riskier assets, which may benefit the crypto market on the whole in the coming months.

Notably, economists are unanimously positioned for a drop in the U.S. consumer price index (CPI), according to a Bloomberg survey. Ideally, lowering inflation may prompt the Federal Reserve to stop its interest rate hikes, which leaves investors with excess cash to invest in riskier markets.

Thus, AVAX/USD could rise alongside the U.S. benchmark index on a lowered inflation reading, and continue rallying at least until the Fed’s meeting on Jan. 31.

Meanwhile, AVAX shows signs of indecision near $15.75, a resistance level that was strong support during the June-November 2022 session.

If the price fails to close above the said resistance line decisively, then the likelihood of a correction toward its next support line near $10.50 will increase. The same level was instrumental as support in June-July 2021 session, as shown below.

In other words, AVAX risks a 35% drop from its current price levels, a move that could invalidate the falling wedge setup altogether.